You can’t put a price on love, right? Everyone from Shakespeare to John Lennon has been telling us that for centuries, but the data tells a different story.

Online dating is a $3 billion industry, and it’s expected to grow in the coming years as more singles turn to technology to find love, romance, and (let’s be honest) hookups.

Are you thinking about getting into the dating app business? If so, we wrote this blog post with you in mind. Below you’ll find our top 10 dating apps of 2023, along with our assessment of what makes them so successful.

What’s Our Criteria for a “Top” Dating App?

One thing to note is that this list isn’t relegated to the highest revenue-producing apps like Match, Bumble, and Tinder. And it’s not just a list of the top-rated apps based on their total number of users. Of course, the big ones, which target a general audience, made the list. It’s important to study the giants and see what they’re doing right. However, we also chose to include well-designed niche sites.

Why Include the Smaller Apps?

Let’s be real, if you’re going to enter this lucrative (but crowded) field, you’re better off finding your own niche. You can always expand as you grow, but your initial launch will have to offer something unique in order to get traction. Study both the big sites and the smaller ones to gain inspiration and plan your path forward.

A Word about Match Group

Now is as good a time as any to mention that Match Group owns four of the apps listed in this blog post (Tinder, Hinge, OurTime, and OKCupid).

No, they didn’t pay us to list their apps! They just dominate so much of the market that you can’t avoid them when talking about dating apps. It also makes these websites worth highlighting for app entrepreneurs because having Match Group acquire your company for millions (or billions) isn’t the worst exit strategy in the world.

When You’re Ready to Design and Build Your App

When you’re ready to begin, talk to a specialist here at Net Solutions who can help you explore your options. We’ve designed and built hundreds upon hundreds of apps for our clients, including some dating apps. 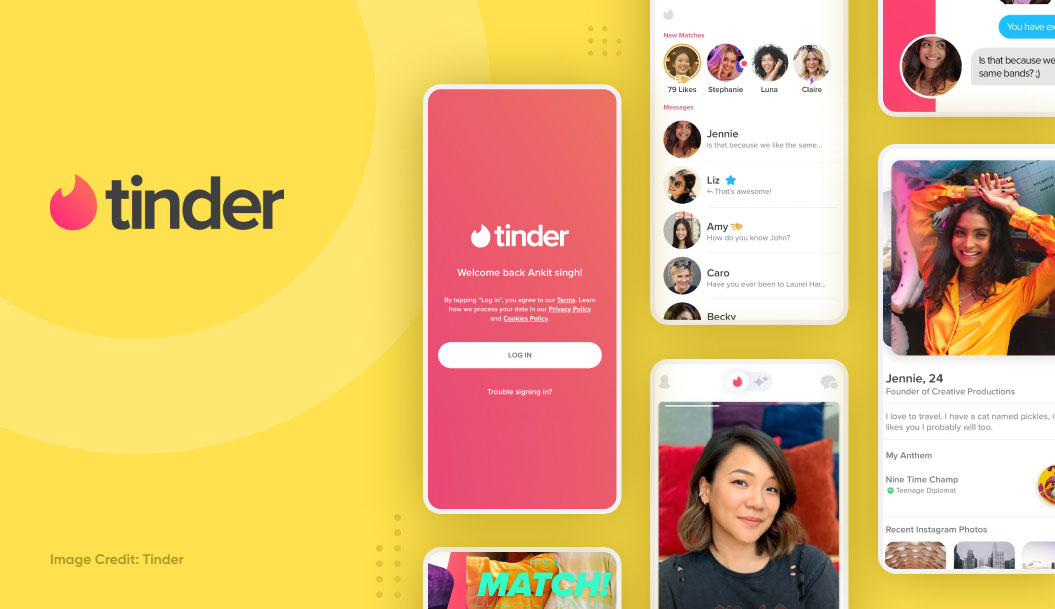 Tinder is a dominant force in the dating world, bringing in $1.4 billion USD last year. Purchased by Match Group (the makers of Match.com) in 2017, Tinder has users all over the world.

It’s got a reputation as a “hookup” site in the U.S. where it started. However, now that it’s become a worldwide phenomenon, many use it the way they would use an ordinary dating site. This is especially true in parts of the world where none of Tinder’s competitors have taken hold.

Tinder pioneered the swiping phenomenon. Do you like what you see in a random profile pic that pops up? Swipe right. Not feeling it? Swipe left. When two people like each other, they’ve matched and they can start communicating.

Many complain that Tinder is a shallow platform, since people mostly swipe left or right based on appearance. There is a short space for a bio where you can describe yourself, but it’s not front and center.

Still, Tinder has managed to dominate the world’s dating market, so it seems they capitalized on what we’ve all suspected from the start: Humans are shallow. And freaky.

What made Tinder successful? 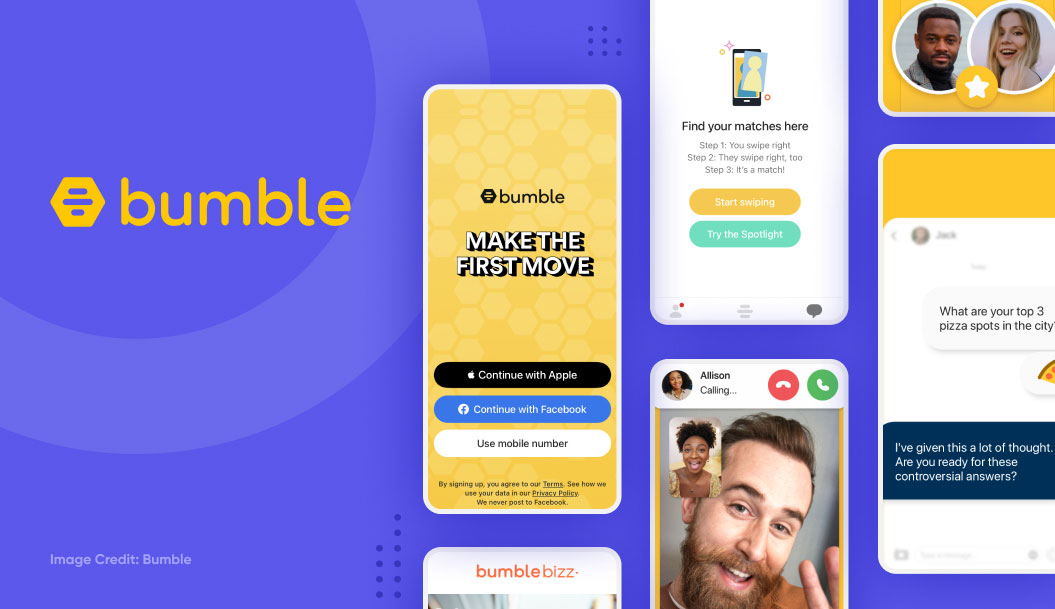 Whitney Wolfe Herd, former VP of Marketing at Tinder, founded Bumble as an alternative to her former employer’s app. Her goal was to create a platform where women would have a bit more control over their dating experience, which she achieved with a “women message first” policy.

What that means is that if a man and a woman match, the woman has 24 hours to message the man until the connection disappears. Men can’t write until the woman does. This means women aren’t bombarded with messages, and many believe the shift in power dynamics ends up with fewer predators using the app.

Whatever the case, Bumble has found a winning formula that earned over $300 million last year. Not bad, Whitney. Not bad at all.

What made Bumble successful? 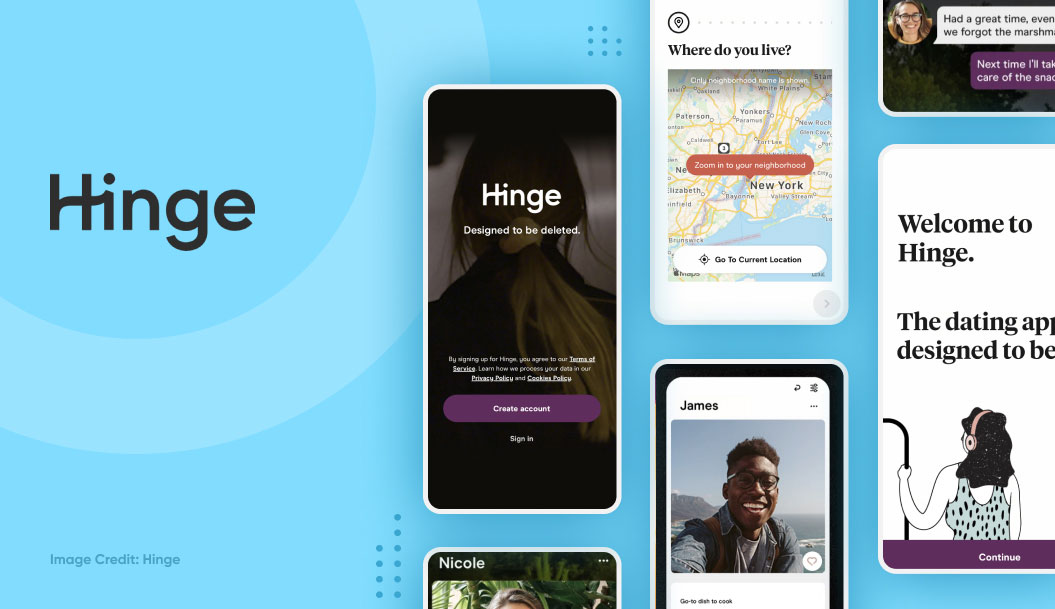 Hinge positions itself as the relationship app, and its tagline is: “Designed to be deleted.”

Hinge is basically the anti-Tinder, which is funny because it’s now owned by Match Group—the conglomerate that also owns Tinder (and two other apps on this list).

What made a huge entity like Match Group acquire 51% of Hinge in 2018? Hinge, like the others they absorbed on this list, managed to carve out its own place in a crowded market.

Rather than showing users an endless stream of options that encourage infinite swiping, Hinge shows a select group of nearby users. It also lets users feature a more in-depth profile than either Tinder or Bumble do, since people looking for a life partner are interested in more than just appearance. Plus, the platform can recommend friends-of-friends on Facebook if users choose that option.

In 2020, Hinge earned over $16 million dollars in revenue. How many people found their true love on the app? One study found that Hinge was responsible for pairing 12% of 2019 newlyweds who met online.

What made Hinge successful? 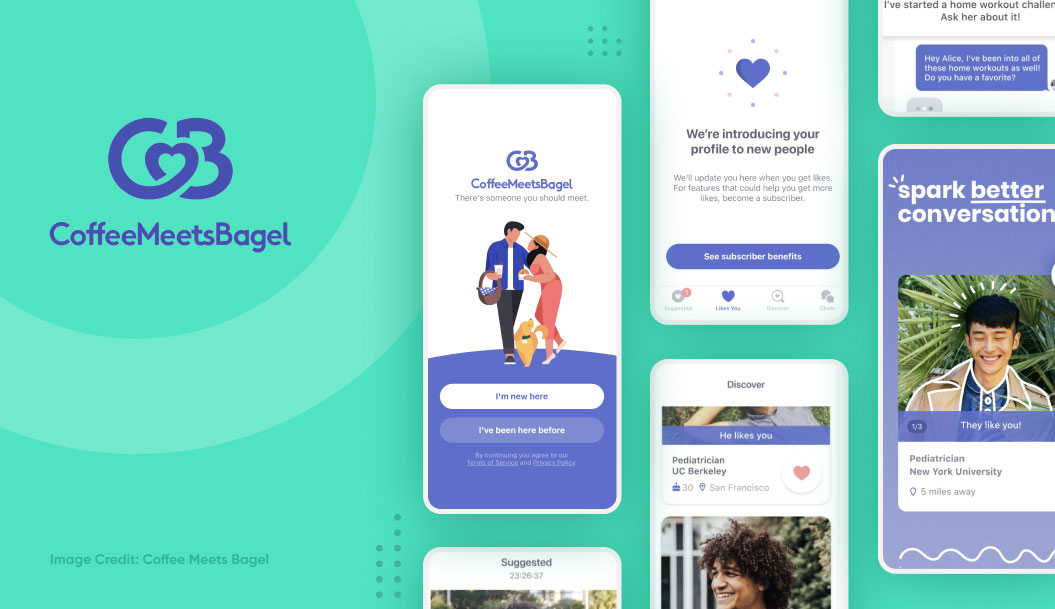 While that may seem limiting in a world of endless choices and instant gratification, research shows that excess choice breeds apathy. In other words, if you give someone a choice between 10 different types of any consumer goods, they’re less likely to be satisfied with their decision than if you give them two or three options. It’s true for toothpaste, and it’s true for lovers.

What made Coffee Meets Bagel successful? 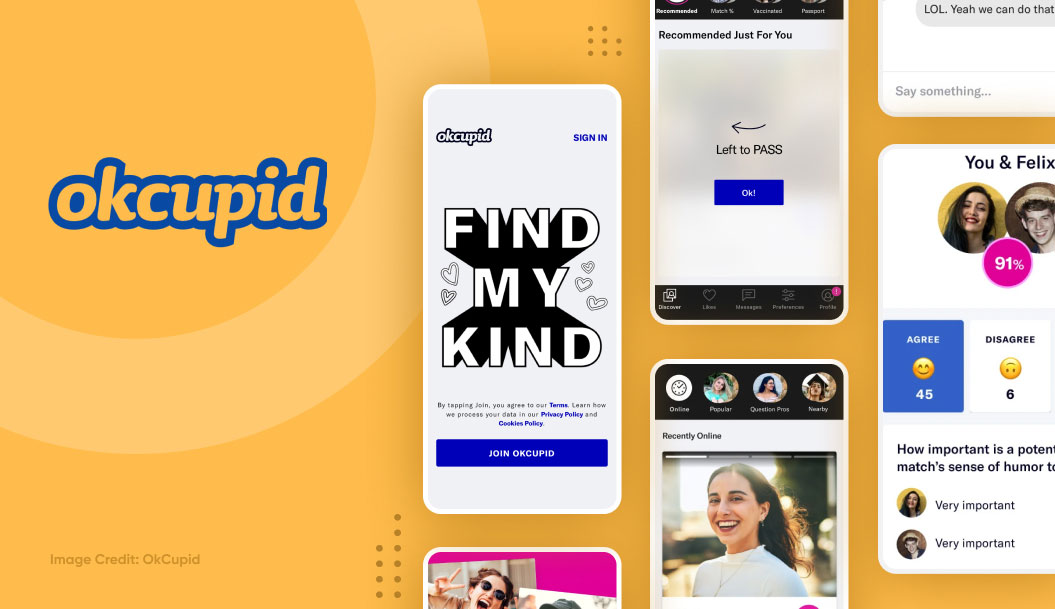 OkCupid got its start as the quirky, urban, hipster alternative to Match.com. If Match.com was the Taylor Swift of dating apps, OkCupid was the Billie Eilish.

Today, of course, Match Group owns OkCupid—and many former users claim it has lost its indie charm. Still, in 2020 the platform managed to earn over $200 million in revenue, so clearly they’re doing something right.

Match Group was smart to keep one of OkCupid’s core features that’s been there from the start. The system asks an endless series of questions (seriously, you can answer thousands upon thousands of them) about religion, politics, values, sex, and life. Users answer these questions, rank how important the question is to them, and decide how they’d like their ideal partner to answer. The system then tells you how closely you match with potential suitors.

What made OkCupid stand out? 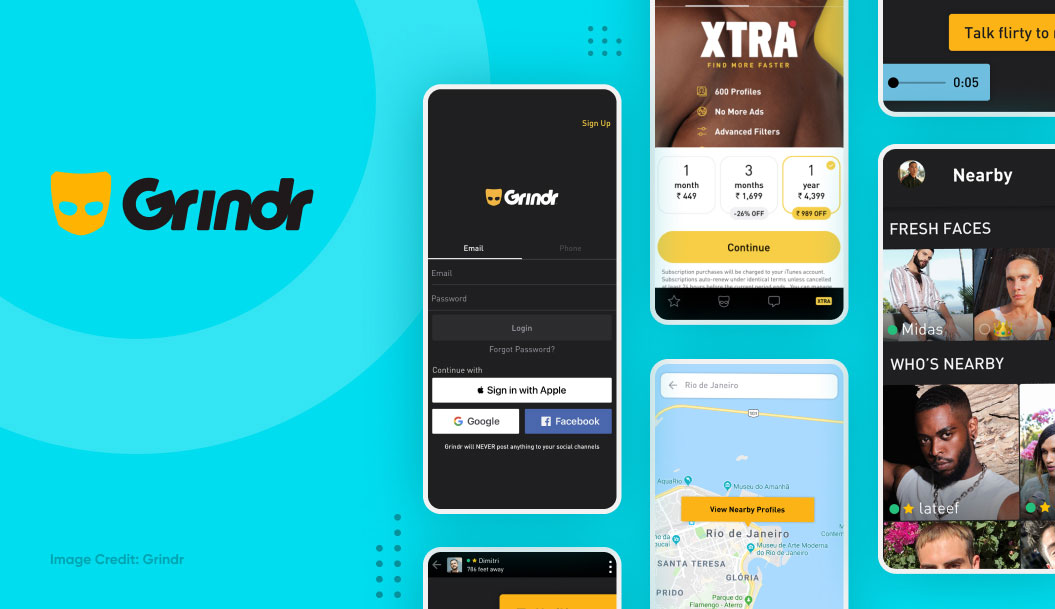 Grindr was valued at $600 million when it was sold to a Chinese company, so while it’s technically a niche site (targeting men who date men), it’s by no means small. Grindr is, in fact, a perfect example of how an app that doesn’t try to be all things to all people can become wildly successful. There are similar sites for women seeking same-sex partners, but so far no LGBTQ+ app has made quite the splash that Grindr has.

What made Grindr stand out? 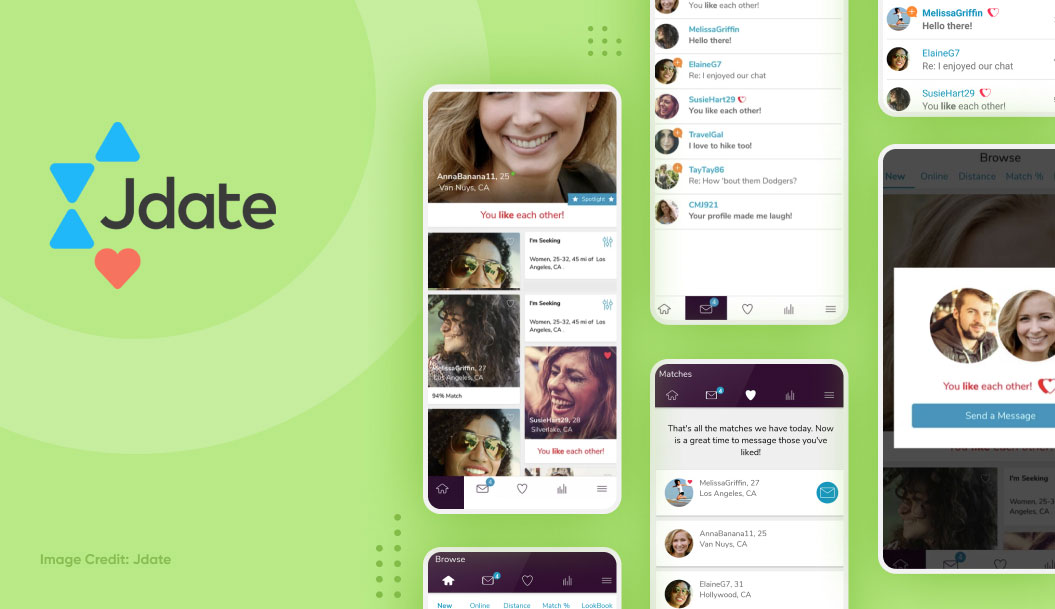 JDate connects Jewish singles, and that includes everyone from the deeply observant to the culturally identified secular crowd. They also make room for gentiles who have an affinity for Jewish culture. The platform makes it easy for members to filter their search based on which stream of Judaism a potential match belongs (Orthodox, Conservative, Reform, or another stream).

JDate became a model for other religious dating websites and apps. Some similar, thriving apps include Christian Mingle (for Christians), Shaadi (for Hindus), Salams (for Muslims), and others.

What made JDate stand out? 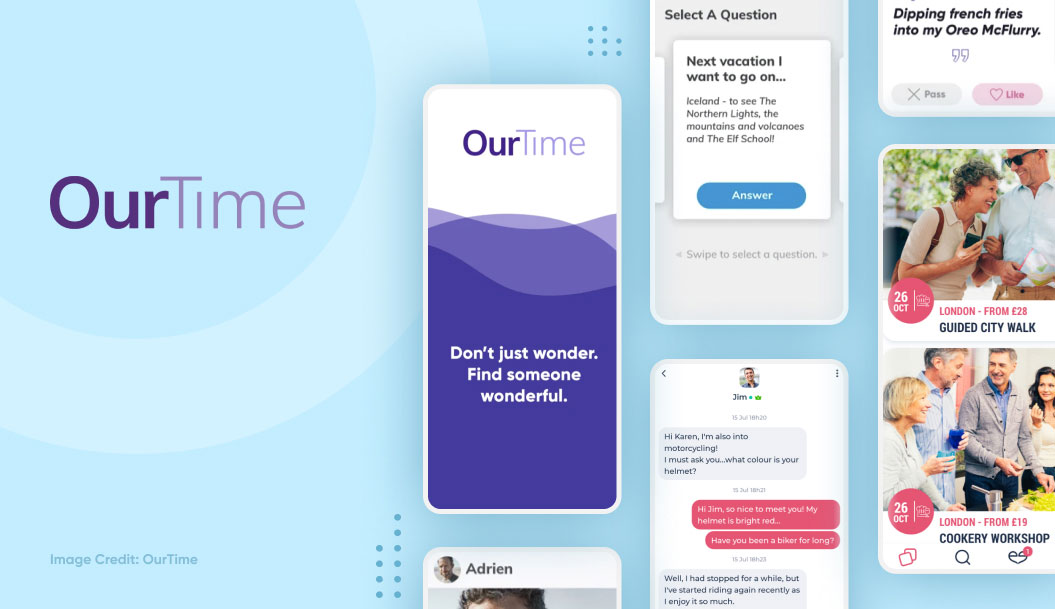 OurTime is yet another dating app that Match Group acquired, and it specifically targets people aged 50 or older who are entering the dating world. Considering that roughly half of all marriages end in divorce, OurTime found itself a solid niche. It also doesn’t hurt that apps like Tinder aren’t very welcoming to mature users (in fact, Tinder charges older users more to use the platform).

What made OurTime stand out? 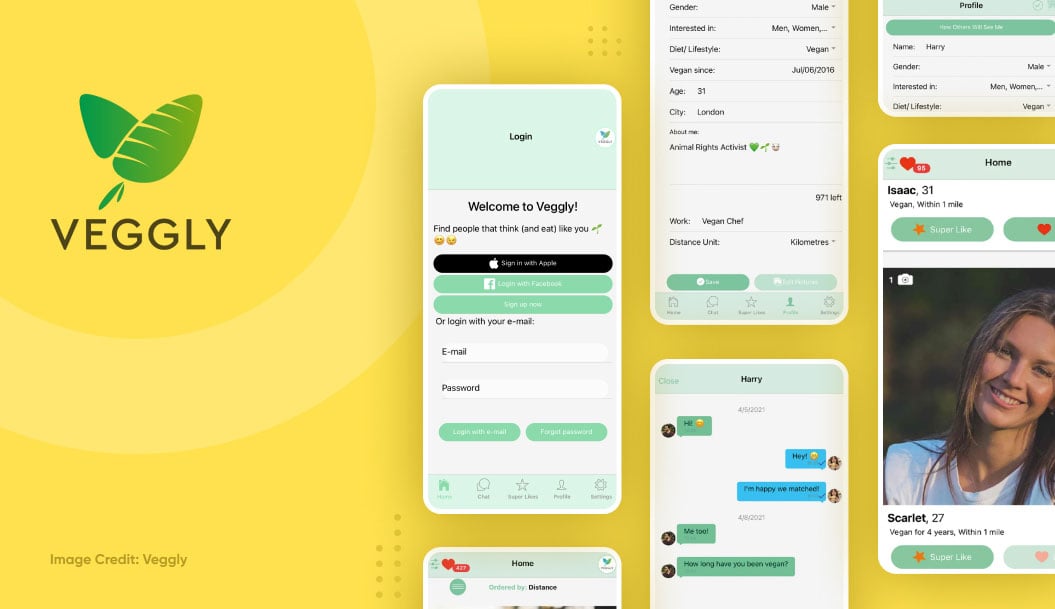 Vegetarianism and veganism has seen unprecedented growth in the past 15 years across the United States and Europe. In the U.S. in particular, one survey found a 300% increase in the number of vegans between 2014 and 2019. That’s a lot of vegans, and since they tend to be a more urban, professional market segment in the west, they make for a pretty good niche.

Still new to the dating world, the Veggly app has more than 100,000 installs. No, that’s not a lot compared to the big apps, but it’s leading the pack among vegan and vegetarian apps—so we’re expecting big things.

What made Veggly stand out? 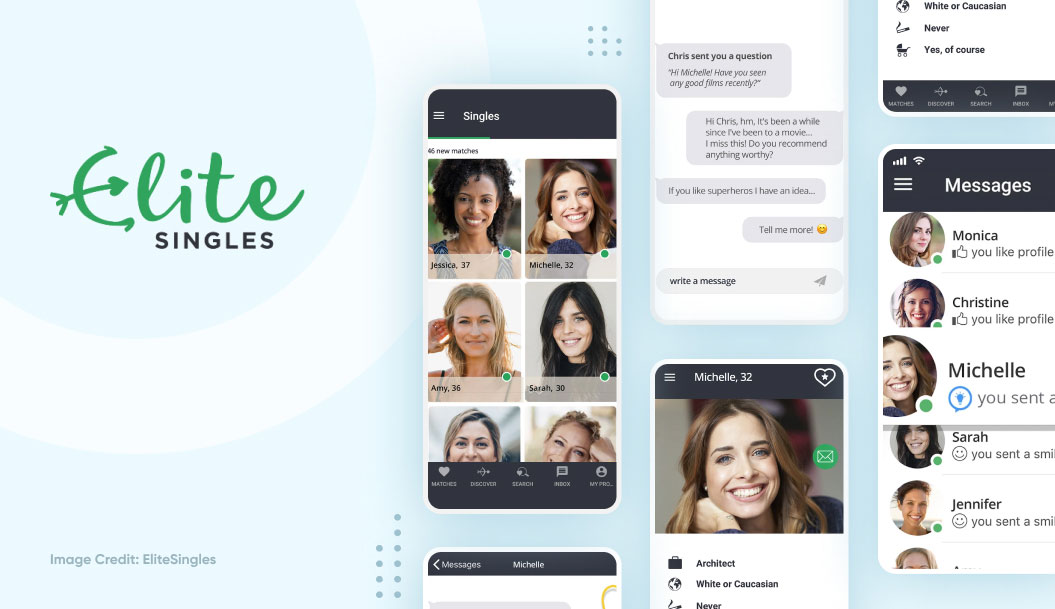 The Elite Singles platform boasts that over 90% of its members are highly educated and over the age of 30. It targets ambitious professionals with solid careers and big dreams—a market that Tinder and more youth-focused dating apps neglect.

What made Elite Singles successful?

Some apps can grow incrementally, one user at a time. For example, if you create a sports app that tracks game stats, it doesn’t matter how many other users are on the platform. Dating, however, is inherently social, and an app without enough users will struggle to get more users. This is the bootstrap problem when it comes to dating apps.

How do you solve the bootstrap problem? One way to get around this issue is to launch your beta platform for free, since “top free dating apps” is a popular Google search phrase. No need to keep your services free forever, but in the beginning, people will be reluctant to pay for an app with very few users.

Nomad Soulmates: A Strategy Worth Studying

One platform worth studying in this regard is a startup called Nomad Soulmates. It targets a growing community of location-independent professionals who work while they travel the world.

Nomad Soulmate’s founder Aline Dahmen is a nomad herself who built a Facebook group for digital nomad singles and grew it to thousands of members (currently 15,000+ at the time of publication). She launched her dating website first, and she plans to launch an app in the future.

Aline seems to have the digital nomad market on lock, so we wouldn’t recommend going after that segment. That said, her story is a great example of how to deal with the bootstrap problem inherent to dating sites. Find yourself a niche, grow a community within that niche, and then create your platform.

Finding Your Place in the Dating App Market

Love is big business, and the dating app market shows no signs of slowing down. As we’ve pointed out, each of these top-rated dating apps found unique ways to serve in the mobile app development market, but they had one thing they had in common: they figured out what their market wanted—and delivered it.

Do you have an idea for a dating app with a unique approach? Contact us here at Net Solutions for a free consultation, and we’ll explore ways of making your vision a reality with our proven mobile app development solutions.