Why Kotlin is the Future of Android Application Development

With Google itself becoming Kotlin oriented, many developers are moving towards adopting it, and the fact that many Java apps are being rewritten in Kotlin now, is a proof to it being the future of building Android apps. The way Swift assured the death of Objective C language, Kotlin is all set to push out Java from the Android app development ecosystem.

Kotlin has made many developers reassess their approach to create apps considering that Java has been the foundation of innovative products for Android users, programmers, and coders since a long time.

Kotlin was developed in the year 2011 by the programmers of a software product development company called JetBrains in Russia and then augmented by several open-source developers. In 2019, Google revealed Kotlin the most chosen language for app development.

Kotlin is relevant today because it is open-source and offers extensive features in mobile app development services. It has been a solution to Android developers’ problems for a while. It solves the queries that surface in Java, giving developers flexibility, safety, clarity, and tool support. Kotlin has fixed many of the nagging issues present within the Java language.

For example, the null references in Kotlin controlled by the type system. Kotlin has proper function types, and it has no raw types. The arrays in Kotlin are invariant. It also does not have checked exceptions, as Java does.

The Key Benefits of Adopting Kotlin

Organizations are adopting Kotlin for their development requirements. It is a supported language to write Android app codes. Transitioning to Kotlin is one of the best decisions an organization can make. Here’s are the key benefits of Kotlin:

One of the primary reasons why developers prefer Kotlin over Java is the brevity that Kotlin offers. Java seems quite repetitive in comparison. Brevity ensures that there are lesser errors in code. It also implies a much faster rate of production.

Since 2012, JetBrains declared Kotlin to be an open-source project. As an open-source language, a developer can expect high-quality development all the time, by getting considerable support from the Kotlin Slack team.

3. It is a Mature Language with a Great IDE Support

Kotlin was first created for use in the year 2011 and finally saw its first official release in 2016. It went into several stages of alpha and beta improvements before the final version.

It means that even before release, Kotlin was already used in several projects. It is practical with proven features from other programming languages and world-class IDE support. The IDE plugin works in the case of Kotlin and allows several of Java’s popular features.

4. It Provides a More Natural Way to Develop Android Apps

Kotlin is a simple yet powerful language when compared to other languages. While Java suffers from some rigid issues, the other programming language Scala is dense with slow compilation time. The library required to write Android apps with Kotlin is very small and doesn’t increase the method count much.

5. It is a Swift Language for Android App Development

Kotlin integrates with Android Studio, and this makes it fast. A Kotlin project can be set up to function in less than 10 minutes, even for a first-timer.

Android 2.3 requires a plugin to integrate with Kotlin, while Android 3.0 integrates with it. Like Java, it can work from the IDE. It can also debug without any hiccups. All these features of Kotlin work well with many other things that Java is capable of.

6. It is Reliable Due to its Developmental Process

One of the reasons why Kotlin came into existence is because its parent company JetBrains had some specific requirements from a programming language that they were going to use themselves. It also offers practical value for its parent company, which uses it for its line of products. It makes them interested in further developing it. With Google support, two innovative companies are working together towards their development.

JetBrains has not only put in significant efforts in the initial idea of the language as its history suggests but is also making substantial alterations to it for its future success. Features like the Kotlin Android Extensions, libraries like Anko, continuous library size optimizations, and build times suggest JetBrains’ commitment towards the further development of Kotlin for Android mobile app development.

7. Developers Must Move Away from Becoming Obsolete

Once developers start using Kotlin, they realize that using a modern language makes their work processes more efficient and their minds more creative. Java has been around for ages, and in a way, has become obsolete.

Using a modern language allows for different ways of thinking, which is critical for a developer as it reflects in their work. It also makes the developer more versatile as their propensity to understanding and using similar programming languages increases. All these elements add value to a developer’s profile.

8. It is Much Safer than Java

Kotlin is a much safer option than Java. One of the major problems with Java lies in the design of the language itself, which leads to extra work. Hence more money and time spent on the project.

For example, nulls are the most error-prone points when working with Java. Bug managers face 90% of the errors being the Null Pointer Exception. Whereas in Kotlin, nulls do not exist unless otherwise stated.

No variable by default can be set to ‘null’ in Kotlin. If a developer wants a variable to accept nulls, he has to mark the type with a ‘?’.

From there on, the compiler will force the developer to check ‘null’ before doing anything with the variable. Due to this, a Null Pointer Exception does not occur in Kotlin.

Like other Java compatible languages, Kotlin is more comfortable to learn. It can easily read by someone new to the language as the code is easy to understand. It also helps keep away from errors.

It is a language that resembles what a Java developer already understands. The only intricate part of Kotlin is the elements that Java lacks. Kotlin opens up possibilities for developers to be more creative and solve problems.

Why Businesses are Gravitating Towards Kotlin

For a business, moving to a new tool is a well-thought decision. Any new tool being deployed aims to solve an existing problem in a simpler and better way. Several businesses recently have shown their support towards Kotlin by embracing it for Android app development. The most common reasons are:

the community of Android app developers

Kotlin is here to stay, and businesses must take cognizance of that if they haven’t already. Therefore, choosing an appropriate android mobile app development technology stack is an essential step towards app development for any business. Kotlin provides an effective solution due to the speed, accuracy, flexibility, and stability it offers to solve complex business challenges.

Net Solutions has also adopted Kotlin as an Android app development language for its projects. 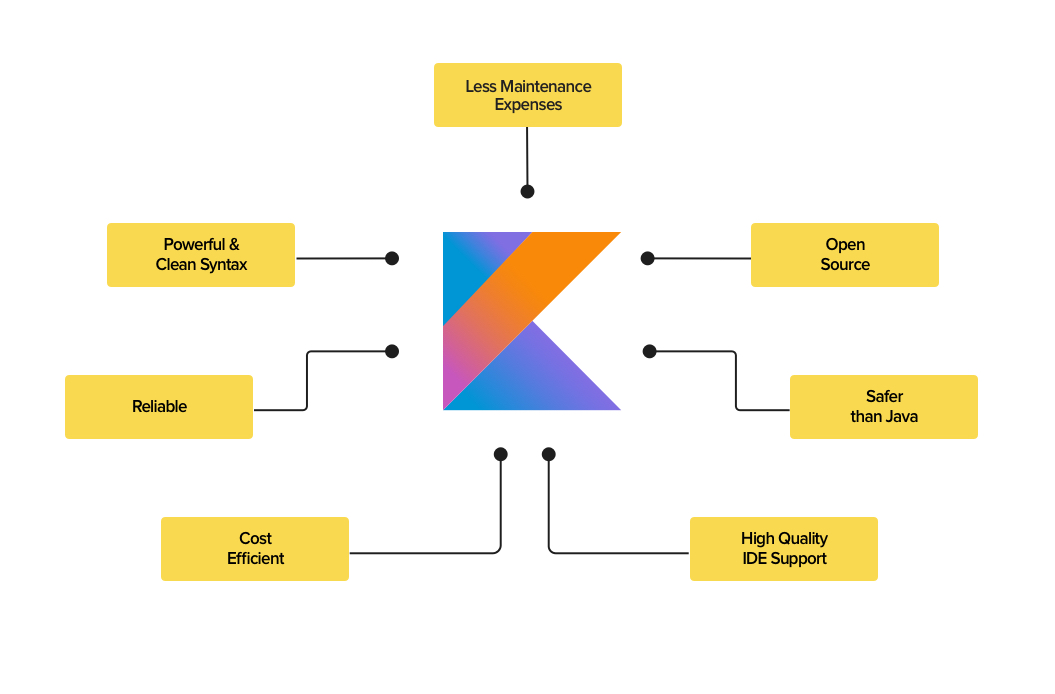 We consider Kotlin to be a good fit for our app development process due to a variety of reasons.

Finally, we are well aware that Kotlin app development is a result of the developer community‘s feedback over the years. It is more intuitive to developers’ requirements. It is primarily focused around the development of the Android ecosystem and is helping it evolve further, and that is why Net Solutions widely uses Kotlin for its Android projects.

Kotlin is 100% suitable for Java, which means it is convenient and possible for both small and large organizations to seamlessly transition themselves to Kotlin. The programming language has numerous advantages for Android app development companies and Android app developers, some of which are stated in this piece.

Many businesses are increasingly making Kotlin their official programming language, and the surge in demand for Kotlin developers is almost certainly soon. Kotlin is a friendly language for developers, and it allows them to conceive newer solutions to regular problems. So, while you decide to move to Kotlin, remember to make it a well-planned task along with utilizing the expertise and experience of developers.

Thanks for sharing this amazing article! Kotlin was developed as a solution to the problems that Android developers have faced over the past few years. kotlin app development is now increasing day by day.

The information you provided is very helpful for Android App Development learners. I appreciate it. Keep up the good work!!