Flask vs Django in 2022: Which Framework to Choose and When?

Everyone loves Python and its amazing frameworks. Among the set of many Python frameworks, Flask and Django are the biggest talks of the town. Unsurprisingly, everybody is now curious about how Flask & Django are different and how to choose between them.

If you, too, are deciding on which one to use for your next web application development project, honestly, you will hardly go wrong with either framework. Both are extensible, mature web frameworks, which offer similar functionality in handling requests and serving up documents.

However, both differ in their scope of responsibilities. While one is a full-stack framework, another is a power-packed micro-framework catering to the needs of modern web development solutions.

When there is such immense competition amongst the Python development world’s two biggies, confusion is inevitable. So let’s clear the clutter of Flask vs Django starting from the very basics to set you on the right track of web development.

What is Flask and Django?

Flask and Django are both open-source Python-based web development frameworks designed to ease code complexity for developers. While Django is a full-stack framework, Flask is famous as a micro-framework that is light-weight but extensible.

Initially launched in 2010 by Armin Ronacher, Flask is known as a micro-framework as it has little or no dependencies on external libraries. Using it, developers have the flexibility of choosing design patterns, tools, and databases. Thus, flexibility is the main feature of this python framework.

Since the web development industry is now leaning more towards micro-services and server-less platforms, Flask’s popularity is continuously rising. It is widely used for building scalable web applications effortlessly. All thanks to its unique features. Launched in 2005, Django is a full-stack framework designed with the primary goal of making the development of complex database-driven websites easy. It facilitates secure and faster development by freeing developers from performing repetitive web development tasks. With many excellent features, it enables developers to create robust and high-performing applications.

Another USP of the Django framework is that it is an easy-to-scale and secure web framework, so it is perfect for developing enterprise-level applications. Supporting multiple formats (like XML, HTML, JSON, etc.), Django lets developers focus on developing the web apps’ business logic and eliminates the need to create apps from scratch. 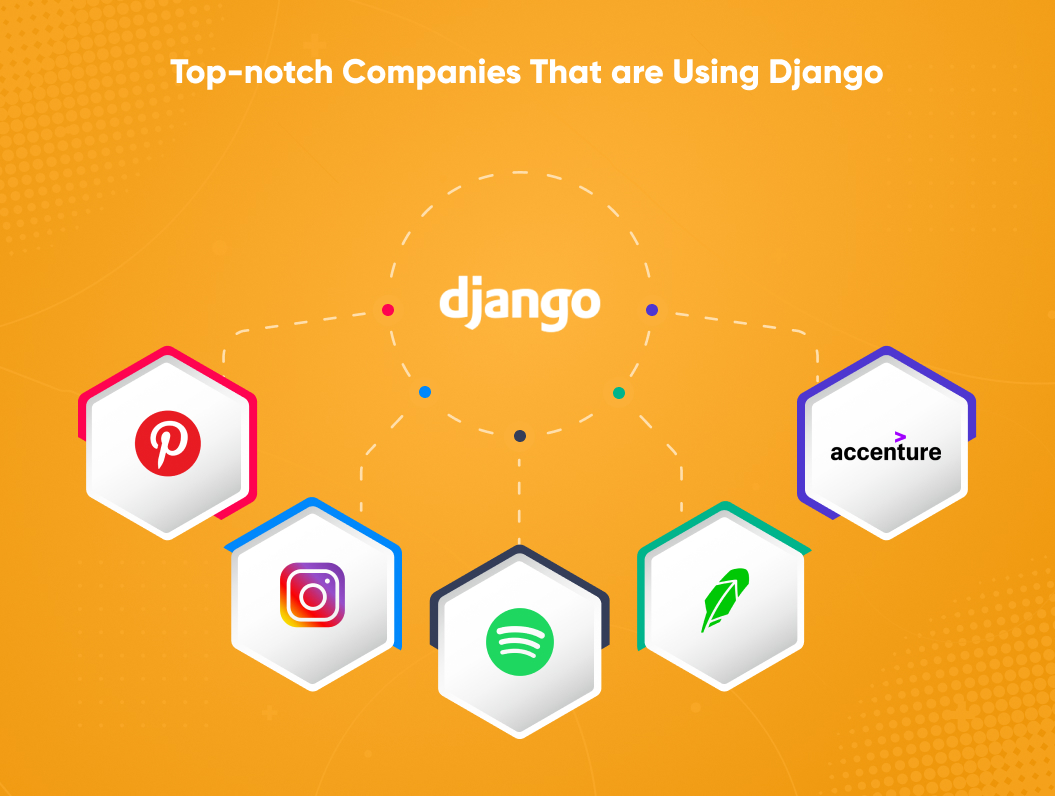 What is the Difference Between Flask and Django?

While Flask and Django are both Python frameworks suitable for developing web apps that are high performing and easy to scale, they are very different from each other. However, the goal of comparing them shouldn’t be to declare which is better.

Both frameworks are suitable for rapid app development but vary in their use cases. So, the goal of their head-to-head comparison should be to analyze the key points that will let you make an informed decision, depending on your business requirements.

So, let’s deep dive and analyze the differences between Django and Flask:

Which is Better – Flask or Django?

Selecting the right framework for developing your website is as important as deciding on your app features, programming language, and budget. Making an informed decision will help you limit your development cost and scale as your app grows.

So, let’s compare Flask and Django against several factors to find the right web development framework for your web application.

Django comes with a tagline–The web framework for perfectionists with deadlines. To achieve narrow deadlines, it is important to build web applications quickly and efficiently. And web development with Django is rapid and effortless.

The Django official website quotes, “Django was designed to help developers take applications from concept to completion as quickly as possible.” Django’s ability to deliver quick outcomes makes it an ideal solution for building large applications.

Flask framework, on the other hand, comes with a slogan–Web development, one drop at a time. Moreover, the Flask official website claims it to be a “microframework for Python based on Werkzeug, Jinja 2 and good intentions.” With ‘microframework’, it means that Flask aims to be as simple as possible yet still extensible.

Its simplicity, flexibility, and lightweight paves the way for developers to build smaller apps in short timeframes.

Another reason why Python’s Flask performance is better than Django in terms of speed is that one can write 10k lines of code with Flask for something that would take 24k lines in Django. Thus, in the Flask vs Django performance battle, Flask outsmarts Django depending upon the project requirements.

If you ask why use Django over Flask, here is your answer: Flask is everything you need and nothing you don’t.

As aforesaid, Flask is popular for bringing minimalism and simplicity to work. Flask comes with no restrictions, thus allowing a developer to build a robust application with the liberty to use everything they deem fit– a vast array of external libraries and add-ons.

Flask, in its documentation foreword, says that “Flask won’t make many decisions for you, such as what database to use. Those decisions that it does make, such as what templating engine to use, are easy to change. Everything else is up to you so that Flask can be everything you need and nothing you don’t.”

Django, on the flip side, is dispatched with its own set of modules and built-in features, thus shackling the liberty to experiment and control. The batteries included in Django allow developers to build a variety of web applications without using any of the third-party tools and libraries.

If you want to develop a highly scalable web application, Django is the best option for you as it provides complete scalability options. It is a component-based framework that follows the “Don’t repeat anything” principle.

Each layer of the app is independent of the other, meaning that you can scale the app at any level. Additionally, it uses load balancing and clustering for running the app across various servers. Thus, you can scale your web app in Django effortlessly while maintaining flawless performance and loading times.

Flask is also highly scalable as it can process a high number of requests each day. This micro-framework modularize the entire code and let developers work on independent chunks and use them as the code base grows. However, as compared to Django, Flask’s scalability is limited. For example, it can’t scale when servers support global as well as local proxies.

Django was initially released close to 1.5 decades ago, in 2005. Today, it enjoys a large community of active developers who have come up with a variety of plugins, extensions, and third-party applications to cater to the rising web development needs. At present, Django has evolved into a mature platform, which leverages the benefits of a knowledgeable community.

On the other hand, Flask was released close to a decade ago, in 2010. It is a relatively young tool but still boasts a large community. Thus, it might lead to a lot of support in case you get stuck with something.

Based upon the above-mentioned statistics, no doubt, in Django vs Flask popularity, Django is a little above Flask in the case of stars and watchers. However, both frameworks are almost neck to neck. Thus, considering the community as a parameter, you can avail the benefits of huge support for both frameworks.

Django comes with an admin system that paves the way for you to quickly create an internal tool for managing the data from your data models. It runs on ORM (Object Relational Mapper) database system and directory structure. In the case of Django, multiple projects have the same directory structure. Thus, developers feel that it is an all-inclusive experience.

When looking for a web app to launch quickly, the Django Admin is considered an easy way to provide a simple interface for managing application data. With just a few lines of code, you can come up with an app whose look and feel of admin can be customized as per your preference.

On the other hand, Flask does not come packaged with any sort of admin interface. If you want to have an admin system or use an ORM, you’ll need to install custom modules. The extension Flask-Admin provides something that allows developers to have the same experience as with Django. But as compared to Django, it is a little more complex to set up in the case of Flask as you have to integrate it with whatever authentication scheme you implement.

Now before we reach the conclusion of the discussion between Python framework Django vs Flask, let’s discuss their use cases:

When to Use Flask?

Here are some of the use cases of Flask:

When to Use Django?

Here are some of the use cases of Django:

As mentioned earlier, your choice between Python Flask vs Django depends completely on the particular business context of your company. You can even use both of them together depending on your business needs. For large enterprise-level apps, using Flask with Django is sometimes the best approach – combining the smaller components from Flask and Admin Panel from Django.

Now that you know what works best in different situations, find out the problems your web app should address and select the right framework for yourself. Or, consider hiring a proficient tech partner to help you decide the same.

One of our clients, EMR, wanted to develop a bespoke decision support engine that empowers the healthcare staff to easily and quickly write, change, and test rules that facilitate patient data.

The aim was to give control to the admin of the platform to let the staff choose what criteria they want to feed into the system without any dependency on the technology team to write a code every time.

Based on the requirements finalized, the technology panel of Net Solutions decided to use Django Framework for the back end. Flask vs Django: Which One to Choose?

In a nutshell, both Flask and Django are popular open-source Python web frameworks. Django is a powerful full-stack framework, whereas Flask is a micro and lightweight framework. There are no set of rules as to what one should use. However, choosing a framework because you used it on your latest project or are more familiar with it is definitely not the way to go forward.