PoC vs MVP vs Prototype: What Strategy Leads to Product-Market Fit?

When developing a new product, you should emphasize on satisfying the end-users, i.e., creating products that will solve their problems. This, in turn, helps in achieving the product-market fit. The road to achieving it starts with understanding the difference between PoC vs MVP vs prototype. These three concepts help validate the product that further leads to its acceptance in the market.

A thread on product-market fit 👇

The next questions that follow — When to use what strategy? What is the order of their execution? How are they different from each other?

Here is a detailed insight that answers all the questions and safely leads to achieving product-market fit.

PoC vs MVP vs Prototype — An Overview

The process of product validation should be a committed initiative that should follow the chronological order, i.e., PoC > Prototype > MVP. However, you can skip creating a PoC in case the idea has an existing validation in the market. 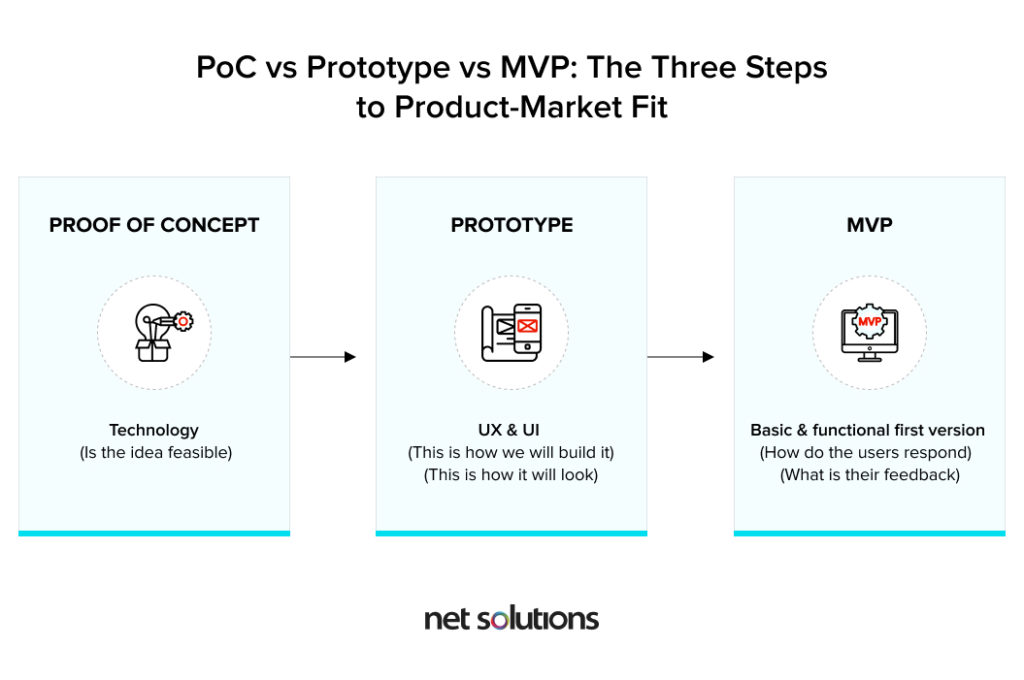 There are times when businesses confuse between PoC vs MVP vs Prototype. This leads to a broken development process that fails to satisfy user needs and expectations.

So, to create an idea that proves to be a cash cow, you need to understand PoC, Prototype, and MVP — the three foundations for the new product development process. Let’s dig deep and see what each of them implies and their role in assuring product-market fit.

What is PoC (Proof of Concept)?

Goal: To find out whether the idea is technically feasible

PoC, an acronym for proof of concept, is the first step to consider before moving ahead with the development process. As the name implies, proof of concept is proof that the idea is feasible and can be converted into a product. 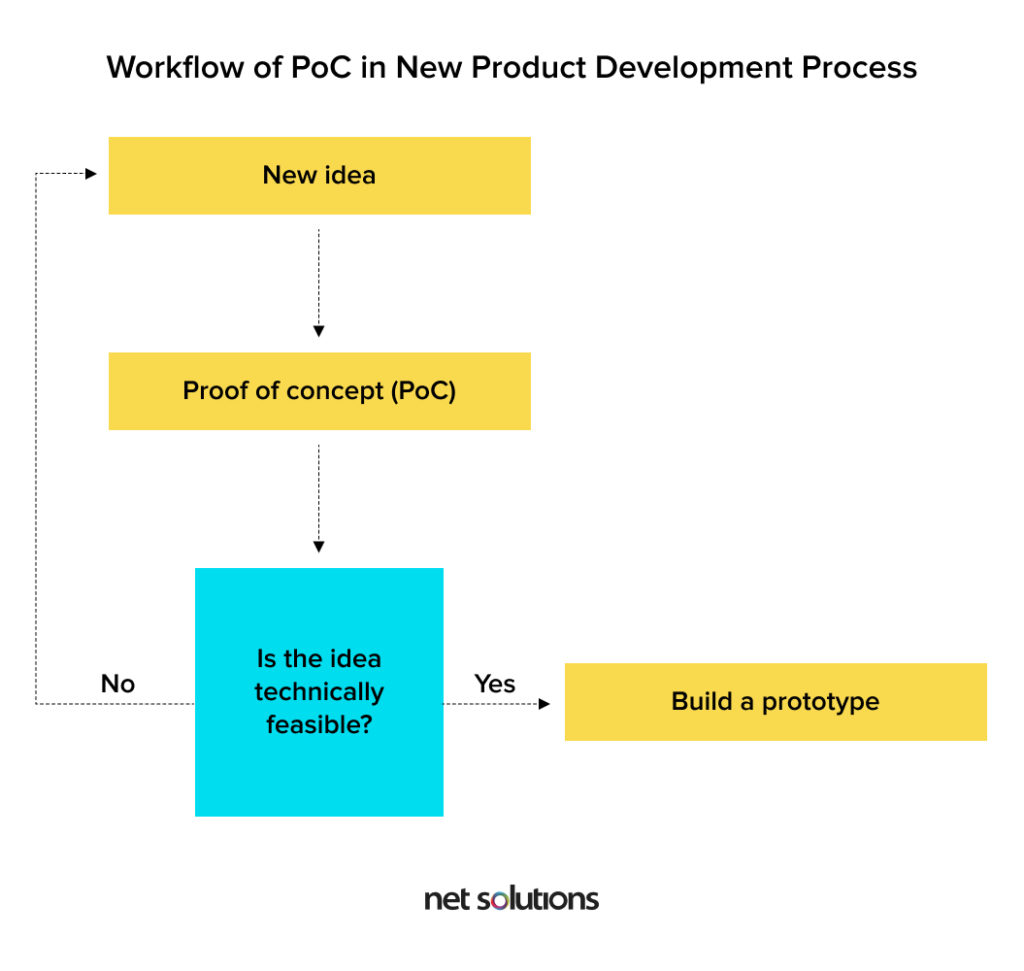 If the concept pre-exists in the market, there is no requirement to build a PoC. But, if your startup is innovating and onto digital disruption — following the PoC strategy helps gather evidence for the practicality of the idea that can be presented to the stakeholders and investors later. When creating a proof of concept for a startup, understanding your expectations from a PoC becomes imperative.

What is the Purpose of a PoC?

In 2009, Twitter released the rough version of OAuth as a closed beta (Application-Only Authentication) on Google’s discussion group. It was a proof of concept validation code that demonstrated the idea and the possibility of executing it.

Today, Twitter’s PoC code for OAuth is the reality of almost every application’s registration and authentication process.

What is a Prototype?

Goal: To demonstrate how the product will look

A prototype is a draft version of the product that focuses on its user experience and semantics. The word prototype originates from a Greek word that means “in a primitive form.”

In Product Development, prototype refers to the alpha grade, i.e., it is the first version that can run to showcase the flow of elements and the overall look and feel of the product. Always create a prototype before moving on to the MVP as you get an idea about what the product will be like from early on.

What is the Purpose of a Prototype?

Twitter rolled out its new prototype app, “twttr” in early 2019, and urged end-users to try-and-test it. Twitter built this prototype to experiment around new features around responses, i.e., it is Twitter’s initiative to make long conversations easy to read.

Here’s an excerpt on how a user reacted to the new “twttr” feature for changed conversation threads.

Hmm unsure how I feel about the chunky blocks. I think they have their place in messaging apps but they look weird indented. I do like the indication of the original tweeter w stripe if color. Playing w/shades of colors or smthng more subtle would be nice #twttr #LetsHaveAConvo pic.twitter.com/uQTOlrM0Mz

What is an MVP (Minimum Viable Product)?

Goal: Launch, learn, and iterate based on user feedback

MVP, an acronym for a minimum viable product, is a workable product that is loaded with only essential features that define the product.MVP Development leads to a standalone application that is launch-ready. Any further product developments and feature additions are then based on continuous valuable feedback that keeps flowing in from the end-users.

A Detailed Look at What is a Minimum Viable Product (MVP)?

Read about what is MVP in software development

It’s the smallest thing that you can create that proves a single premise through validated learning. It should be high quality because, if your premise is correct, you need to incrementally build it out. — Eric Reis, Author, The Lean Startup

We can say MVP in software development is a combination of essential microservices that focus on building one complete thing at a time. The most important thing to remember when building an MVP — do not create messy code in a hurry to launch. The lesser the cruft, the easier it is to iterate and maintain it later.

Yup. Makes no sense to build MVP without serious commitment to refactoring. Twitter

What is the Purpose of an MVP?

A podcast platform Odeo came up with an idea of creating a messaging-based platform that would help people communicate. The platform also called “twttr” supported minimal features and was for internal use only. 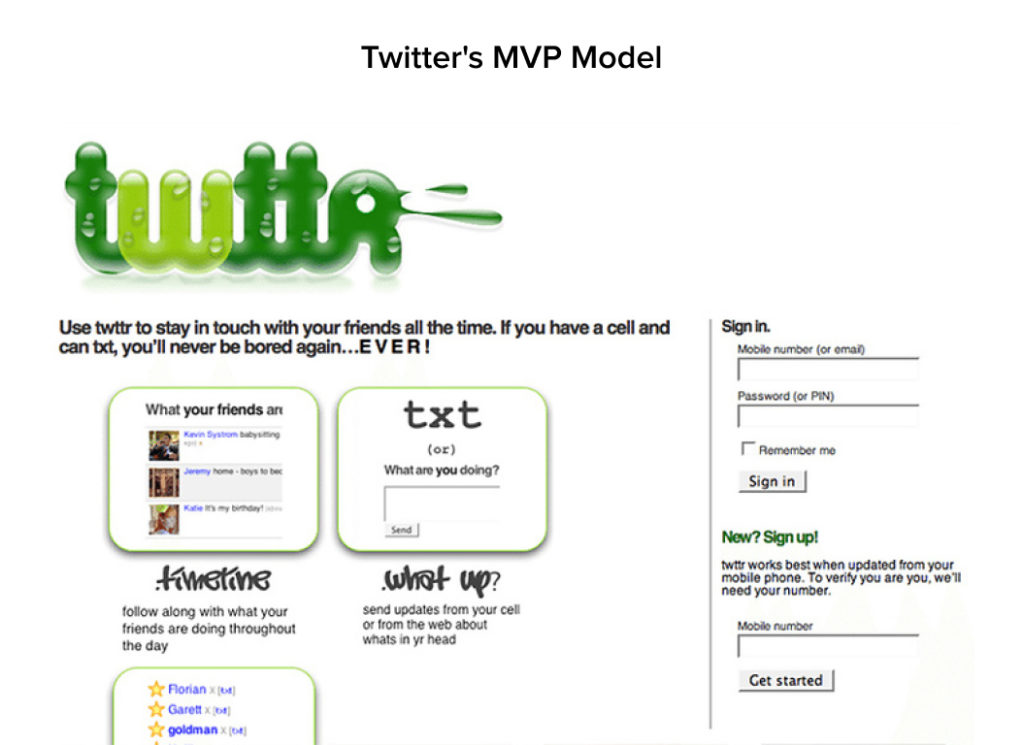 This was Twitter’s MVP, which was later released for public, and was continuously refined based on end-user feedback.

PoC vs Prototype vs MVP: Differentiating Between the Three

There is a difference between a prototype, minimum viable product, and proof of concept. The approach is different, and so is the objective.

Here’s a chart that summarizes PoC vs MVP vs Prototype for your ease of understanding.

PoC vs MVP vs Prototype: Which one do you choose?

It is a good practice to rely on all the three strategies if you have the bandwidth, talent, and other resources to pull it off. The orchestration of PoC, MVP, and prototype saves you from the chances of product failure.

However, your business and functional requirements have an equal hand at deciding what strategy you pick when brainstorming between PoC vs MVP vs Prototype.

Here is an insight into when to use what strategy:

When to use Proof of Concept (PoC)?

When to use a Prototype?

When to Use Minimum Viable Product (MVP)?

New product development is like experimenting with a vision in mind. It requires commitment, cadence, awareness, and knowledge of how you need to move ahead with the process. The process starts with laying the foundation right, i.e., creating a proof of concept, and a prototype, followed by an MVP.

In the sections above, we have tried to erase the thin line between PoC vs MVP vs Prototype and their role in validating a product.

The combination of these strategies can help you beat the odds of product development failure!