With app prototyping tools, building a website or application becomes fundamentally easier. Businesses use prototyping to quickly validate and iterate their ideas, which in turn, helps build solutions that create a more human-centered design. However, building a product demands lots of effort, time, and money.

App prototyping tools enable clients and designers to collaborate better while being in the same context instead of having conflicting perspectives. The biggest advantage of using app prototyping tools in design process is: “the earlier we fail, the quicker we learn.”

Now, the question arises, “What are the top web and mobile app prototyping tools based on their ease-of-use and relevance?”

What is App Prototyping Tools?

Prototyping tools are tools that help accelerate the product development process by making it more effective. The app prototype is the first step to demonstrate your idea, which helps you validate your product idea. Interactive app prototypes give a thorough insight into the product design, interactions, and ideas. App prototypes help:

There are many top prototyping tools available in the market to deliver digital products. And while using UX prototyping tools, the two major stakeholders involved in it are Client and Your Team.

Remember, everyone part of the team may add value to the process. And a prototyping tool helps in real-time collaboration. Following is the trend of the most popular app prototyping tools available in the market:

InVision is a comprehensive prototyping software, which aids in the process of designing user interfaces. It has the ability to create live prototypes from static images as well as wireframes, which, when coupled with functional facilities of the software, can be transformed into the app prototype. This facilitates carrying out transitions such as buttons clicks and creating a layout as per the device interface, etc.

“InVision is indispensable, be it for quick concepting, creating a believable prototype for studies, or for building out interactive specifications.” ~ Chad Thornton, AirBnB

b) Supports cross-platform development experience. InVision enables customization of sizes and resolutions as per the design of the device. This feature is beneficial in terms of responsive design and mobile adaptations.

e) InVision provides tools that facilitate virtual communication via the project account, which is a benefit for teams working remotely.

f) Allows you to save the version history of designs, which can be referenced and compared when necessary 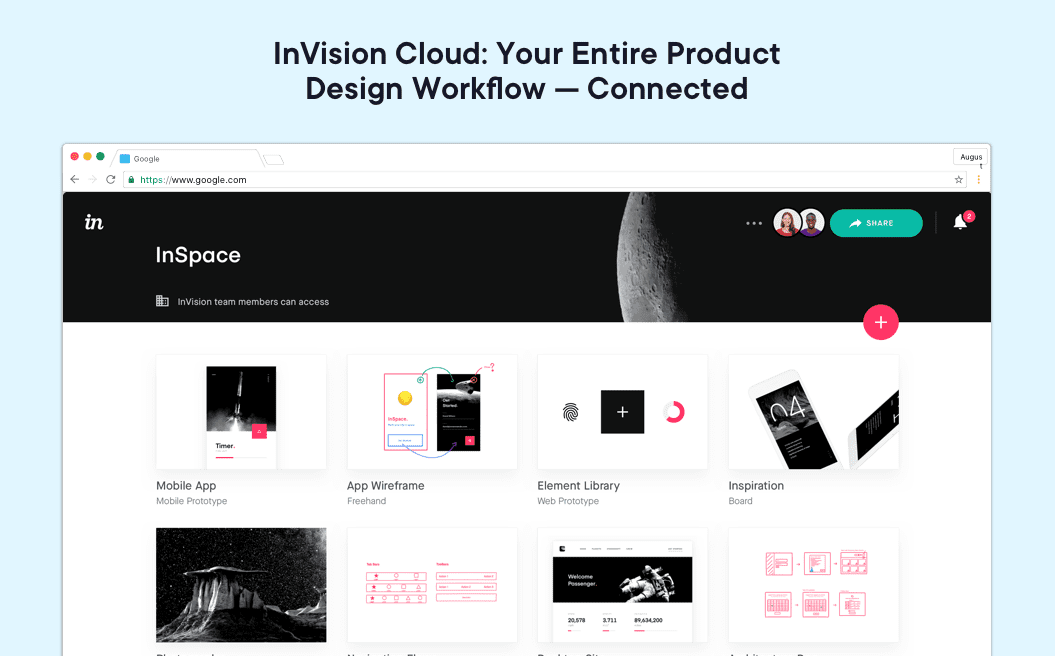 Axure RP is a wireframing and UX design tool meant for interactive prototypes. It allows users to create basic wireframes, from low to mid-fidelity. Using this UX prototyping tool, users can make portions of a screen interactive while keeping the rest the same.

It also enables users to hide or show content as per the earlier interactions. Further, the choices made by the users can also be recalled by the prototype.

“Axure allows us to test everything, even the most complex use cases. Our prototypes look and act like the real thing.” ~ Julie, Managing Director, User Experience Lab

a) In terms of widgets and design, this app prototyping tool offers basic geometric shapes, headers, texts, and form elements.

b) When it comes to interactivity and animation, Axure RP is equipped with powerful features. It supports various types of interactions such as condition interaction (for executing various operations), complex interaction (for variable functions), and gesture interaction.

c) In terms of presentation and usability testing, users can test app prototypes on their mobile devices using Axure Share.

d) An easy-to-use tool, it combines prototypes, diagrams, and specifications.

An Ed Tech Startup approached Net Solutions for a mobile app development project that would address some pertinent questions related to the education sector–aligning the right tutors for the student community and providing frictionless payment interaction between tutors and students.

The Challenge: Creating a mobile app prototype(s) that would fulfill the expectations of the tutor-student community using this app.

What was the result? Read the case study to know more.

Marvel is both a web-based and mobile app prototyping tool that can serve both novice and advanced designers, given its simple prototyping process. Its integration with Photoshop and Sketch allows easy import of screens.

“Marvel is a tool in our designers’ toolkit for them to share their work and what stage it’s in with the rest of the team.” ~ Cap Watkins, Vice President of Design, BuzzFeed

a) Allows you to easily upload your image files even via third-party sites such as Google Drive, Dropbox, and Sketch. It also supports different image types, be it PSD, JPG, and GIF.

b) With Marvel, you can edit images such as changing the background color, resizing images, etc.

d) Its mobile companion app converts sketches into app prototypes by simply capturing the image, which users can further sync with their marvel account. This allows them to build prototypes for the specific device(s).

e) Other than its easy usability, it also serves as a knowledge hub. Its community of designers shares their prototype designs for the benefit of users. Users can also benefit via blogs, tutorials, FAQs, and videos.

Adobe XD is a perfect solution for UX designers to design and build app prototypes in one go. Adobe introduced the ‘Project Comet’ in October 2015 as they felt there was a need for a new design tool. The prototyping tool took on new design philosophy, and promised the designer the ability to “design at the speed of thought”. Project Comet was renamed to Adobe XD once it came out of its beta version.

“It was the closest I’d seen to a jaw drop in a long time. Adobe XD makes it easy for the customer to get the full interactive experience without ever having to leave the application.” ~ Michael Adamson, Client Services Director at Perficient Digital

The November release of Adobe XD brings more new features than we can fit in one tweet: Coediting (beta), hover triggers, document history, component states and that's just to start! Learn more about everything new in XD: https://t.co/tpJorISXFv #AdobeMAX pic.twitter.com/wt5lnBu0Zo

b) Adobe XD’s “Repeat Grid” feature is a favorite among users for speeding up their work.

c) The designer can easily switch from design to prototype right within the app.

d) Clients can make comments on your app prototypes when you share directly, and view designs in real-time on actual devices.

Sketch is one of the most popular and efficient prototyping tools for designing websites and apps. It is one of the most used UI and UX design tools around. It’s a lightweight tool with a simple interface, leaving designers free to focus on the task at hand.

“I use Sketch for everything! From using artboards to map entire user journeys with multiple streams, to polished interfaces for digital prototypes in my client work…” ~ Alex Durussel-Baker, Designer

a) Sketch enables the user to transition seamlessly between design screens and all screen sizes (artboards), add animations, and create working prototypes with a couple of clicks.

b) Sketch’s Vector shapes have the capability to adapt easily to changing styles, sizes, and layouts, thereby allowing the user to avoid a lot of painful hand-tweaking.

d) On Dec 3, Sketch shared a little glimpse with us via Twitter showcasing upcoming features.

We've got some big plans for Sketch in 2020 😎 We're working hard on them right now and we can't wait to share more with you in the coming months. pic.twitter.com/mE24h2RULI

Mockplus is a rapid wireframing and app prototyping tool that enables designers and product teams to design, prototype, and collaborate better together. It allows users to quickly create a fully interactive website or mobile app wireframes and prototypes with simple drag-and-drop.

Furthermore, with up to 8 ways to share and test prototypes, it is super easy for them to quickly validate and iterate their ideas on real PCs, mobile phones, and tablets.

“Mockplus makes your design life much more comfortable. With Mockplus, you can collaborate with your peers in real-time. Review designs together, conduct brainstorming sessions online, and create smooth design-development handoff.” ~ Nick Babich, editor-in-chief of UX Planet

b) A full set of vivid interactions, animations, and transitions helps users create realistic and working prototypes with simple drag-and-drop.

c) With Mockplus, your entire product team can work on the same app prototype, comment and discuss ideas, and share components, masters, UI libraries, and other assets in real-time with clicks. Also, sync any prototype changes to all team members with simple clicks.

d) Users can easily choose from 8 ways to test their prototypes early on, find and resolve all potential issues before diving into the development stage.

e) It also fully integrates with Mockplus Cloud, enabling you to collaborate and handoff designs with developers, product managers, clients, and other stakeholders online within one place. 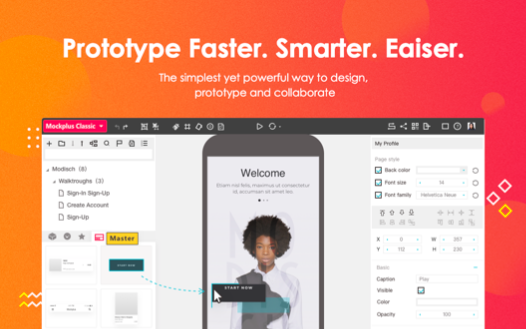 Balsamiq is a simple low-fidelity wireframing, UX design tool that allows users to visualize their ideas quickly. With many hand-writing style components pre-installed, users can easily follow their ideas to iterate designs without disturbing. This app prototyping tool is a good option for product teams to wireframe and iterate their ideas at the brainstorming or very early design stage.

a) Balsamiq allows users to sketch their ideas on a notepad or whiteboard, giving designers a unique design experience.

b) Hundreds of built-in hand-written style UI components enable users to focus on the structure and macro-level of website/app designing, avoiding wasting time in too small details.

Greatest Strength: The feel to design everything just like by hand

We have come far ahead from the time when mockups were created on paper and then shown to the clients. Today, we sit in the lap of technology that is capable of prototyping.

However, there is no perfect prototyping tool that we can tag as a ‘winner’ amongst the listed tools. As a user, you will always feel something lacking, but at the same time, you’ll admire the features of each tool. 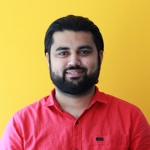 Dheeraj Khindri is a Senior UX Analyst at Net Solutions. Having started as a Business Analyst, Dheeraj moved onto User Experience (UX) Design owing to his inclination towards interactive prototyping. In addition to design, Dheeraj also enjoys poetry, writing for social causes, and exploring the worlds of politics and literature.

I think Sketch and Adobe XD are the leading tools Mobile Apps Prototyping.

what about-Sketch and Adobe XD