Swift for iOS is a powerful programming language introduced in 2014 at Apple’s Worldwide Developers Conference. Since then, Swift has been a popular programming language for iOS, iPadOS, macOS, tvOS, watchOS, tvOS, and Linux. The language works with Cocoa and Cocoa Touch Frameworks and also with existing Objective-C code for Apple products.

The best part about Swift development is the intuitiveness and the conciseness of the code that helps create fast and responsive software.

According to TOIBE, Swift ranks on the 9th position (average) for the year 2020.

Swift development enables creating anything from systems programming, iOS apps, and SaaS products that work on the cloud-based model. The objective of Swift is to help developers draft clean code with minimal antipatterns in a hassle-free manner.

Lets’ understand how iOS development with Swift is the right choice for your projects at hand.

What is Swift Development?

Swift is a fantastic way to write software, whether it’s for phones, desktops, servers, or anything else that runs code. — Swift.org

Swift became an open-source programming language in 2015. The objective was to create a sound programming language by opening the technology to all. Unlike Objective-C, it is friendly to novice programmers. It is expressive and enjoyable at the same time. Swift is compatible with devices with operating systems iOS7, OSX10.9, and higher.

The core attributes of Swift include — Safety, Fastness, and Expressiveness.

To understand its simplicity, here’s a Hello World code written in Swift:

How Swift is different from other languages:

Here are commonly asked questions and the corresponding answers, related to Swift.

1. What is the Latest Version of Swift?

2. Which Companies Use Swift?

Around 2000, companies use Swift, including big players such as Uber, Slack, Lyft, Accenture, and Firefox. These big names deploy the programming language as it enables writing gold code that is easy and quick to work with. Thus, ensuring faster time to market.

The Good, The Bad, and the Latest in Swift Development

Here an insight into the benefits of Swift development, its downsides, and what Swift’s latest version has to offer.

Swift is a widely acceptable and lovable language among the developers as it is intuitive and ensures faster development.

According to StackOverflow, 59.5% of developers are proceeding with Swift development technology and wish to continue with it in the times to come. 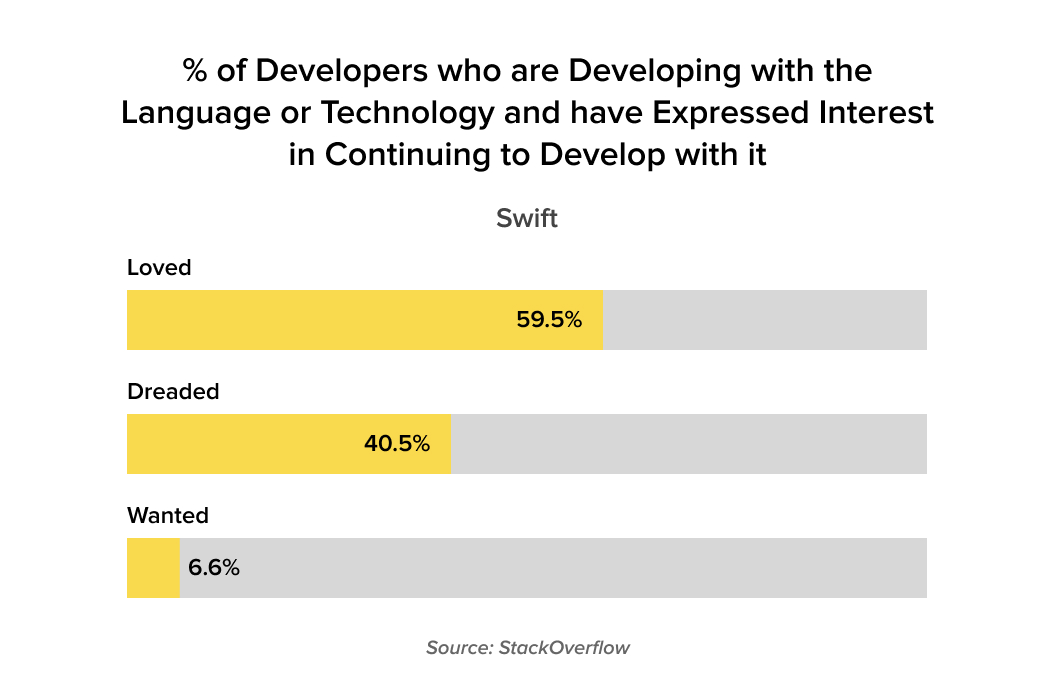 Here’s a detailed insight into why your applications should be Swift powered:

Swift is attributed as a simple, clean, and expressive language with the most uncomplicated syntax. Its virtue of being concise reduces the development time since a lesser volume of code can perform the same task as Objective-C used to perform with the lengthy code.

The Swift code focuses on reducing antipatterns in the code, which, in turn, makes it easy to test, iterate, deploy, and maintain.

Safety is the core idea behind the introduction of the language for Swift developers. The clarity of the code makes it less error-prone as a result — there are lesser code crashes as compared to Objective-C.

Swift developers can instantly see the code errors and fix them right away because of the short feedback loop. Bug fixing, thus, takes a short time and prevents the deployment of low-quality code.

Swift focuses on speed and better performance. The initial release of Swift claimed up to a 40% spike in performance compared to what Objective-C was delivering back then.

Swift development is also considered to be faster performing than its counterparts, Objective-C (2.6x) and Python (8.4x).

Swift occupies less memory space as it supports dynamic libraries. The absence of static libraries ensures that the memory is never clogged up.

Since dynamic libraries have a copy in only one file, decreased footprints benefits when you use a score of third-party code to build a Swift application.

Swift for server-end, consolidates the best of backend technologies that developers are likely to need. This is what the power of the cloud can bring to the table.

Swift gives you the power to share and reuse the code extensively for the backend as well as the frontend. The upshot of it is the – shorter development time and lesser efforts put by the Swift developer.

Since Swift turned open-source on December 3, 2015, a large and rather vibrant developer community has formed around the language. And that is what makes it easier to learn and gain expertise with the help of all-time available support.

There is a massive contribution from developers for fixing bugs, which widens the Swift development scope.

There is a co-existence of Objective-C and Swift for iOS development. There are two possibilities — you can add features with Swift to a code that has already been written in Objective-C, and vice versa.

Both can be used interchangeably in a single project. This compatibility adds a cherry on the cake for both the developers and the organizations venturing into new projects.

Swift helps its users learn the language with the help of an application called “Swift Playgrounds”. Even if one doesn’t have an in-depth knowledge of Swift, one can easily get started with Playgrounds.

Newer Swift developers use this application to assist them in writing and testing their code, without actually having to create the whole app. This not only helps shorten the learning curve but also reduces the development time. 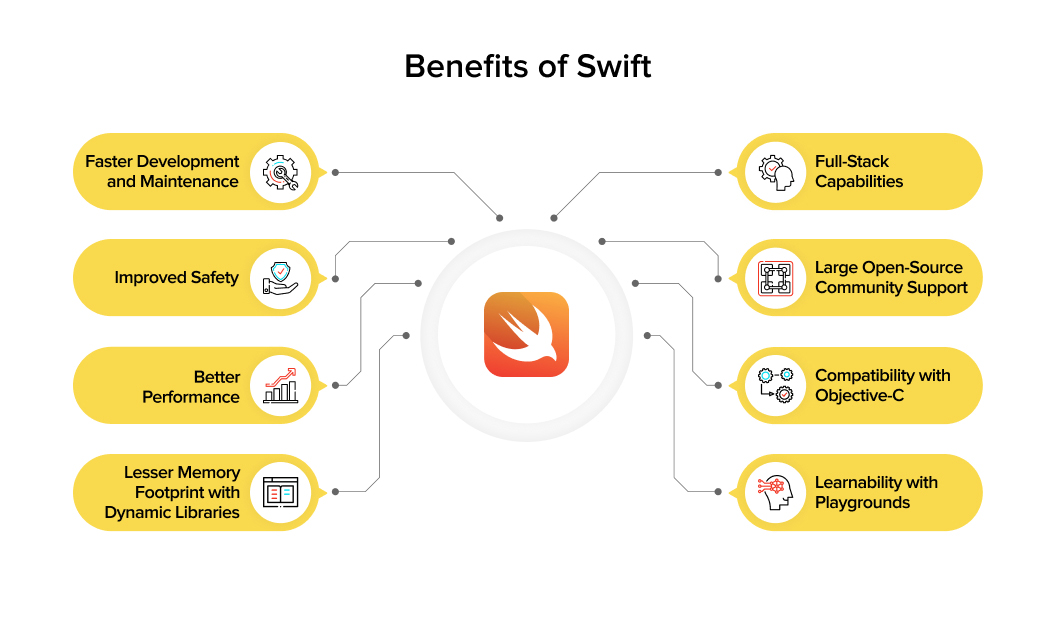 2.The Bad in Swift

Having mentioned the good, let’s discuss the disadvantages of Swift programming language.

There is no doubt that the language has been progressing full-throttle, but it is still considered to be in its budding stage, especially in comparison to Objective-C. This is why issues do crop up from time to time, which need quick resolution.

Moreover, Swift still has a minimal number of native libraries and tools. Sometimes, many of the available resources and tools dedicated to earlier Swift versions turn out to be incompatible with the newer releases.

The notable downside of Swift — it still does not support enough native libraries. Although its memory management may help developers with dynamic libraries, missing out on native libraries can be a mistake.

The same problem lies with the native tools, making it highly dependent on third-party tools, which further leads to compatibility issues.

However, the demand for Swift developers is increasing at a high pace, but the opposite is true when it comes to the availability of skilled developers. Hence, the talent gap!

4. No Backwards Compatibility for SwiftUI

SwiftUI can be deployed on iOS 13 or its succeeding versions. macOS requires 10.15 version or later, for tvOS it is 13 or later, and for watchOS, the version should be 6 and above.

This implies that Swift UI is not backward compatible as the newer features do not run smoothly with the older Swift versions.

As we mentioned before, by and large, there is an incompatibility with third-party tools because of frequent updates causing the older tool compatibility to go defunct. This makes it very difficult to find the right tools.

Xcode, Apple’s official IDE, isn’t that great when it comes to native tools and support. Apart from this, developers also face issues with compilers, syntax, highlighting, autocomplete, and even refactoring tools. 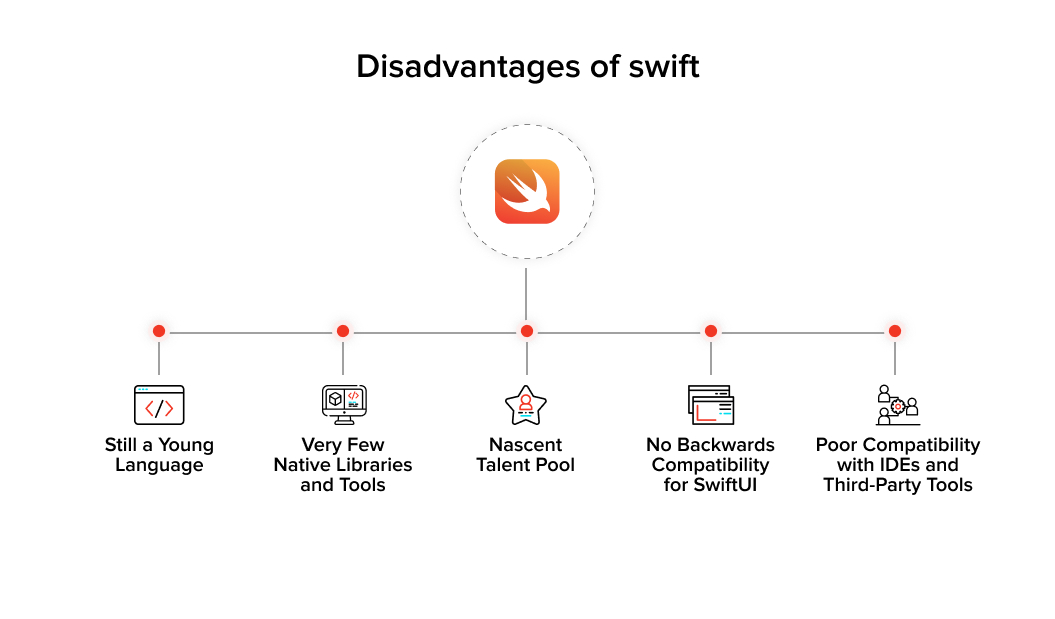 Apple released Swift 5.2 on March 24, 2020. The new features in Swift prioritize the developer’s experience by improving on:

Swift has been redefining how we develop mobile applications and software for iOS. With Swift development, ensuring faster time to market becomes easier. The best part about Swift programming language is its frequent releases that adapt well to the changing client and customer needs.

In this blog, we discussed the benefits of investing in Swift, the disadvantages of Swift, and what the newest version of Swift tries to improve. We can conclude that Swift is a promising language that has a lot to offer both for the developers and the organizations opting for it.

If iOS development is in question, Swift is the right choice to minimize the opportunity cost.

Talk to an iOS development expert for your next app