2XU: Delivering the Technical Expertise to Drive the Global Expansion of an Australian Retailer

Shortly after launch, 2XU (pronounced “two-times you”) came to dominate the Australian market for performance sportswear. And after a successful seven-year run in the domestic market, they began an ambitious international expansion. Beginning in the United States, they quickly expanded to the United Kingdom, mainland Europe, New Zealand, and Hong Kong.

At first, 2XU seemed unstoppable, but as often happens with global expansions, they experienced some significant growing pains—none of which were made easier by the changing digital landscape. Given the growth in online shopping, especially via mobile devices, executives at 2XU knew they had to address these challenges if they wanted to experience continued success.

Despite their success, 2XU faced the following challenges.

Lack of Mobile-optimization: The mobile shopping trend was sweeping the world, and 2XU’s customers were no exception. With mobile traffic increasing steadily, management was rightly concerned. After all, their websites were not designed to handle mobile traffic or mobile transactions.

Dated Design: 2XU had been in business for more than a decade at this point, and their web design was dated. They needed an update to remain relevant.

Bloated and Heavy Websites: The old backend technology had begun to take its toll, making the websites slow and difficult to use. This can lead to frustrated customers and lost revenue.

Simply creating one site and copying it for each location would have increased the risk of installation fragmentations, making site maintenance difficult in the long-run and costing 2XU greatly in the years to come.

Partnership Integration: In some geographies, 2XU had partners representing them, and each partner required their own workflows, specific access levels, and other customizations that the current system could not support. 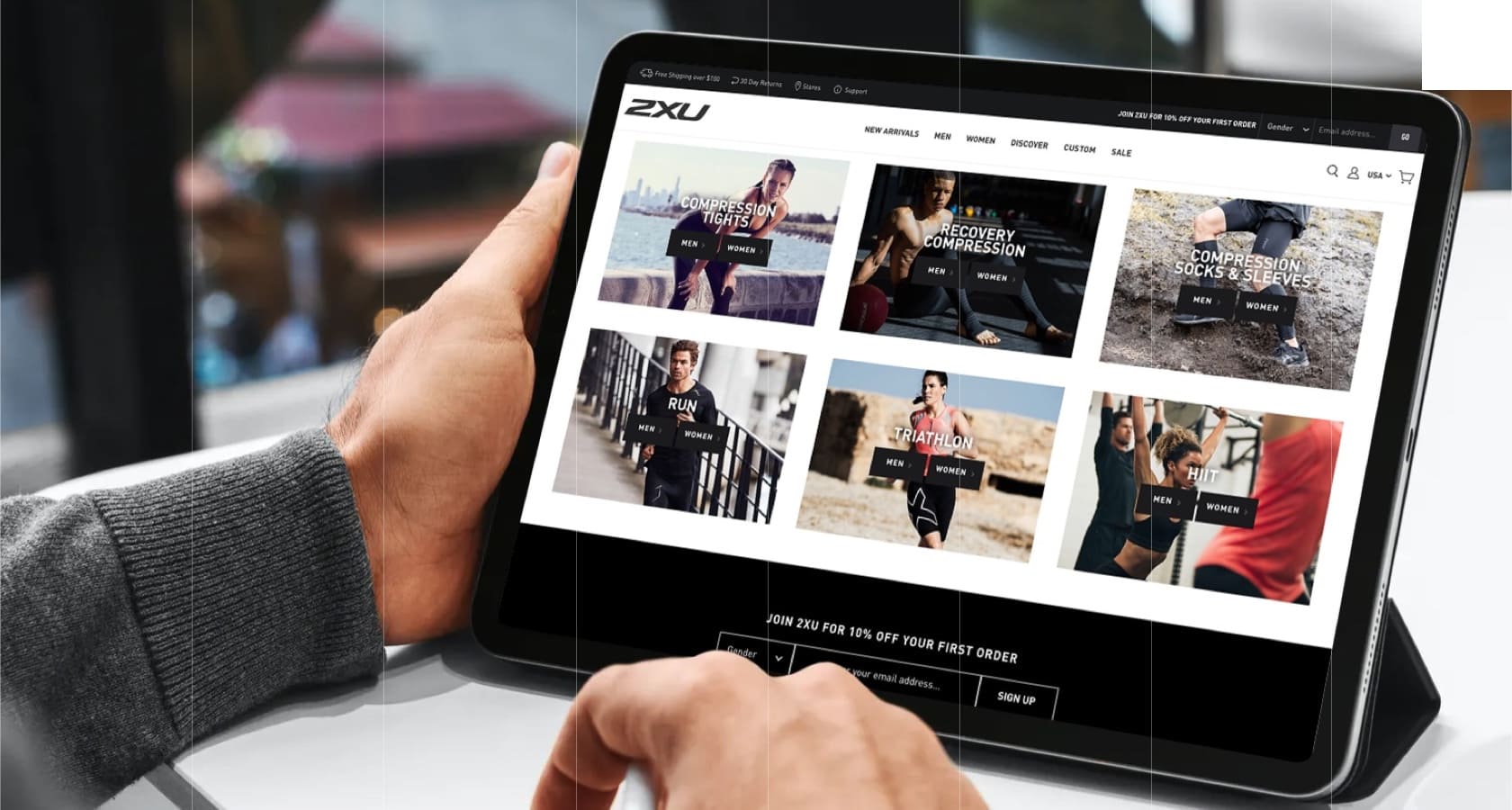 2XU knew they needed expert tech partners who had dealt with international expansion before, and they brought a number of consultants to guide them. 2XU approached Net Solutions based on a strong recommendation, and they signed with them after a full vetting process.

Given the challenges ahead, Net Solutions worked with the 2XU team to prioritize the various elements of the website overhaul. With this in mind, Net Solutions took the following approach.

The most pressing task was to make the website responsive and correct the problems that were impacting their bottom line.

Net Solutions flushed the existing Magento of all the “grime” it had picked up over the years, enabling the new design to load quickly. They placed special emphasis on the mobile interfaces to increase the user experience manifold.

The next step was to configure the backend to run multiple websites, with the main sites separated out from the installations for partners in select geographies. Net Solutions then tied everything together in the backend to present a complete picture to the administrators and business teams, enabling them to collect comprehensive business intelligence.

2XU chose AP21 (now called Apparel21) and Hubsoft for inventory and order integration. While a capable solution in itself, it did not provide the level of integration 2XU needed in terms of data flow, especially as they expanded.

Net Solutions worked directly with the vendor’s API to create a custom-fit integration solution. This had the added advantage that since it integrated directly into Magento, they could mold it to conform to the processes and systems already in use at 2XU. This meant the new system could handle things like multiple timezones, function at extremely high speeds, and even enable real-time two-way sync.

Working in unison with the e-commerce and marketing teams, the Net Solutions team quickly optimized the marketing workflows, implementing both global-level funnels as well as geography-focused optimization received from local partners.

These changes showed immediate results, and it meant working with and providing fast support to the global offices, from Australia to the United States. In fact, it quite literally stretched across every timezone in the world, with 2XU teams working around-the-clock in different locations.

Within a year of the engagement’s start date, Net Solutions helped 2XU reimagine and reposition their e-commerce platform to perform across a global marketplace.

The new system was optimized for:

Net Solutions achieved all this by keeping a close eye on 2XU’s business goals, maintaining a unified view of its operations and the path forward.

Ready to Expand Your
E-commerce Business?