Businesses have the experience to build, deploy, and maintain web and desktop applications. Also, they have designed models to determine their cost. However, mobile apps are different, and these traditional models won’t work to determine the cost to build an app.

Mobile is becoming not only the new digital hub but also the bridge to the physical world. That’s why mobile will affect more than just your digital operations — it will transform your entire business. – Thomas Husson, Vice President, and Principal Analyst at Forrester Research

Mobile apps, thus, continue to be a critical priority for organizations to attract, engage, and delight target customer. Tweet This

How Much Does it Cost to Build an App?

According to Statista, there were close to 204 BILLION mobile app downloads last year.

The number is not so startling when you consider the extent to which smartphones have penetrated our day-to-day lives – users spend an average of three hours and 15 minutes on their phones every day, with the top 20% of smartphone users spending upwards of four and a half hours. This mobile app development trend shows no signs of slowing down, and if you want to take your business to the next level, a mobile app is your pass to the fast lane.

The cost of developing a mobile app depends upon several factors:

In a competitive era where we embrace a plethora of mobile applications daily, the importance of having a business model is vital for mobile app development, which eventually plays a key role in determining the cost to build an app. Before initiating the process to estimate the average cost of building an app, you must first analyze where it will fit into your overall business model.

So, what exactly is a Business model?

Simply put, it is an assortment of factors that include determining the target audience and their pain points, offering better solutions, making it a direct source of revenue through sales, etc. and most importantly knowing that your customer is the most important factor in your business model hence prioritizing their demands.

eBay, for instance, failed considerably in winning the trust of its customers as it compromised quality over the quantity. It also was unable to capture the market while Walmart and Amazon gained huge acceptance by coming up with exclusive launches. Failing to understand its customer base, eBay has lost its market share over the years.

All the business model factors combine to directly weigh into the total cost of the mobile app development project and drive the type of app you intend to build. Note that the difference between the market takers and market makers isn’t product innovation, it’s business model innovation.

Having a great idea for a product or service is one thing, and making it accessible to mobile users is another task.

After building a robust business model, you will come across various technologies that your mobile app development team will have to research on for the project. Next, your project manager and the app development partner will have to choose the right application carefully since it will have a significant impact on the overall cost to build an app. Based upon the complexity level, an app can be categorized as follows:

Not technically a mobile app, it is instead a mobile version of a website. Based upon the principle of ‘mobile-friendliness’, it uses responsive design to ensure a smooth user interface across varied screen sizes – from tablets to smartphones. Because of the limited features and lower performance as compared to native apps, 85% of smartphone users prefer apps over mobile websites. This is by far the cheapest and least complex of all the options.

There are several applications that aim to hit a perfect balance of good user experience and performance, and are built with language native to the operating system of a given device like iOS, Android, Windows – Swift or Objective C for iOS platform and Java or Kotlin for Android platform. Native apps are most complex of all, but as the app is built and optimized for a specific platform, it results in a high level of performance. Hence, native apps also turn out to be expensive.

Built using the combination of web and native technologies, this approach is best suited to cater to the needs of a large audience. Development and maintenance cost is low as compared to other approaches but they are not considered best in terms of capabilities because of limited access to smartphone hardware as compared to native apps. They can smoothly run on all OS like iOS, Android, Windows.

To help you in this decision-making process and understanding how much does it cost to make an app, here’s a list of comparisons between Web vs. Native vs. Hybrid mobile application developments:

To build a mobile app, it is important to follow a Stair-Step Approach – where a long successful journey begins with a single and simpler step. No doubt, the ideal approach seems to build an app for both the platforms at the same time, however, that turns out to be an expensive and risky approach. For instance, Instagram, first launched on iOS in 2010, became available for Android users only four years later i.e., in 2014.

To build a mobile app, it is important to follow a Stair-Step Approach - where a long successful journey begins with a single and simpler step. Tweet This

So the question that arises at this point is – Which platform to choose? The answer to this question lies in the following iOS and Android comparison:

Back in the year 2012, iOS would seem to outsmart Android in the worldwide mobile share market with a share of 61%. However, the situation has changed considerably, and by 2022 Android is likely to own 86.2% of the world’s mobile market, which is approximately 6 times higher than iOS (13.8%).

Having 3 potential users instead of 1 is definitely a significant difference to consider while opting for a platform to build your own app. 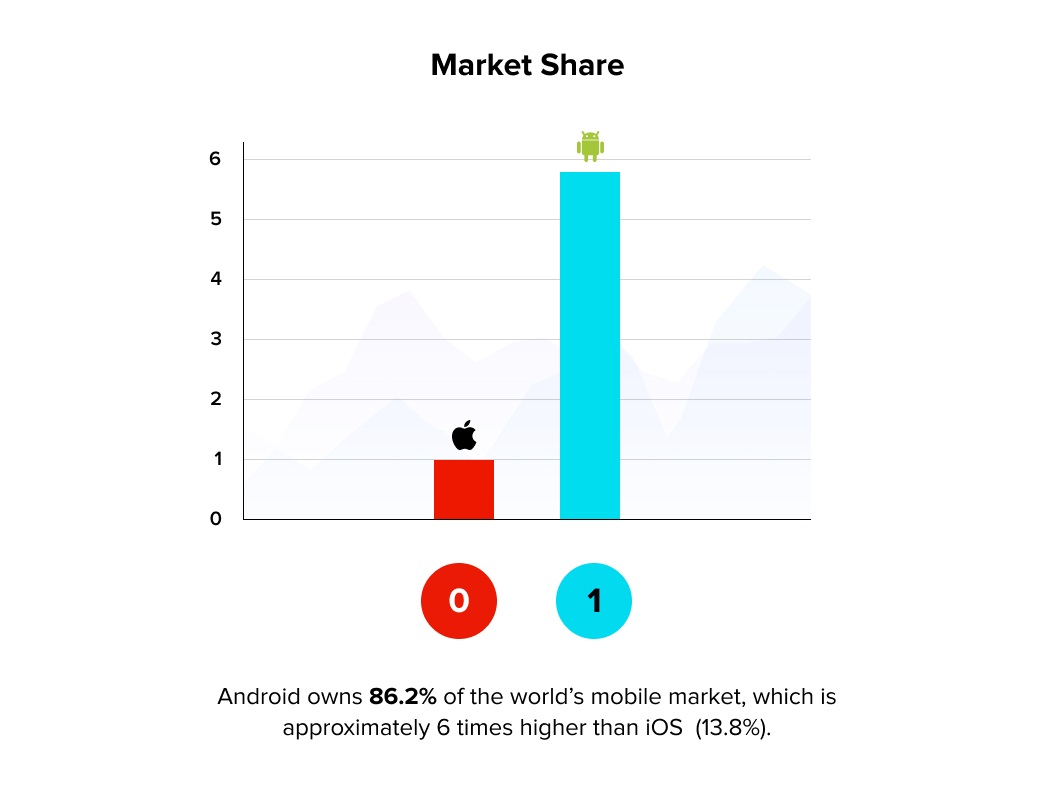 The issue of fragmentation plays a vital role while considering which platform to go ahead with. On one hand, Apple has a limited number of devices that run on iOS (iPhone, iPad, and iPod) that are mostly updated to the latest version (iOS 11) of the operating system. On the other hand, there are a plethora of smartphones and tablets that run on Android with varied screen sizes and aspect ratios. It means that your app should be suitable for all of them. Moreover, in the Android platform, you can’t find any operating system which is used by more than 50% of Android device owners. 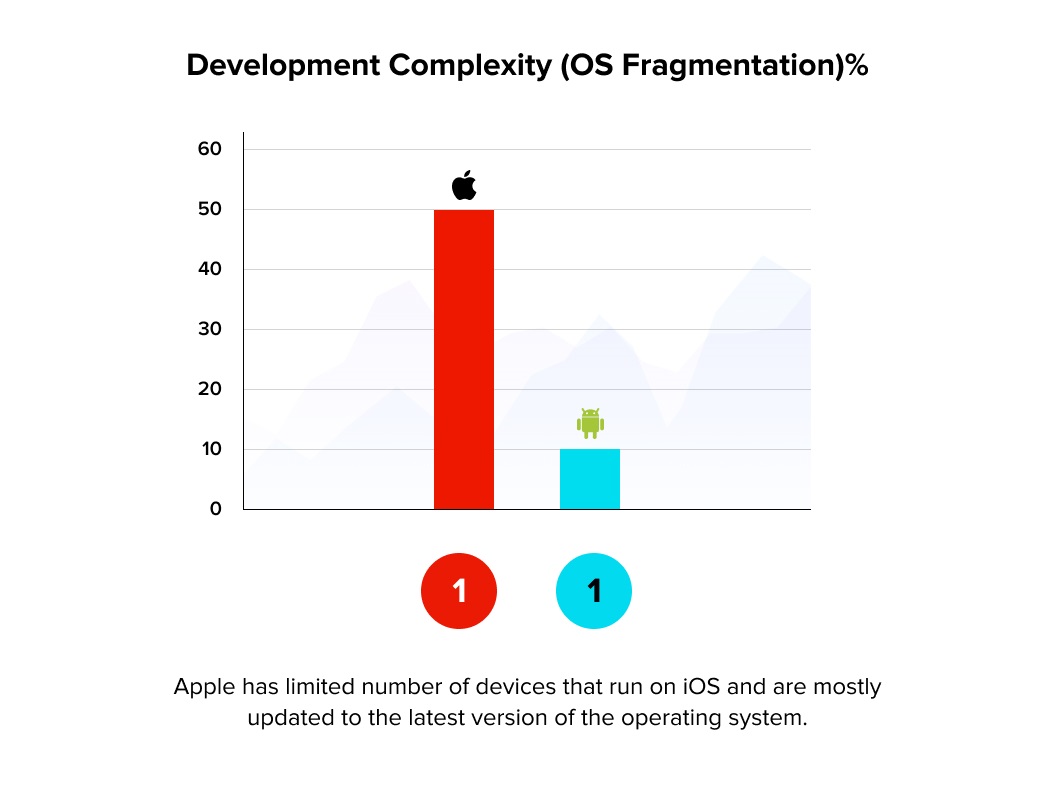 It can be inferred that iOS apps are faster and cheaper to design. However, after the completion of your app, when it is ready to hit the market users across the world, one crucial step to pass is publishing the app to the app store, which adds on a little to the cost to build an app.

Google Play Store charges a one-off $25 payment to upload your app without a long and strict approval process. Additionally, Google Play Store takes a cut of 30% of purchases made through the app, once it’s available.

On the other hand, your app undergoes a rigorous approval process in the Apple App Store that charges a $99 annual fee. You also incur on a 30% cut regarding purchases made through the apps. Hence, Android is an evident winner when it comes to the publishing process. 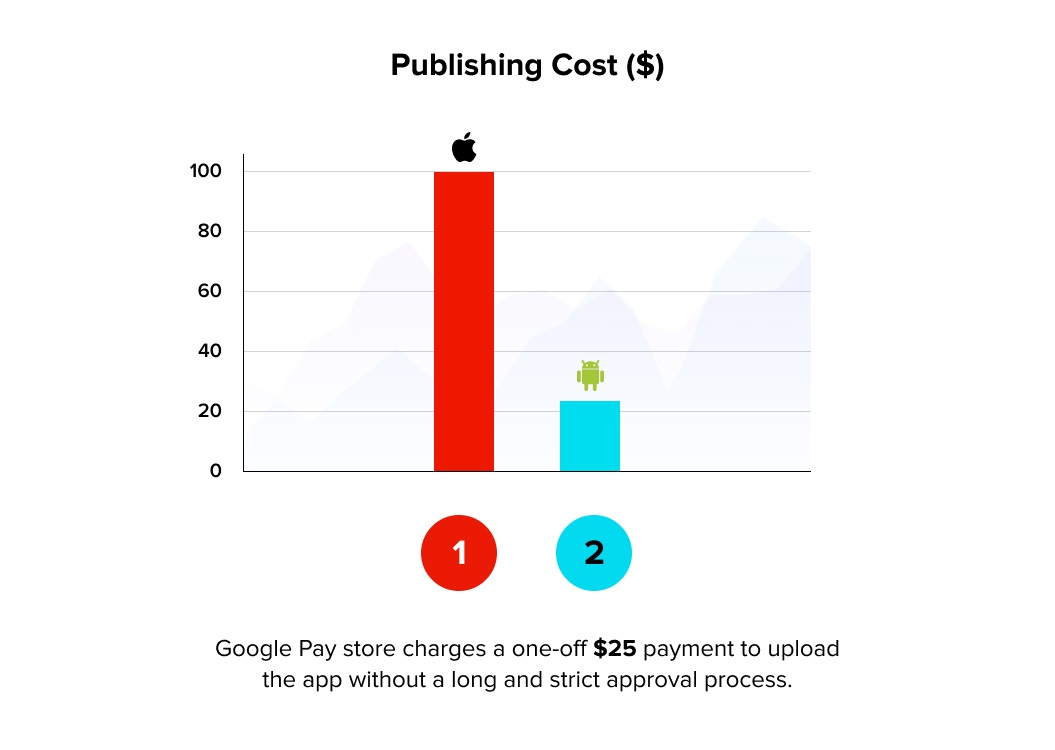 It can be easily concluded after reading the above passages that iOS apps can be built faster than Android apps. When compared to Android, iOS development is about 40% faster. And the reason is once again fragmentation. Hence, the average cost to build an iOS app is less than cost to create an Android app.

In the end, mobile apps are a business. So, the decision to choose a platform boils down to the primary function of your app and the intended target audience. To succeed, you’ve got to have a strong marketing strategy as the first parameter. 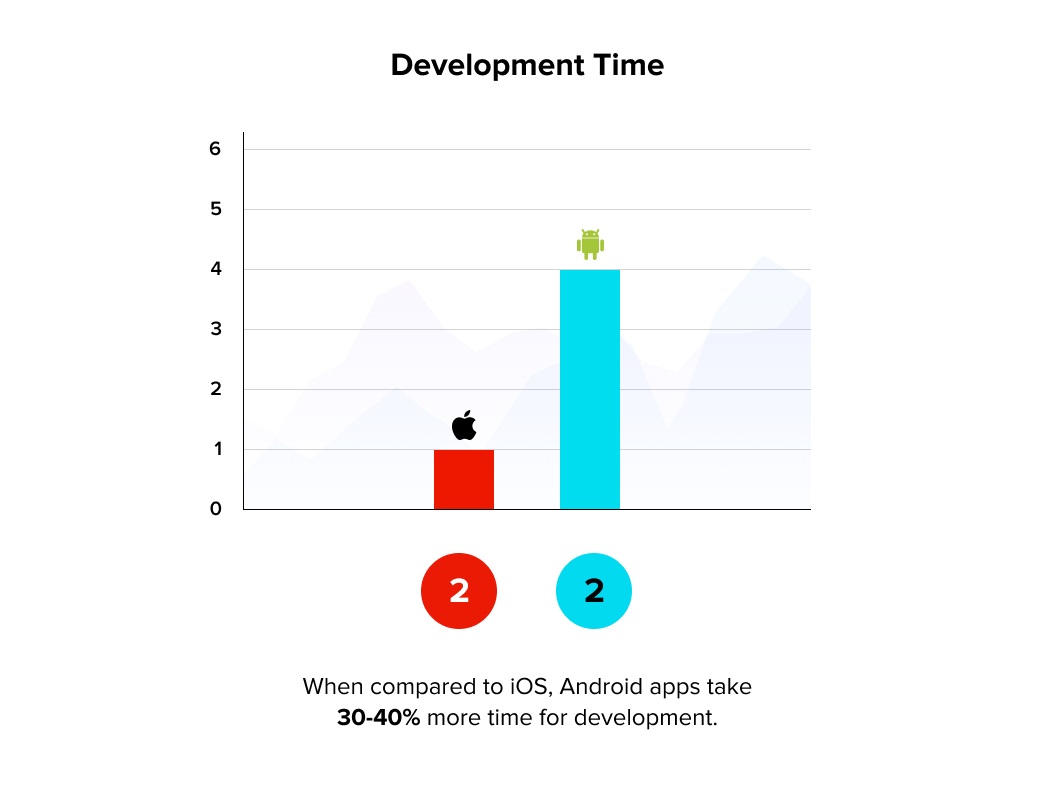 Estimating the cost of creating an app is a lot like planning a home. The base price for the type of app you intend to build keeps on increasing with the addition of new features. With mobile apps becoming more and more advanced, there is virtually no limit to what an app can do. Hence, there is no definite figure to the cost; it may range anywhere between a few hundred dollars to a few million.

Estimating The Cost of Some Core Features

It is indispensable to have a thorough understanding of the basics of the app development, the features that can be added, and the technologies that back them while building your estimate. Taking base hour price as $25 and maximum hour price as $50, let’s have a brief rundown of how much does it cost to create an app depending upon the types of features that make up a typical mobile app:

Further Properties To Factor In

This is just a break-up of some of the common features that combine to build everyday mobile apps. Of course, there are other factors that affect the complexity and cost of building an app. Here are some of them:

We have discussed various factors that are vital determinants of the app-building cost. However, another factor that plays a major role in determining the cost to build an app is – who you hire!

While the option of hiring freelancers and newbies seems a feasible and economical option, it may cost you more in the long run. You can find a lot of freelancers out there; however, there can be a big question mark on their skill-set and consistency.

“If you think it’s expensive to hire a professional to do the job, wait until you hire an amateur.” – Red Adair

On the other hand, big companies with experienced developers charge more than freelancers. They bring on the table their experience and guarantee, which is important for a successful mobile app. Such companies are equipped to address all your needs related to the mobile app. At the same time, they’re able to thoroughly get acquainted with the business model.

For instance, one of our clients IsaiX, approached Net Solutions to redo their flagship web-based product, Coach Technology®. We promised our client to finish the job within six months. We followed the Agile development methodology to speed up the process and delivered the product in less than six months as committed.

Hence, hiring an experienced mobile app development company costs you more than other options, but the project gets delivered on time with consistency and skillfulness. 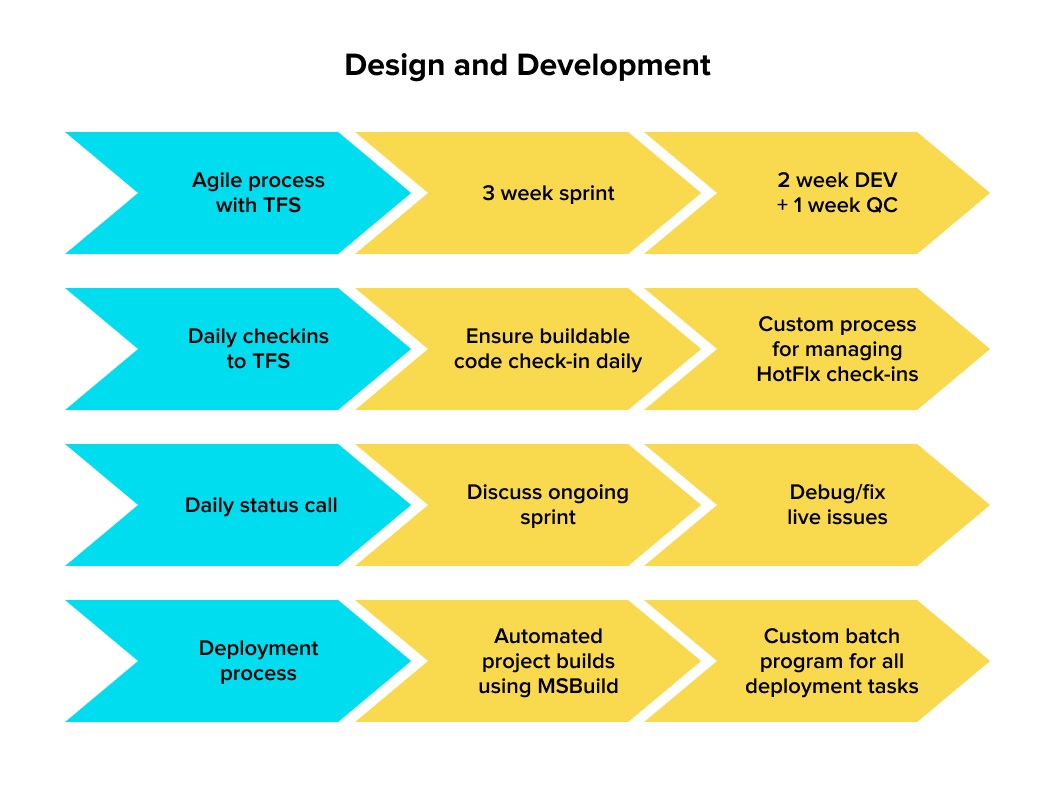 A survey by Clutch on the number of hours required for mobile app development activities revealed that the high median cost to build an app is $171,450, with an extensive range from under $30K to over $700K. Evaluating this cost to develop an app is essential since it has a subsequent impact on the overall business.

We discussed five essential aspects of app development in the post. They are business model, app types, platform, functionality, and development . You should now be well-equipped to prepare a robust and high-quality app that will fit within your projected costs.

Hire experts to build an app for your business.

Abhi Garg is the Chief Revenue Officer (CRO) at Net Solutions. Uniquely placed at the intersection of Product Development, Engineering, Innovation, and Sales and Marketing initiatives, the prospect of solving complex problems by leveraging technology motivates and excites him. He draws inspiration from the rewarding experience that follows while going through the trenches in an attempt to bring positive change in the lives of individuals and efficiency in business processes.

Great article with rich content, easily readable and accessibly explained. Very transparent too which is refreshing.

the popularity of the application is influenced by their downloads. everyone today has more than 30 smartphones and some have more than 100