Nigeria is Africa’s largest economy, and during the previous decade, the country expanded its GDP considerably—creating new opportunities for growing businesses like Konga.com. A true innovator, Konga sold products in all categories, used their own logistics company for delivery, and had developed their own payment system.

Headquartered in the bustling metropolis of Lagos, the most populous city on the continent, Konga’s leadership wanted to expand from serving the city itself to reaching the entire nation. At this point, they had always relied on their website as their e-commerce channel, and to reach a wider customer base, they wanted to expand into mobile platforms. This would enable users across Nigeria to access the website through mobile apps, ensuring the broadest expansion possible.

Konga had a highly capable team of software engineers on staff, but they had no mobile developers on staff—and it took specialists who understood mobile app development to not only build a quality app, but to create one in the face of these challenges. That’s when Konga executives began their search for an outside development team.

A Whole Host of Challenges

To keep up with the competition and maintain their position of dominance, Konga needed to address the following technological challenges as they focused on mobile expansion.

Device Fragmentation: Nigeria’s population has a range of access to technology, from simple Android devices to the latest Apple and Android smartphones. Whatever mobile platform they created it would need to work on all these devices, which was no easy task.

Bandwidth Variation: Bandwidth wasn’t very reliable in Nigeria, so developers had to create apps that worked well in low-bandwidth conditions.

Mobile App Integration: Konga ran on Magento, one of the most popular e-commerce platforms in the world. Today, Magenta supports mobile apps, but at the time it did not support mobile app integration.

Konga management wanted to expand their e-commerce ecosystem by creating a mobile app that both worked flawlessly and maintained parity with upcoming features they hoped to add to the desktop site. 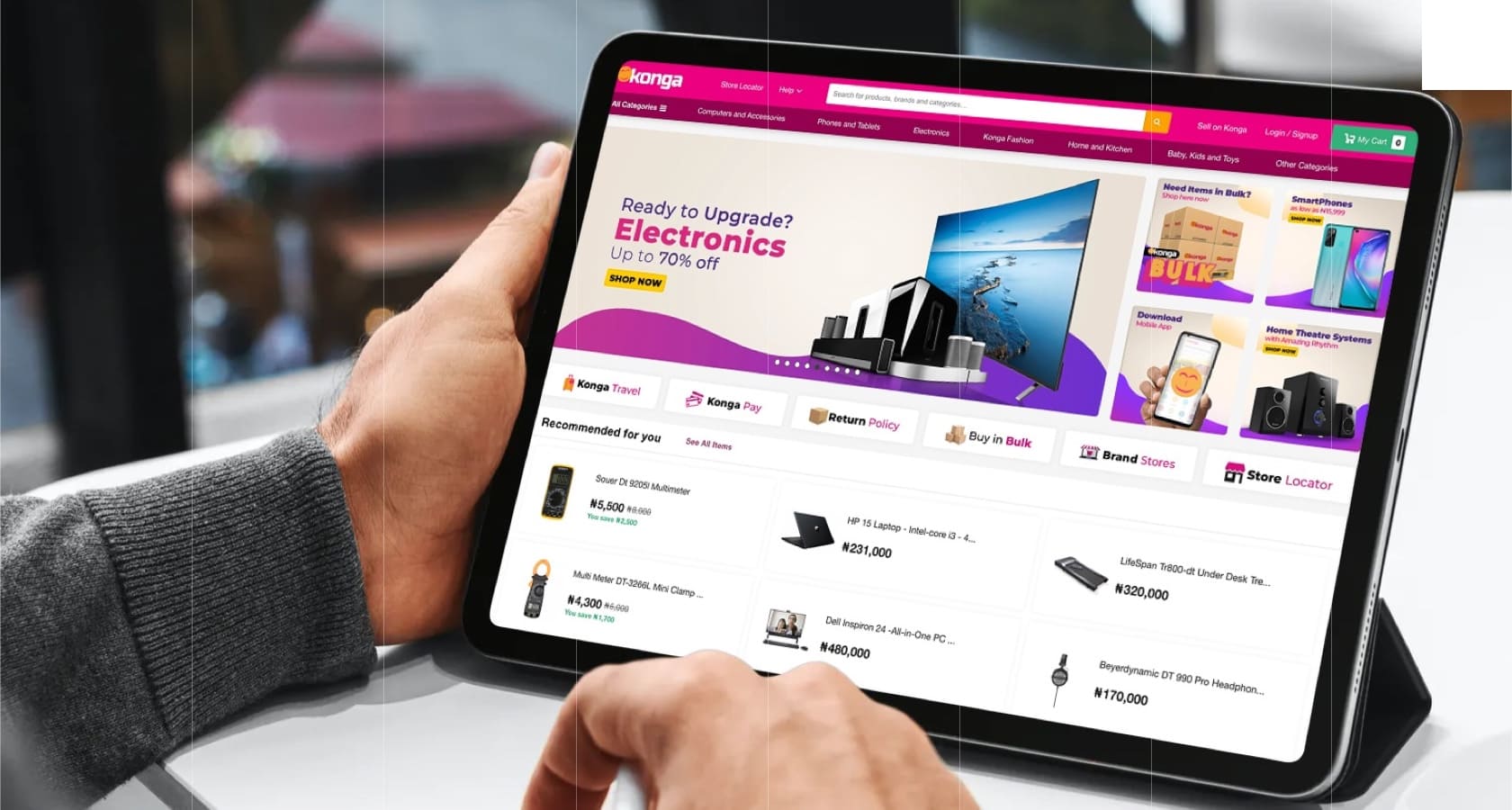 The outsourced mobile team would also have to figure out how to tie the mobile apps with Konga’s Magento back-end while addressing the wide variety of Android phones prevalent in Nigeria (i.e., the device fragmentation issue mentioned above).

That is when they found Net Solutions. Net Solutions had the perfect set of skills for the project, including:

Android was the dominant mobile platform in Nigeria, so Konga leaders chose to focus their efforts on the Android app to reach the largest possible mobile audience. Given Net Solutions’ vast experience with Android development, along with all their other qualifications, they seemed like a natural fit.

Building and Integrating the Android App into the Konga Ecosystem

The team at Net Solutions attacked the problem with a two-pronged strategy:

Challenges along the Way

Konga and Net Solutions were now in uncharted territory, and the path ahead wasn’t always easy. They encountered, and eventually overcame, the following challenges:

API Health: The Konga development team was engaged in active back-end development, and sometimes these changes would break the APIs. As such, Net Solutions’ engineers had to keep a close eye on API health. After all, a dysfunctional API would break the mobile apps. Through painstaking attention to detail, however, they built an app that could handle a less-than-functional API, and do so gracefully!

Payment Gateway Issues: Konga used a payment gateway that did not directly support the mobile app, and there was no SDK available with the integration.

The solution? Net Solutions’ mobile app developers reached out to their colleagues who handled Magento's development, and they worked with them to figure out a path where the integration would be routed through the back-end.

Product Update Fluctuations: The site was updated daily with products and associated categories subject to change depending on market forces. Given these fluctuations, the mobile development team realized they could not use a standard approach where details like this would be embedded in the framework of the app.

Instead, Net Solutions created an API interface that allowed the entire store that appeared on the mobile apps to populate dynamically. As a result, if a particular category were added or removed on the website, the changes would become immediately visible on the mobile app as well.

Mobile Device Variation: As mentioned above, Nigerians have a wide range of mobile devices, which meant that Net Solutions had to optimize the app for phones with different screen sizes, resolutions, and bandwidth capabilities.

The app needed to work properly across a range of phones, of different sizes, on unreliable bandwidth. To make this possible, Net Solutions carefully designed the User Interface (UI) and workflows. They optimized the User Experience (UX) by embedding some assets within the app while loading some dynamically from the back-end. This allowed the app to work, feel fast, and respond as though it were designed for the individual user's phone.

The app quickly became one of the most downloaded Android apps after its launch on the Google App Store, with more than a 4-star average rating.

Midway into the Android app development, Konga was certain they found the right partner in Net Solutions. Convinced the larger challenge of creating an Android app that would work across the range of devices was behind them, Konga management green-lighted the iOS app development and forged ahead.

The Net Solutions team quickly implemented the iOS app using all they’d learned from developing the Android app—extending the design and features to the new platform. 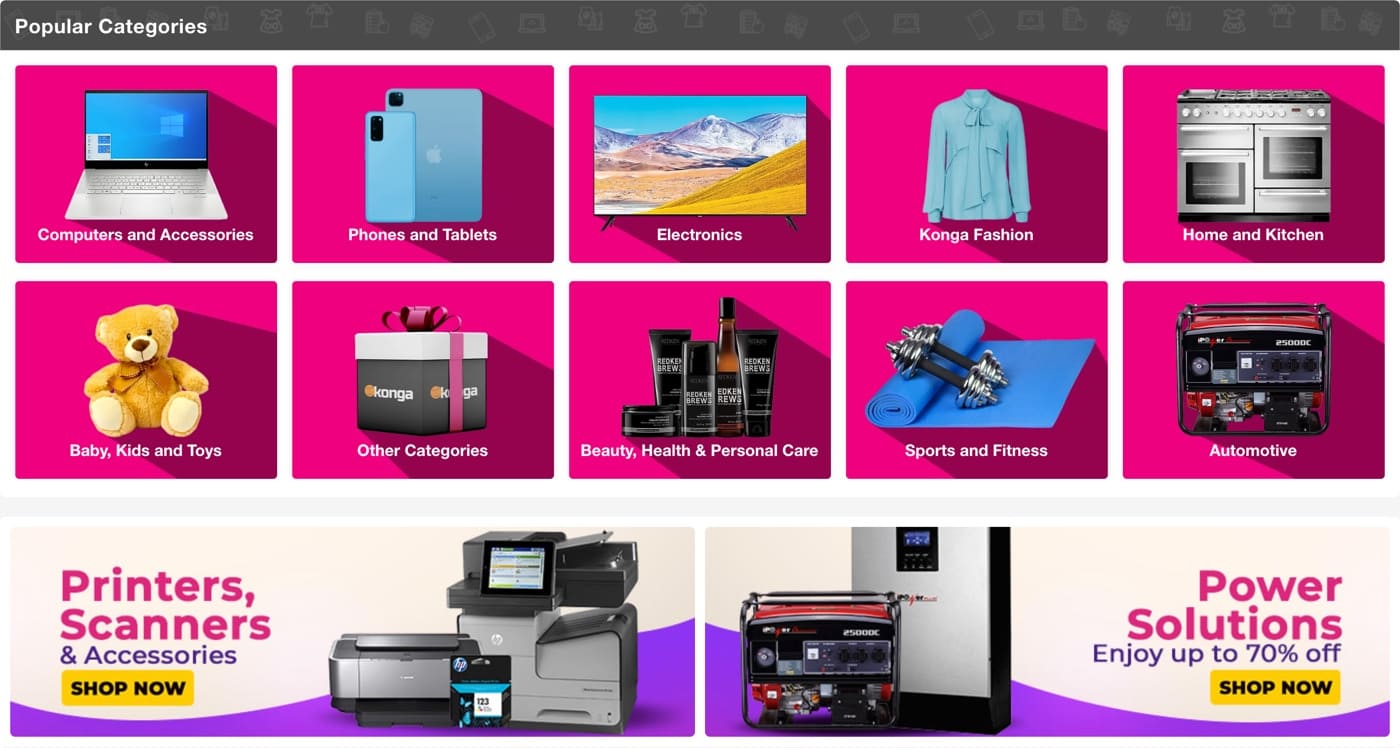 Expanding the App’s Features and Broadening the Konga Ecosystem

As Konga continued to add new features to the website, the two apps were updated to match those features, which included the following.

Custom Timers for Special Deals: Admins could create discounts on individual products or entire product categories. Each deal featured its own custom timer, counting down the days, hours, minutes, and seconds left before the deal expired. The solutions ensured that these times worked flawlessly on both mobile apps.

Support for Unlimited Product Variation: Net Solutions enabled the apps to support unlimited product variations. That way, if (and only if) a given variation were in stock, the system would show it as available. This allowed the administrator to configure the product however they saw fit, remaining confident that the mobile apps would display the correct information.

Custom Notifications: Since Magento did not support notifications on mobile apps, Net Solutions extended the APIs to trigger notification events on the apps. This meant that users could be notified for events like expiring deals, product shipment, etc.

Seamless Handover: All activity on the mobile apps was synced to the website (and vice versa). That meant that everything from wish lists to shopping carts would sync perfectly between the website and the mobile app, allowing users to do something like browse products and fill their cart on the app, then switch to the website to place their order.

The Net Solutions team also supported the Konga team when it came to building features that Magento didn’t yet offer. For example, Konga wanted featured categories and featured products. Since there was no native tool on Magento that provided this solution, Net Solutions created a custom module for the Magento platform and made it work for both the website and the mobile apps.

Over the course of their relationship, Net Solutions helped Konga use mobile apps to dominate the e-commerce market in Nigeria. The mobile apps also won awards for Konga, including the Fast Company Online Retailer of the Year Award and awards from Market World.

As part of their overall strategy, Konga extended their Development Center to support their mobile apps, and they relied on Net Solutions to pass the baton. Net Solutions oversaw a proper, documented handover, supporting Konga’s internal team until they were 100% comfortable managing their own mobile apps.

Ready to Optimize your E-commerce
Ecosystem?