When Net Solutions first began working with IMG Licensing, the company was already a leader in sports and event management—staging hundreds of live events and branded entertainment experiences every year, throughout the world. Eventually, WME acquired IMG and the two corporations formed a new business entity known as Endeavor—which remains a leader in the field.

The English Premier League (EPL), a top-level UK football league, was one of those high-profile organizations that IMG managed. And IMG wanted to keep executives at EPL engaged in the content they produced.

To this end, IMG had created a desktop application that enabled a tie-up with Livestream. EPL execs with access to the platform could stream and watch the EPL events as they happened live.

The problem? The platform only showed event streams in real-time. There was no way to watch or rewatch content that had already aired, and users couldn’t view any specialty content produced by IMG.

IMG wanted to give select EPL execs access to their content schedule. Further, they hoped to enable active communication through the app between relevant EPL stakeholders, especially when it related to streamed and produced content.

Lastly, since mobile phones and tablets were becoming more common, many EPL executives did not want to be limited to their desktops to browse content. In fact, many preferred a mobile app.

Rather than upgrading the platform, IMG looked into creating an entirely new platform based on the existing one. If this solution proved viable, they would be able to implement all the changes they wanted in one fell swoop.

IMG imagined a platform that allowed users to:

The new app, they decided, would work on both the iPad and the web for desktop access. They also chose to distribute iPads to EPL executives as part of the program. 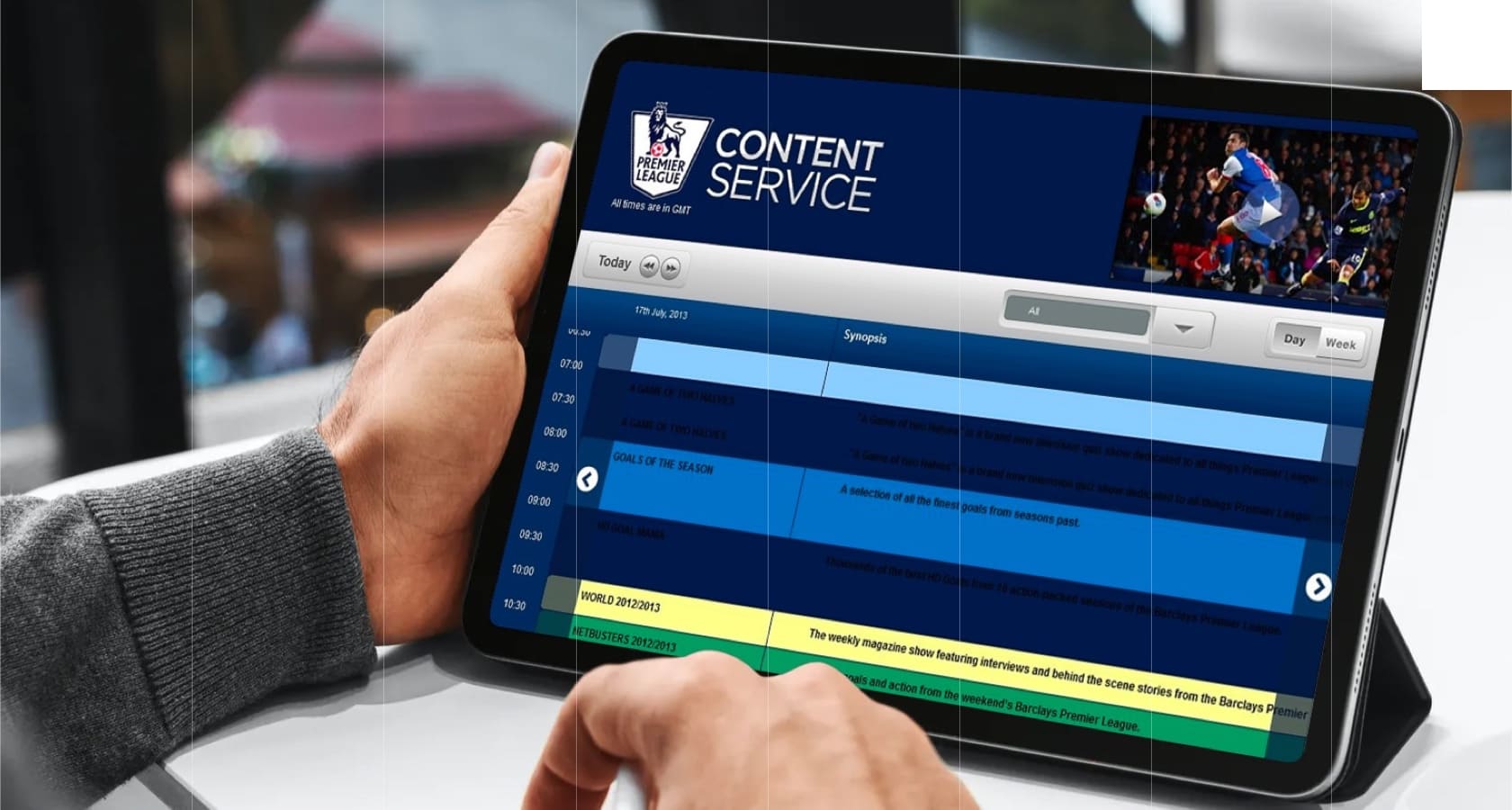 Jaspinder Singh, the Software Development Manager at IMG, had worked with Net Solutions for nearly five years. Happy with Net Solutions’ strategic approach, communication, cost, and reliability, he felt confident they could deliver a mobile app—even when up against a tight deadline. After all, the new football season was just around the corner.

Net Solutions assured Jaspinder they could meet the deadline. Since their competitive pricing worked for him, the Business Analysis (BA) team began researching solutions.

Could the New App Livestream Events on an iPad?

The BA team worked to identify the challenges ahead, documenting the existing web platform’s specifications and assessing what it would take to create a brand new platform.

Among those challenges were the facts that:

This meant Net Solutions could not create the iPad application natively, and they had to find an entirely different solution.

The answer? Net Solutions’ team found that a PhoneGap-based implementation actually would work on the iPad, so they decided to build the app using PhoneGap/Cordova.

As always, your team did a very good job, and business users were really impressed with the quality of the work.

Displaying Program Schedules through the App

Net Solutions built a system that exported the program to an XML file. The plan for the new system was to automate its upload to a specific location whenever the schedule changed.

To check whether the file had been modified and import its contents into the database, Net Solutions created a Windows service that monitored the file. With every update, the newly modified data was imported into the SQL Server database that would power both the web platform and the iPad application.

Once the application was live, EPL wanted to roll out access to the platform and the streaming app to a larger set of executives. Since the content was not originally intended to be available broadly, Net Solutions created a category-based access control system that gave admins the ability to override access restrictions for individuals. This would allow the content administrator to specify who had access to what content.

The schedule itself was displayed interactively on the interface. In other words, it would show a user the upcoming week’s schedule by default, but they could then change the date granularity (shifting from days to weeks to months) whenever they wanted. They could also filter content, displaying only the information they wanted to see.

Finally, both the apps loaded on the iPad and the web-based platform authenticated with an actively synced user authentication system, ensuring only the right people had access to the exclusive content.

Now that content administrators could access Video on Demand, upload videos, and send messages to specific categories of users, IMG could engage EPL executives in new and exciting ways.

The following year, based on Voice-of-the-Consumer Data, the Net Solutions team enhanced both platforms in both subtle and not-so-subtle ways. Among those major changes? The next version included 16:9 video support by default.

EPL greatly appreciated the upgraded web platform and the new iPad app. Both received positive feedback from new users along with seasoned users who were intimately familiar with the original.

Net Solutions provided excellent support in the areas of website engineering and site optimization. I can confidently recommend Net Solutions as a dedicated and reliable supplier and experts in their field.

Want to Wow Your Customers
with an Innovative App?