iOS Development Tutorial: Learn How to Develop an iOS App

Summary: Learn how to develop an iOS app from scratch with Xcode, Swift, and React. Let’s run through the basics of designing a user interface and coding your first app with this iOS development tutorial.

How to Develop an iOS App?

With an idea for an iOS mobile app in mind, the next step is development. While learning how to become an iOS developer is one option, there are actually three options for bringing an iOS app to life:

Using no-code app builders such as AppyPie can get an idea into the Apple Store quickly even for enthusiasts without coding knowledge, but often with sub-par results.

If you are looking to make an iOS app solo, or are looking for information on how to develop iOS apps to become a competitive software developer, you can take weeks or months to become proficient enough to begin an app. However, the iOS development learning curve can take time – time that can hold back an idea from being developed quickly and with best practices.

In a competitive marketplace, getting an app created quickly can mean the difference between standing out and failure. Sometimes the best option for how to develop an iOS app is to hire out: either a mobile app development company (team of expert developers and UX agency services), and specifically with experienced iOS app developers, or a freelancer (solo developer). A team often comes with greater expertise and flexibility, not to mention reliability, to meet business goals. 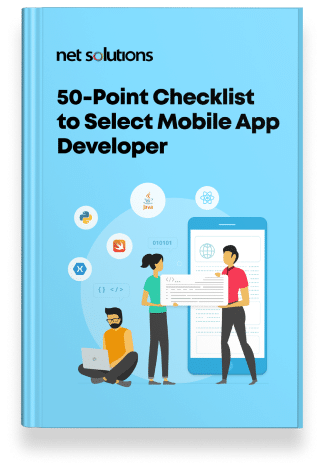 Learn How to Become an iOS Mobile App Developer

The iOS mobile app development tutorial can be simplified as follows:

To begin this iOS mobile app development tutorial, there are two main iOS programming language choices: Swift and Objective-C. Swift became the official Apple language in 2014 and, though a younger language, still has a wide base of support.

The iOS development learning curve depends strongly on any past knowledge of development, existing knowledge of programming languages, aptitude, and the time spent devoted to learning. In general, one can expect Swift to be an easier language to learn.

There are many fantastic resources available to learn how to code for Swift and for Objective-C. Look for the iOS app development tutorial that works best for your level of knowledge and working style. Following are the resources you can consider to learn iOS app development:

Before one can learn iOS development or make an app, one must first enroll in the Apple Developer Program as either an individual or an organization. There are more requirements for the organization than for the individual. Note, although there is a free account to download Apple tools to develop and test iOS apps, there is a membership fee to submit apps for review to the Apple App Store. Without the help of experts in design and user experience (UX) / user interface (UI), an app can look and feel unprofessional. However, Apple does try to take the guesswork out of UI design with SwiftUI, its user interface toolkit. SwiftUI uses declarative programming, which describes how the UI should look visually, with Xcode generating the code or the option to generate code with a real-time UI preview.

To get started on this stage of the iOS development tutorial: SwiftUI makes it possible to quickly develop and translate views for various platforms, with automatic adjustments of container sizes, padding, spacing, and colors for each platform.

While SwiftUI is powerful, it may produce complicated errors that are not yet well backed by documentation, with a less mature community ecosystem for help. Larger brands should consider hiring UX designers to create, test and implement a more customized solution. Ideally, both design and development are iterative processes, to seek and integrate feedback to ensure the app is meeting the business goals.

The next step in the iOS app development tutorial with Swift is to proceed with testing. During the building phase, Xcode provides a simulation app that can be used to see how the app will look and function on various devices. However, more thorough testing would involve the use of both tools (XCTest framework, iOS Unit test) as well as real testing by real users on various iPhones or levels of iOS.

Once the app is at a level that is relatively stable and receiving good feedback, it can be deployed to the Apple App Store for review. Pay careful attention to shifting App Store submission requirements and guidelines.

Note: All apps must provide users with the ability to delete their account from within the app, a new requirement that must be considered in the design phase.

Once submitted, there are about 2-3 days to get approval or rejection. If the app is rejected, that’s totally ok – it’s just a chance to make some changes and try again.

The key to learning how to develop an iOS app is to put it into practice.

If you take the time to learn iOS development, the first step is to master the iOS app development basic concepts. Create apps that have no purpose other than to test these sample functions and features until the concepts are understood. Apple provides many sample projects to start with. As this iOS mobile app development tutorial puts forth, it’s important to practice lots of different example apps that do different things to develop the experience to know what to code for each desired feature and how.

It is easy to simulate the iOS app within Xcode to test the app on an emulated device as if it were a real device. Regular simulation can account for different screen sizes, versions of iOS, and usability of components. Further testing tools can be used to identify bugs or performance issues.

3. Learn at the right pace

For a new programmer practicing 2-4 hours a day, expect at least 6 months to become fluent in whichever iOS language is being studied. However, as part of the iOS development learning curve, expect at least another 3-9 months to develop a new app.

Depending on the level of experience as a developer, the first app(s) created may not do what was intended or may have lots of errors or problems. Keep working! The average app takes anywhere from 3 to 9 months to develop for experienced developers.

Great iOS apps are not built overnight – and even the greatest apps need continuous attention to stay up to date with changing trends and requirements in technology and different design trends. Stay tuned to various blogs, news sites, forums, and podcasts or the official Apple developer news.

Developing an iOS app is easier than Android. It is because coding in Swift requires less time than in Java as the language has high readability. However, things may change as Kotlin advances further.

2. Are Xcode and Swift the same?

Both Xcode and Swift are app development products developed by Apple. iOS developers use Swift to create apps for iOS, macOS, tvOS, and watchOS. On the other hand, Xcode is an integrated development environment that comes with predefined tools to build Apple-related apps.

Developing an iOS app should not be an overwhelming process.

Hire our iOS development experts to build feature-rich iOS apps on your idea.