React vs Angular: 4 Parameters to Make Your Choice Easy

What is the most important thing you require to build a high-quality software product?

Selecting the right framework for a new JavaScript system, application, or website is a priority for any enterprise. The durability of the project, its ability to fit in the deadline, and its scalability is affected by the chosen framework. However, the amount of JavaScript frameworks is continuously increasing, thereby giving a hard time to CTOs in finding out the best technology stack for their product.

Out of all the powerhouses of front-end development, there is a considerable amount of debate on React vs Angular. ReactJS owned by Facebook and AngularJS managed by Google are advanced, high-performing, and widely adopted technologies, competing neck-to-neck to rule the front-end JavaScript ecosystem.

So, how are we supposed to decide the better framework out of the two?

In this blog, we have shed some light on a few key parameters that can help make your choice easy when it comes to React vs Angular.

DOM can be used in two ways: Virtual DOM or a Real DOM. The performance of the framework depends a lot on how it uses them.

Let us have a look at what Angular and React uses and how it affects their level of performance.

AngularJS uses Real DOM. It means even if a single section of the unit gets altered, the whole tree data structure is updated. For instance, if you wish to update production numbers within HTML tags, Real DOM will make sure that the entire structure of the HTML tags gets updated.

Sometimes, it becomes difficult to handle Real DOM because once you lose the flow, you will have to dig deeper into the codes to find out the actual issue. Thus, it becomes time-consuming and risky to attract a variety of bugs.

The Real DOM use by Angular results in slow performance of this Javascript framework. Moreover, it also affects its ability to build a dynamic software application.

However, while we are discussing AngularJS performance, it is important to mention the latest version of Angular: Angular 8, released on 23 May 2019. Angular 8 apps will be now high-performing because of ‘Differential Loading’ of modern JavaScript. Differential Loading lets you serve up different bundles to different browsers and make the application even faster. 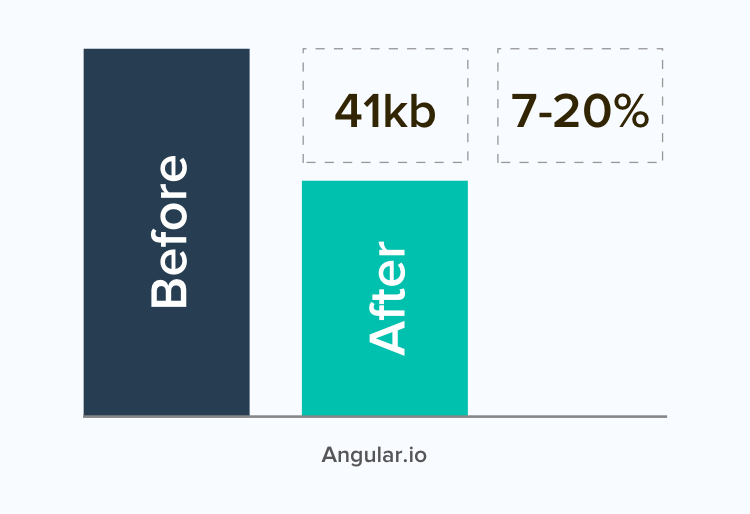 ReactJS uses Virtual DOM. It enables the development team to track and update the changes without affecting the other parts of the tree. For instance, if you wish to update production numbers within HTML tags, Virtual DOM will compare the differences and make the changes to the required part.

Moreover, it is not browser-specific and is provided in React package for free, making it lightweight, thereby minimizing the issues of slow performance of Real DOM.

2. React vs Angular: Use Cases 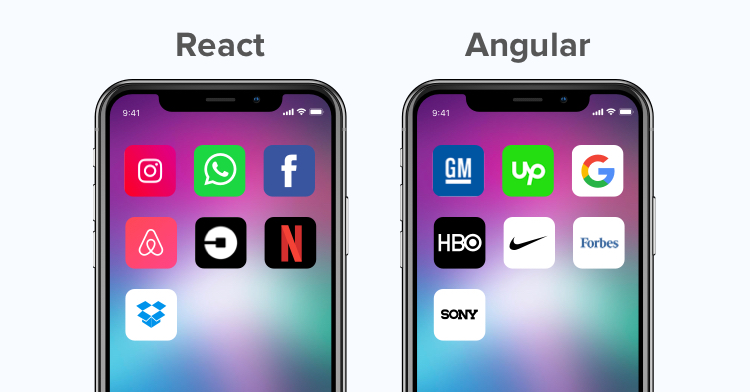 The angular framework is known for its holistic, well-maintained, and robust development of the project of any size. If you seek to get your app built that is compatible with all the browsers, then Angular development is an ideal choice to go ahead with. It even makes sure that your app runs on browsers older than IE8.

Following is a small list of apps that can be built embracing Angular Framework:

React framework is evaluating and complementing technology that offers good performance by default. It implies it is best suited for those websites that deals with dynamically modifying content. Thus, ReactJS is a perfect choice for web development if you seek to progress with a slower phase of development initially and then plan to add on more functionality in your application in the near future.

This dynamic nature of React framework makes it a popular choice and even browsers like Mozilla makes use of it to build the Firefox DevTools UI and debugger. The demand for React framework can be realized from the fact that browsers are optimizing for the performance of sites built with it.

Chrome in no-time optimized the V8 engine to boost the performance of array destructuring when React announced Hooks.

No other framework has reached such a critical mass as to have browser engineers cater to it this way.

“We’re thrilled to collaborate with vendors on specifications that advance the future of the web. That includes ongoing work on user interface responsiveness, display locking, main thread scheduling, and other initiatives like virtual scrolling APIs. Some of these collaborations are currently driven by Chrome, but we’ve worked with Mozilla, Apple, and Microsoft too on the topics where they were interested in our input.”

When it comes to React vs Angular Framework, ReactJS is considered suitable for light-weight applications, on the other hand, AngularJS is an ideal choice for heavyweight applications. In a nutshell, Angular and React framework in descending order based on their sizes are:

In the following section, let us get into detail on how framework sizes impact the software product development projects of your business.

Angular framework offers a lot to its developers (from built-in templates to testing utilities). Now, offering these definitely needs some space, making the size of this framework relatively big. Thus, it becomes unsuitable to use Angular framework for building light-weight applications.

Apart from this, what makes the AngularJS more speedy is its ‘Drag and Drop’ feature of version 7. Drag and Drop feature allows rendering, re-ordering and re-shuffling of list items automatically and dynamically. 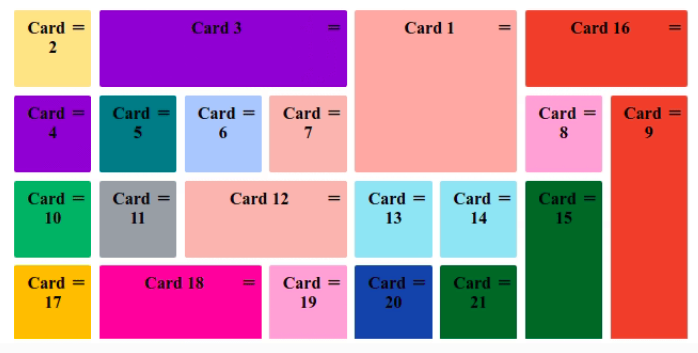 As React framework does not have the same offering as that of Angular framework, it is considered an ideal framework for creating light-weight applications. React framework is totally different from Angular as it requires support from third-party libraries for tasks like routing and all.

The involvement of third-party libraries affects its development speed and productivity.

When it comes to popularity amongst React vs Angular, React stands out to be more popular in 2019 if we believe the Stack Overflow Statistics and Google Trends. However, the positions change after every six months and a new winner pops up. But, React and Angular have always remained popular frameworks from a few past years.

a) According to the Stack Overflow survey, ReactJS is the most loved framework, followed by VueJS and AngularJS. 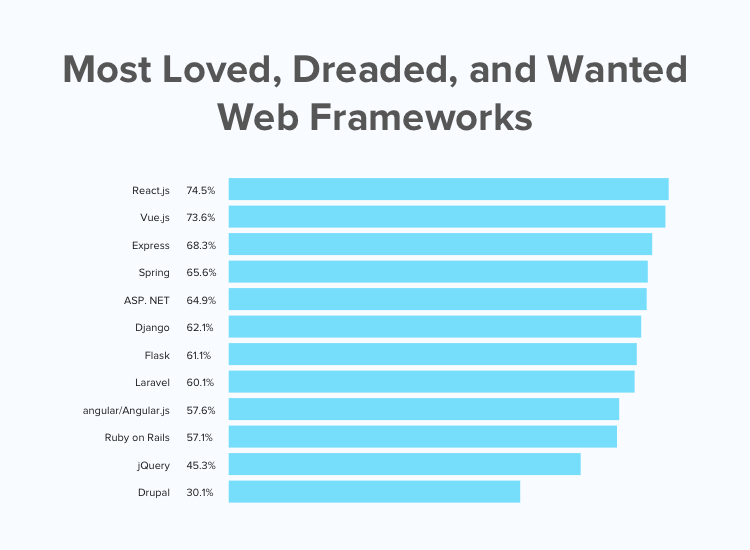 Undoubtedly, ReactJS has gained immense popularity since its launch in 2013 and it is still expected that this framework will rise more in the coming years.

b) The Google Trends story also suggests the same pattern: ReactJS leaving behind the AngularJS in terms of most popular searches. There is not a much difference in the number of searches between React and Angular in the year 2018 and 2019, making the popularity of React consistent over the span of a few years. 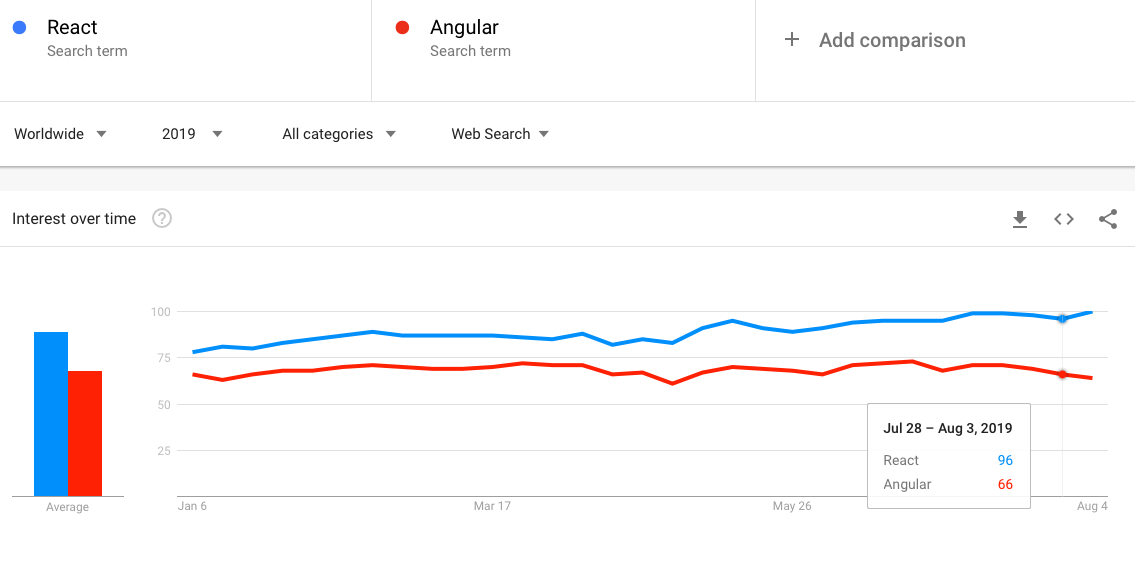 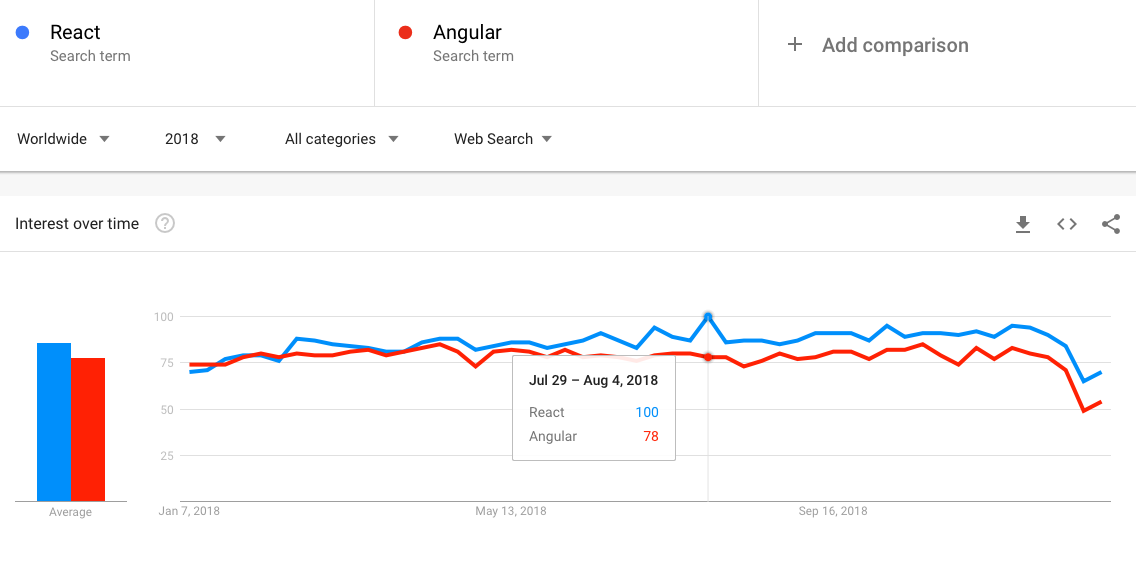 c) Have a look at the following graphical representation of the npm trends for the downloads and stars of React vs Angular. It can be inferred from it that ReactJS tops the chart, followed by AngularJS and VueJS. Moreover, when it comes to the number of stars, ReactJS beats the AngularJS. 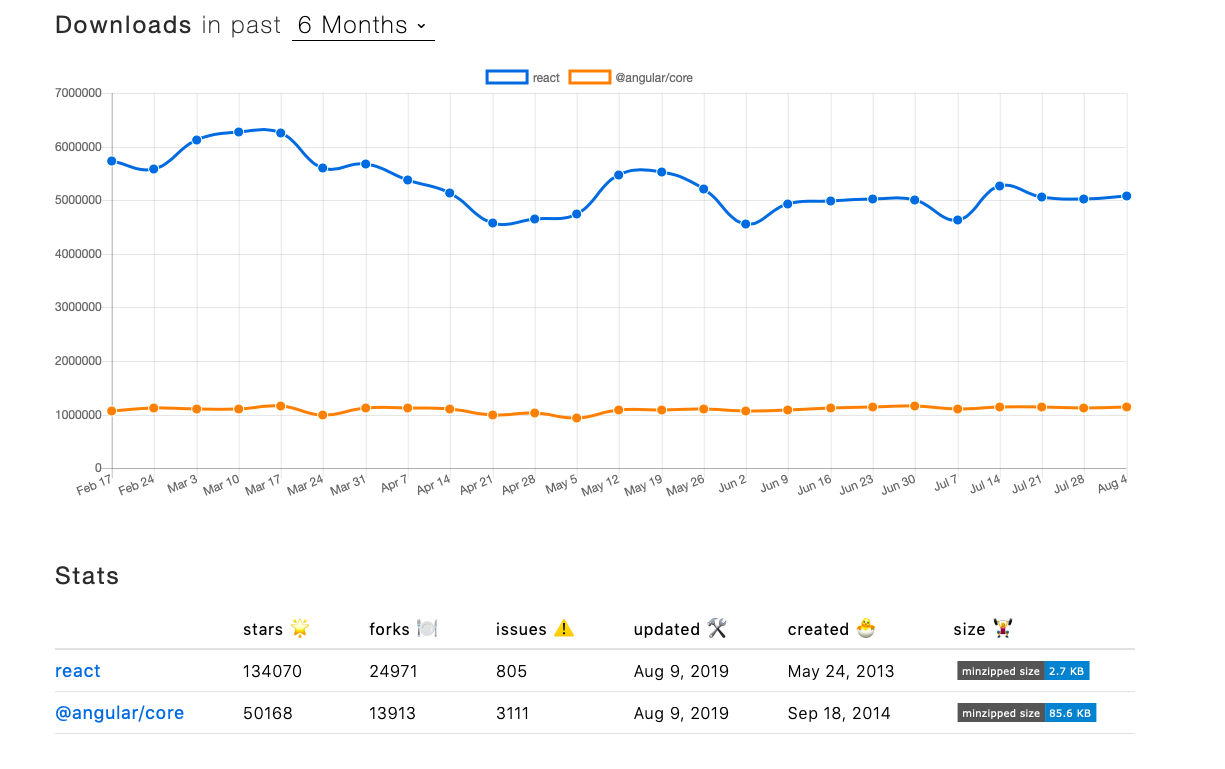 No doubt, it is clear from the statistics that React is the most loved and downloaded framework of the year 2019. However, it would be wrong to take these numbers and conclude that it is better than the other.

React and Angular frameworks offer different approaches to web application development for enterprises and startups. So, it’s hard to pick up a single winner from the battle of the two powerhouses of front-end frameworks. However, both of them are robust technologies, while none of them is better or worse than the other.

The single liner answer to which is the best framework—React vs Angular—for your next project boils down to your project requirements, complexity, and the experience of the digital experience agency you have hired to design, build, and grow your product.

Rishabh Sharma is a Python Developer and has also worked on various projects involving Internet of Things. He finds a special inclination towards machine learning and data analytics. He loves reading inspirational books and also finds a keen interest in poetry.