The accessibility of smartphones and the internet has led people to increasingly rely upon mobile applications for their daily needs. Unlike other electronic and digital assistants, smartphones are universally integral devices; everything is available on them. The availability of cost-effective options has led to an increase in dependency on smartphones, thus leaving developers confused when it comes to the native vs hybrid apps development debate.

“90% of mobile users spend their time in accessing applications, and the remaining 10% on the web.”– ComScore Stats 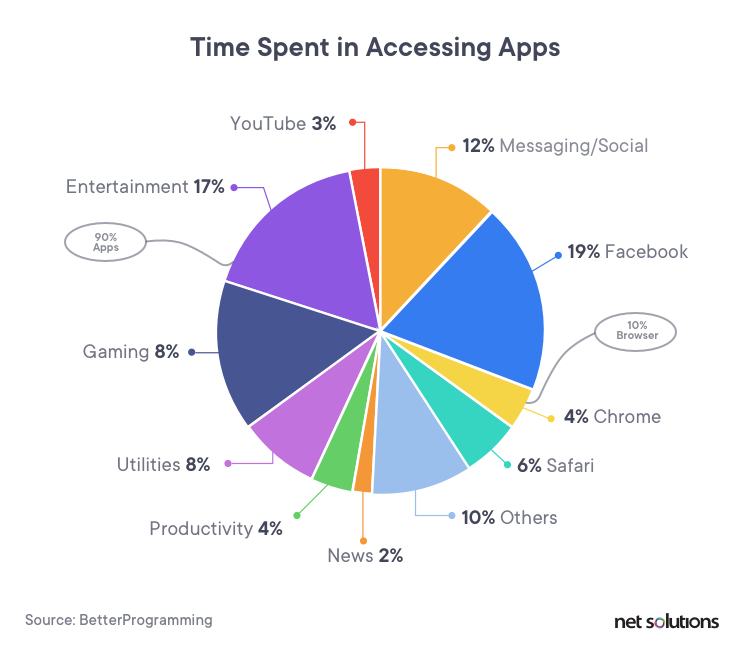 Choosing to develop an app for your business is quite a straightforward decision, yet that isn’t the case when it comes to selecting the type of mobile app development framework.

The variables and the technicalities involved in developing a mobile app can be overpowering for many. You may start to question which one is right for your business.

Here’s a look at the graph showing how often people open mobile apps every day. 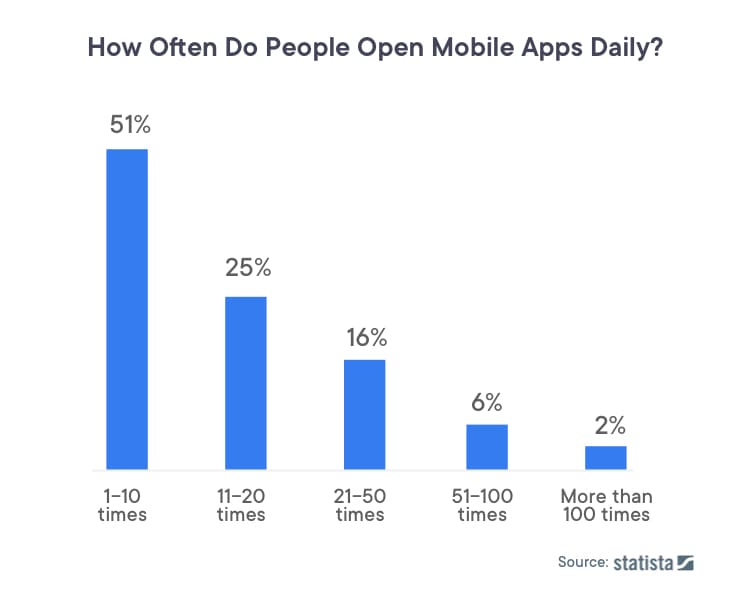 The current insights by Statista portray the number of mobile apps downloaded in the last few years. 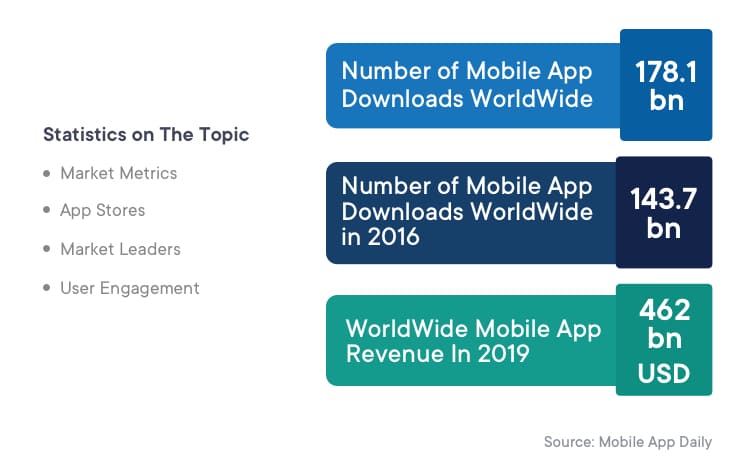 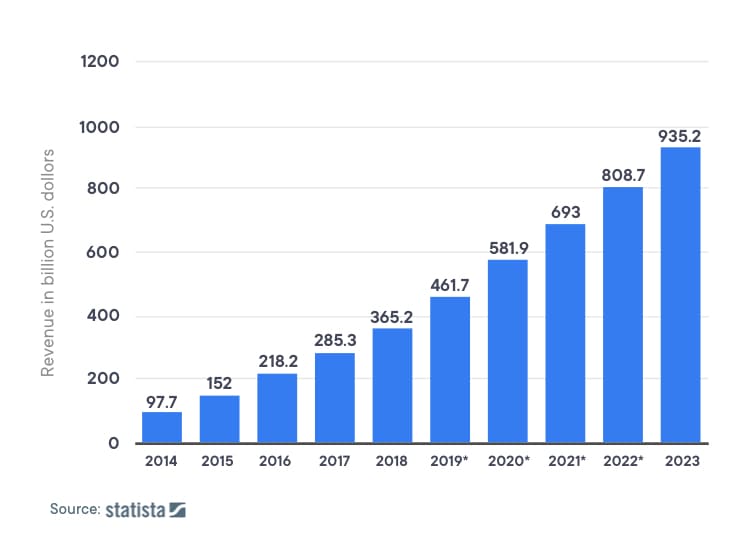 Over the years, mobile apps have become a strong extension of a brand, more so when the rapid developments in technology and its usage doesn’t give any indication of slowing down.

However, it’s a big challenge to get users to give a shot to your application. While designing the app, a good UX is what every app developer focuses on to make it successful. Today, every mobile app user expects a few things while downloading the app- ease of use, fast loading time, and delight during the interaction.

Choosing an approach for mobile app development is a daunting task. Different variables come into the picture here, like time to market, development cost, ease of maintenance, and so forth. But, if you’re in it to win it, what matters the most is app performance. It helps to draw out an excellent user experience.

What is a Native Application?

A Native app is a mobile app that is developed with the help of a programming language that works on a particular operating system, hardware platform, and software framework.

Native applications for iOS are developed with Swift, iOS SDK, and Objective C, whereas, Native apps designed for Android are written in Java language. If you develop an app for iOS devices, it won’t work for Android or Windows devices and vice versa.

What is a Hybrid Application?

A Hybrid app is a cross-platform app development app that works on various operating systems as well as environments including Android, iOS, and Windows.

Even though it may look and behave like a native app, it is a web app. Hybrid app development is done with the help of CSS, HTML5, and JavaScript. Hybrid applications run in WebView, which is an in-built program within the app that downloads the data as the user navigates via the app.

Among developers, enterprises, and tech-experts, the choice between native and hybrid apps has been a difficult one.

Let us look at the example of news applications – For any news app, it would make sense to use the native app development process, as there is an underlying need for consistent user experience. As a media enterprise, you do not want your users to struggle with the reading interface of your application, so having a native app pays off even if it takes longer to develop.

However, what if you are a startup? What if you are bound by multiple financial and logistical constraints when it comes to developing your app? It would be advantageous to build a hybrid app to cater to business requirements. To avoid the performance delay, focus on the critical aspects of mobile app development.

Generally, the trend for enterprises has been to start with a hybrid app, and once they have reached the break-even number for customer acquisition switch over to a native app.

For a hyperlocal service looking to make a place for itself in a highly competitive market, having a native app development process could be a financial liability. Given the insecurity of hyperlocal services, it pays off to start with a hybrid app framework.

An enterprise, along with the app developers, must create a final product that stands firm on UX/UI design. The success of any application depends upon the UX/UI in play, and if one feels that they cannot justify it through a hybrid app, they need to prepare themselves for the native app process.

Here’s a quick comparison between Native and Hybrid App:

Native App vs. Hybrid App — Which One to Consider for your Business?

Choosing out of these two is the most critical decision for businesses. Moreover, there is no straightforward answer to this question. As a matter of fact, it relies upon the nature of your business the projection one has for their own app, business aspirations, and the expectations of the target market.

It doesn’t matter to your users whether the app is Native or Hybrid, what matters is the user experience, which is also an essential factor in determining the success of your mobile app.

To begin with, you should zero on the objectives and needs of your business and what your users expect from your mobile app. For example, if you don’t wish to add many functionalities to your application, a Hybrid app might be the right option. You may also settle on a Hybrid app if you want to release the app fast instead of following a long development process.

If you want your app to work as a marketing tool for your business, going ahead with the Native app framework is the ideal decision. A native app can be useful to send message pop-ups, include share functionalities, and easier to customize as per the fluctuating needs of your business.

Businesses must also look for a solution that benefits in the long term. For instance, you might release an app with a Hybrid framework to check whether it works for your business or not. If the application ends up being successful over a period, you might want to include a few functionalities and its further development may end up being costly and tedious. At that point, Native app would seem more accurate.

How to Make Your Decision?

Clearly, there is no end to the hybrid vs. native apps debate, and with the gradual emergence of web apps, mobile app developers have a lot to choose from.

Given the numerous factors mentioned in this piece, choosing between the two might be a complex decision to make. However, to make the right choice, it is essential to understand both the frameworks with their pros and cons.

What one must remember here is that at the core of any and every development process is a need to create a design unparalleled in its functioning, and impeccable in its use. Make sure you collaborate with the best mobile app development partners who can offer and advise you on the ideal solution for your business needs.