How Rapid Prototypes Can Help in Validating Design Concepts?

The Design Concept – Where it All Begins

Even the best of user experience design begins as a mere idea. User experience design pros refer to these nascent ideas as “concepts”. Early on, they conduct ideation activities to generate as many distinct, evocative concepts as possible. But to move forward, these concepts need to be prototyped and tested. That’s where we start to talk about rapid prototypes.

Prototyping is a highly iterative process since designers need to create multiple prototypes of various fidelities and validate them every step of the way. This is done to select the best design direction from multiple options. This requires the designers to hone their skills in rapid prototyping.

The Essence of Rapid Prototypes

Prototyping is an integral part of the design thinking process. It consists of ideation, prototyping, and testing stages. It helps designers discover and validate the best ideas.

Prototyping is initiated after the ideation phase. Designers have ideated to come up with multiple design concepts that solve the problem they are designed for – the design challenge. Now that the design concepts are ready, the designer needs to realize them in the shape of prototypes. This will help them validate the best concepts and take them to the next stage.

As it happens many a time, the ideation phase results in multiple design concepts. Now, the challenge is to narrow down the various options to select the best concepts. Here is where the practice of creating rapid prototypes comes to the rescue.

Designers need to move from lo-fi prototypes to mid-fi in an iterative manner. Because it is an iterative process, prototypes are inherently meant to be replaced by something better.

Paper prototyping is an ideal process to test multiple ideas with stakeholders in a short period of time in a cost-effective manner. You can select the best ideas and take them to the next iteration. Because paper prototypes are low-fidelity, one need not spend time sweating small details.

The Process of Ideation and Creating Paper Prototypes

You can also create storyboards and use them to prototype your idea.

Moving from Lo-Fi to Mid-Fi

When moving from lo-fi to mid-fi prototypes, keeping things simple is key. In fact, the simpler, the better since rough prototypes tend to elicit feedback from customers on more fundamental aspects of the concept.

Grayscale wireframes are ideal as they are easy to create and help maintain focus on the concept and not on how it looks.

Paper prototyping may, however, be the best idea for sketching initial ideas in a jiffy, which also, nonetheless, makes us realize that ideas can be replaced and disposed of.

On the contrary, adding features that elicit feedback, accountability, and openness to collaboration is made possible through digital prototyping.

Here are some digital prototyping tools that are instrumental for the said process:

The prototypes need to be tested with every iteration. While prototype testing only gives you qualitative data but at the same time, they help you weed out the bad ideas rather quickly, thus helping you focus on perfecting the good ones.

Given that there are a couple of prototypes to be tested, setting up A/B tests can be helpful as all the prototypes can be tested in parallel. In A/B testing, you can test the designs that are radically different from each other. You will need to split your target audience and test the first prototype A with 50% of the audience members and prototype B with the other half. The goal here is to determine whether design concept A or concept B will solve the problem in a better way.

While testing, look at whether the concept is useful. It doesn’t all have to work, but it’s important to test detailed interactions where success is critical. The intent of prototype testing at this stage is to validate that the direction will work for customers, before putting time and money into making a fully functioning version.

While testing, you should get the user to work through the interaction as realistically as possible and then observe how successful they are. To add quantitative rigor at this step, you should track task completion rates.

Prototyping is an integral part of the design thinking process. It is a highly iterative process as designers need to create multiple concept prototypes of various fidelities and test their prototype every step of the way to select the best design direction. Following the right process, selecting the right tools, and collaborating with all stakeholders is the key to discovering and validating design concepts. 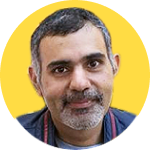