Flutter vs React Native vs Xamarin – Which Framework is Right For You?

What is best for mobile cross-platform development between React Native, Xamarin, and Flutter?

What is the best, Flutter or React Native?

How to compare Flutter vs React Native vs Xamarin in terms of feature-set and robustness?

These are some of the burning queries that are on the list of every app developer and business planning to build an app.

But why is the cross-platform app development under the radar of every business nowadays? Is it because of its various benefits or it’s just some FOMO? Let’s discuss it in detail.

Related Article: Where Do Cross-Platform App Frameworks Stand in 2020?

Today, there are more than 6 billion smartphone users spread across the globe, which are expected to cross 7 billion by 2021. Moreover, the importance of having an application for your business can be understood from the fact that the mobile app accounts for 57% of smartphone usage. 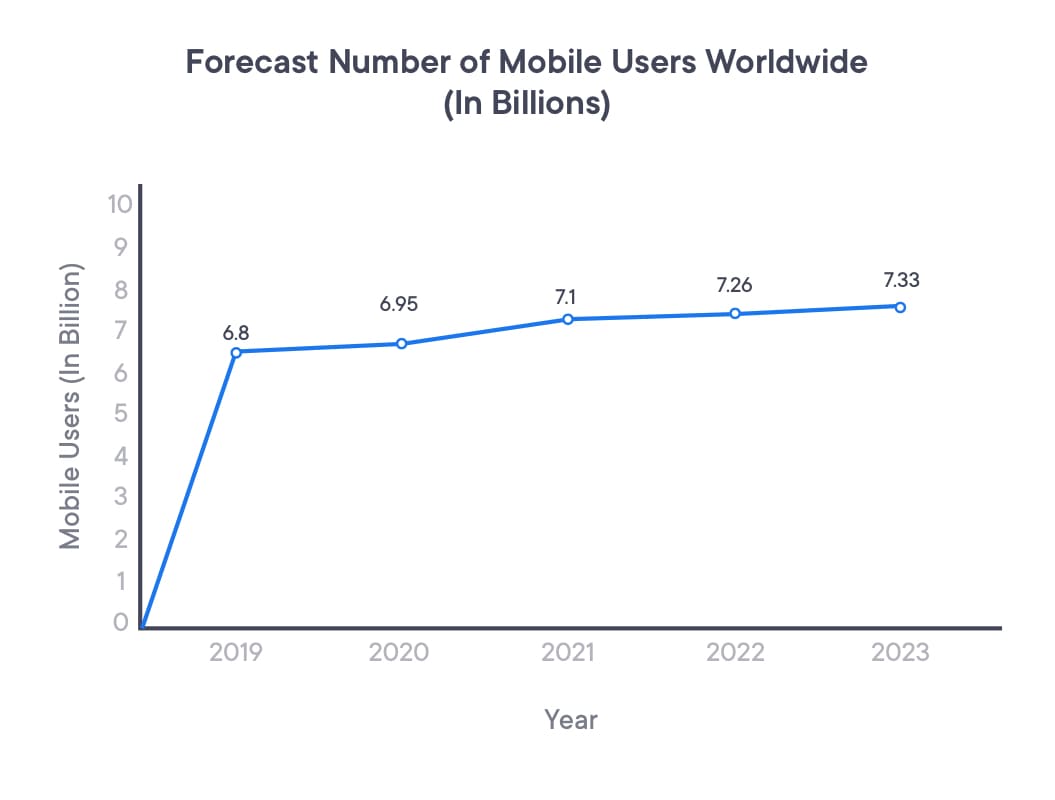 With the number of smartphone users growing at 2.2% every year, delivering a speedy, relevant, and great customer experience through mobile applications is the need of the hour. But this need to build an application gives rise to the following questions:

In this blog, we will be discussing platforms to go ahead with while building your business application.

The Selection of Platform for Your Business Application

The platform makes a massive difference.

If your business and functional requirements demand an application to build on both Android as well as iOS platforms, then cross-platform mobile app development is a perfect choice you should go ahead with as it allows the developer to run the same code on different platforms.

With hybrid app development, you will be able to cut the cost of mobile app development by half, along with shortening the development cycle and sharing approximately 97% of the code across various benefits.

We have discussed various cross-platform frameworks and the benefits of choosing the cross-platform in detail in the blog: Where Do Cross-Platform App Frameworks Stand in 2020?

Based on the various parameters, we will be discussing the most popular cross-platform frameworks–React Native, Xamarin, and Flutter–in this blog.

Flutter vs React Native vs Xamarin: The Comparative Analysis

To choose a winner amongst the top cross-platform app frameworks, Flutter vs React Native vs Xamarin, let’s first define the parameters based on which we will compare these frameworks.

Every 6 months, a new cross-platform app framework takes birth, thereby disturbing the position of popular frameworks. However, the position of React Native, Flutter, and Xamarin still remain the same (interchanging amongst each other).

React Native is the most popular cross-platform app framework followed by a tough competition between Xamarin and Flutter in which the latter wins by a little margin as per the Google Trends.

React Native Development was not the most loved choice since its inception. It had to sail through the gigantic waves to reach the top-most position. A huge drift can be seen between November 2015 to September 2016: the year when Xamarin topped the popularity chart leaving behind all other cross-platform app frameworks.

In mid-2017, you can observe the neck-to-neck competition amongst React Native and Xamarin Development. And finally, in 2018, React Native pushed back Xamarin to obtain the top seat amongst the cross-platform app frameworks. 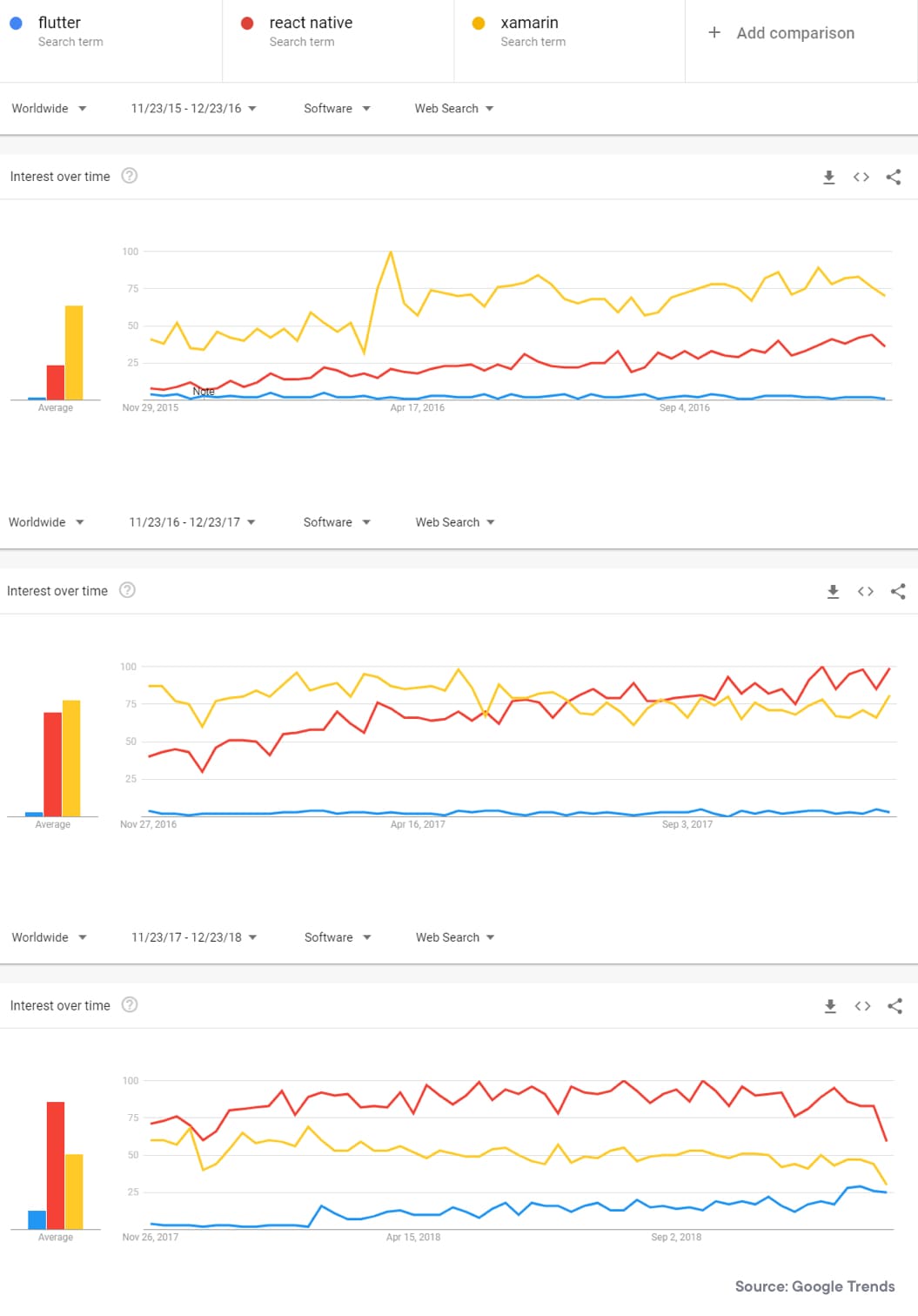 Maintained by Google, Flutter has left behind React Native in the Developer Survey Results, 2019, thereby becoming the 3rd most loved framework (Flutter 75.4% and React Native 62.5%). Thus it can be inferred that although Flutter’s community is much smaller, it is expanding pretty fast and will probably continue to do so.

One of the most important factors you should consider when choosing a cross-platform app development framework is app performance.

The performance provided by React Native is almost similar to native applications because of its ability to render code elements specifically to the native APIs. To write code for complicated operations, React Native allows developers to make use of native modules written in native languages.

Up to 80% of a codebase can be shared across platforms, depending on the complexity of the app.

Since React Native works on Javascript, a concern for rendering the large datasets emerge. Also, the framework is not built in conjunction with iOS or Android, thus it lags behind the native platforms at times. This is one of the reasons that Udacity stopped investing in React Native for new features.

Xamarin enables you to build and release apps fast. The latest update–Xamarin 4–includes a new set of features like Shell, Hot Reload, Hot Restart and Visual to simplify and drastically reduce development time. The features include:

The apps built on the Xamarin platform match the standards of native app development, which can be inferred from the following graph: 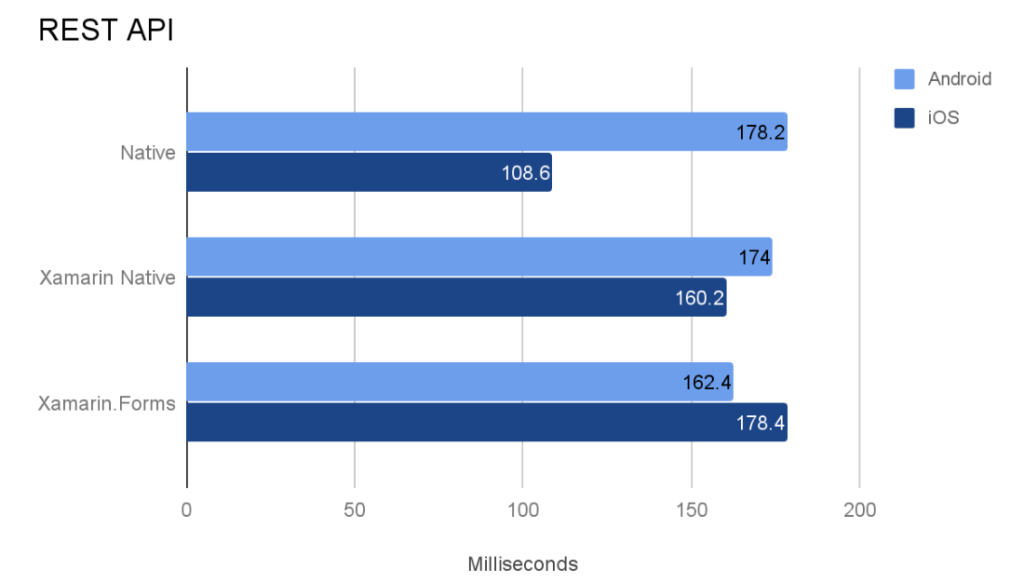 However, Xamarin is not recommended for apps that demand heavy graphics because each platform has a different method for visually laying out screens. A UX/UI-rich application is advised to be implemented natively.

Flutter is one of the best cross-app platform frameworks when it comes to speedy app development. The platform enables the developer to use native code so that the app can have the native feel, thereby delivering exceptional user experience.

The reason Flutter delivers the best performance amongst its competitors is the ‘Dart Code.’ This code is compiled to a C-library, implies it is most close to the native code, thereby eliminating the bridge of Javascript.

Moreover, the ‘Hot reloading’ feature of Flutter allows developers to see changes made in code within seconds as when using native technologies. It is one of the preferred platforms when it comes to MVP Development.

Flutter comes along with a number of widgets like navigation, scrolling, as well as fonts, thereby saving a lot of app development time. However, since Flutter-enabled apps are dependent upon built-in widgets and not platform widgets, therefore the size of the app is usually bigger: the smallest possible app made with Flutter can weigh no less than 4MB.

The architecture of a framework plays an important role in selecting a cross-platform development framework.

The modular and intuitive nature of the React Native framework allows developers to develop easily on an already existing project. This enables the development team to easily create updates and upgrades to web apps. 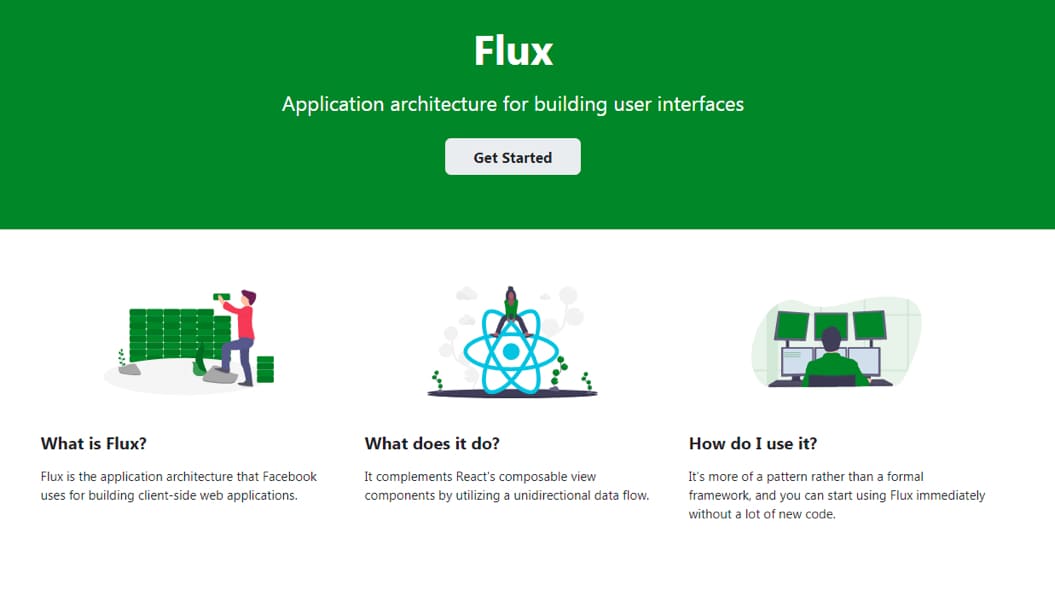 Xamarin architecture comprises of a visual design platform to build native apps. The iOS visual design has been given through their IDE to help developers in opening X-Code. LINQ can be used with collections or create custom delegates and events that free developers from Objective-C and Java constraints.

Xamarin uses MVC and MVVM (Model View View Model) architecture which accelerates the process of an app with less diameter. 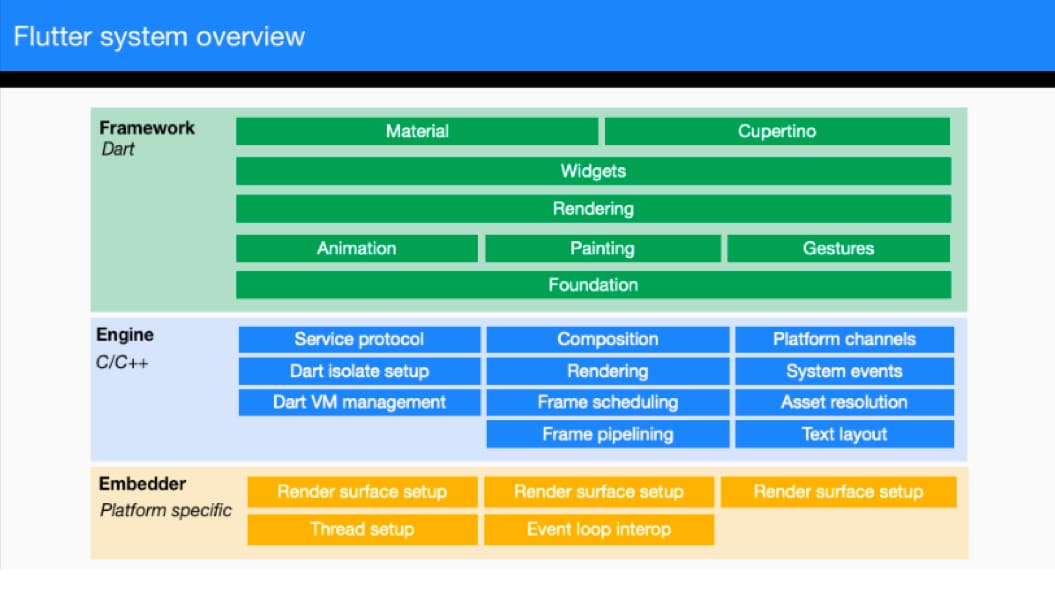 However, as discussed Flutter’s app size is the largest amongst the three frameworks, thus, developers get frustrated sometimes when the file size of the hello world app reaches 6.7 MB. The core engine of Flutter consumes up to 2.7 MB of the space + the code space, thereby making it a bit larger in the diameter.

Even after minimizing the app to 4.7 MB, it remains still bigger than many other cross-app development frameworks.

Building a strong user community as well as providing direct brace and direct communication with customers is crucial for pointing out the errors in the framework and providing support for the same.

React Native was born as a result of the developer community looking for an alternative to mobile, which would be a combination of superior mobile app development and a powerful and agile Native React environment.

React Native has strong community support. On GitHub, it has 83.5k stars and 2,000+ contributors who are dealing with React Native to enhance it. This framework has a large community of developers across the globe and they can assist you in answering your queries on QA sites and forums like Stack Overflow.

Xamarin has the least community support available amongst the three frameworks. Maybe because this platform isn’t free, and the user is required to purchase this cross-app platform.

Thus, for Xamarin, there is very limited community support available. Forums and help support are not instantly available for Xamarin users on the Internet. Therefore, it is no surprise that according to Github the number of repository, users, and contributors are nowhere near to the React Native framework.

Flutter is known for its good community support. On GitHub, it has 82.4k stars (very close to React Native) and 502 contributors who make the framework better. They work in different areas of Flutter to provide you the best development experience. Flutter developers are even active on QA sites as well as forums.

Google announced Flutter recently in February 2018 at Mobile World Congress and released its first version on December 5th, 2018, thereby investing heavily in it, and therefore it is expected to grow into a robust ecosystem in the future.

Flutter, React Native, and Xamarin are three frameworks, equally good at developing successful mobile apps. However, it’s really hard to say which one is better. All you need is to think which framework would be the right fit for your business. Some prefer coding to React Native while others like Flutter and a few consider Xamarin.