How to Use Data Science for Businesses to Boost Sales

Data science, one of the biggest trends of the current times, is still quite a mystery to many marketing & sales professionals. That has to change. Marketers need to uncover the right strategies to deploy data science for businesses to boost their sales as never before.

We need marketers & sales leaders to stop thinking of data science as a beast, a complicated multifaceted discipline loaded with complex algorithms, huge data sets, and mind-numbing use of statistical methods. You do not need a degree in electronics to operate a computer, do you?

Instead, let us change the view and explore how businesses can use it to drive sales.

Many a times, sales teams spend much of their efforts on the leads that yield no positive results at all. Marketers, having multiple leads daily, struggle to prioritize the leads and many a times end up spending time on the ‘wrong’ leads that cannot be rightly qualified as potential prospects while the real ones get sidelined.

This is where data science plays a huge role by bringing in what’s effective ‘Lead Qualification’. Lead qualification, basically means determining whether or not someone who is interested in your services is a good fit as a customer.

PoC (The Probability of Conversion)

PoC is essentially the method of assigning probabilities to the leads based on the information gathered during a lead creation.

Let’s look in detail how data science is used for PoC and thereby for lead qualification:

Data Collection and Analysis in PoC

Data collection and analysis is a crucial element of PoC. Data collected appropriately and analyzed efficiently can do wonders in figuring out the probability of conversion of various leads. The example below, best illustrates this exercise.

The data under investigation at a management school contained around 9000 records on the prospective leads. The fields contained different lead attributes as below:

After a detailed analysis of this data, it was found that the lead attributes of the 9000 records show a major correlation with the deciding variable, ‘Lead Result’. Figure 2 shows that the Lead Origin attribute has a major impact on whether the qualification of a lead. 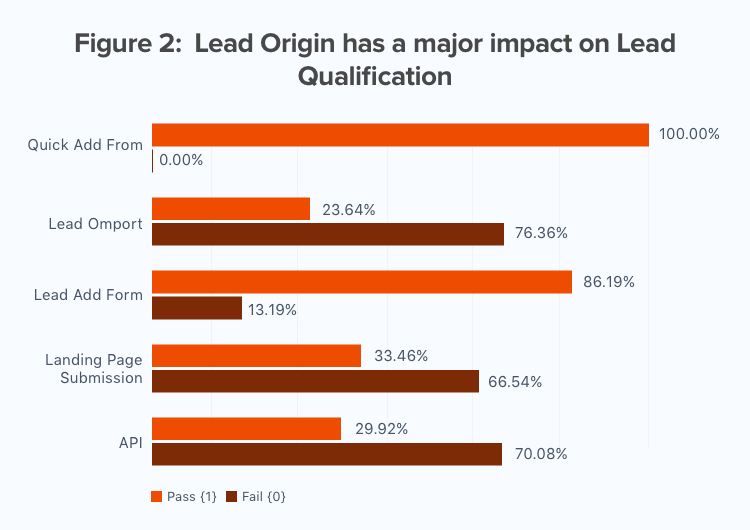 Additionally, it was found out that Lead’s age has a major impact on deciding whether a lead would get converted into a real opportunity or not. (As shown in Figure 3)

It is worthwhile to note that the Leads who do not wish to mention their age are less likely to qualify. 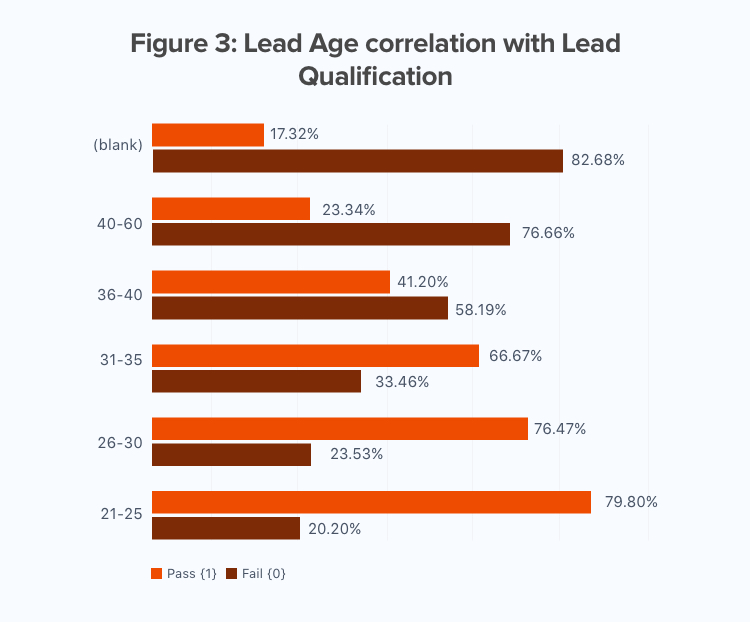 The above data analysis shows key relationships between various lead attributes and the lead qualification, thus setting the stage right for figuring out the PoC of various leads. The PoC model below further details out the path of application of data science in Lead Qualification.

The Application of the PoC Model

The PoC model makes use of a key element of data science, machine learning technology, to predict the probability of every lead’s conversion. When there are multiple attributes interacting, leveraging machine learning capabilities become inevitable.

Typical machine learning algorithms, including random forests and logistic regression are used to determine a prediction of the conversion of the leads.

In the leads example discussed in the previous section, since the dependent variable is a binary variable (Lead Result), hence when we want to determine the probability of a Lead to qualify, the Logistics Regression (which is best used for dependent variables) is a perfect fit.

Another way to test the model accuracy is to look at the ROC (Receiver Operating Characteristics) Curve, wherein greater the Area Under Curve (AUC) is, the better the model is. Figure 4 shows the ROC curve for PoC model wherein the AUC is higher than 50% (indicated by the orange line, bifurcating the graph area into 2 equal halves). 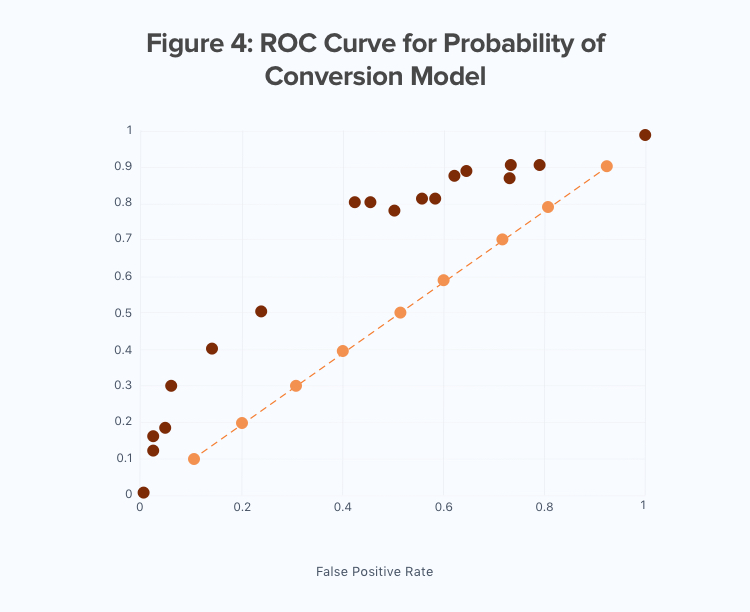 Thus, with the application of data science in the PoC model, the Probability of Conversion of various leads can be figured out effectively. Let’s look at some of the key benefits of using PoC for Lead Qualification.

The Key Benefits of The PoC Model

The direct tangible benefit of utilizing the PoC model is that it enables the sales executives to identify the ‘right leads’ to pursue that can wring in higher conversion rates for the enterprise.

Additionally, the intangible benefits of the PoC model are many like:

Probability of Conversion (PoC) is one of the key techniques that can help marketers and sales leaders improve the sales pipeline and focus on the right set of leads. Benefits of PoC can be extended to many other domains like retail, banking, IT, telecom wherein sales leaders usually look only at the CRM data to identify the right set of attributes for leads to achieve a higher conversion rate.

Paritosh is working as a product manager at Net Solutions. With over 10 years of experience, he has great passion for building and scaling lovable products. As a product evangelist, he also works on building and nurturing product community. He has a background in data analytics and loves to play around with data. On the personal front, he loves to work for the social causes, enlightening children on the importance of Life Value Education.