Data-Driven Vs. Data-Informed: Know the Difference

A simple example that explains the crux of data-driven vs. data-informed:

Netflix, the video streaming service faced internal disputes between its content team and the data team. The problem arose when they had to shortlist an advertising image for the show “Grace and Frankie.”

The team had decided to roll out an image that included Lily Tomlin because the data indicated that her image got more clicks when compared to Jane Fonda’s.

The debate started when the content team thought that Jane Fonda would be projected as an antagonist, and that would violate her contract too. That is, they looked beyond the data available and challenged it.

So, what did Netflix finally chose?

So, what do the two decision-making frameworks mean independently? Let’s have a look.

What does it mean to be Data-Driven?

Data-driven means to place the available data-set at the center of the table and make business decisions around it. In layman’s terms, following a data-driven approach means you follow the metrics and make decisions solely based on the facts & figures available at your end.

The mindset of data-driven business is that:

What does it mean to be Data-Informed?

Data-informed means to consider data-set as an essential source but use it as a context to understand the deeper, inherent meaning. In simple words, being data-informed means looking beyond what meets the eye so that better insights can be gained.

The mindset of a data-informed business is that:

Data is everything, around which the present and the future of a business revolves. Where some claim them to be data-driven, there are others who proudly call themselves data-informed.

But, is there a need to switch from a data-driven to a data-informed approach, and vice-versa? That is a key decision that you need to take down the line, only then can you grow and evolve with time.

Here are the major differences that your business needs to analyze and understand when data-driven vs. data-informed is the key question.

1. Going with the Flow Vs. Logical Counter Analysis

In a data-driven approach, your boss says:

The sales of product X is going down, as shown by the regional sales numbers across a period of time. And, the management decides to discontinue the product altogether without digging into the reasons behind the failure.

Inference: Data produces a result and all you do is believe it without further contemplation. In a data-driven approach, nobody questions data and it overpowers the decision making in the organization.

On the contrary, in a data-informed approach:

As a marketer, you will look beyond the numbers and understand why the sales aren’t picking up. What isn’t in place? What your competitors are doing? Is your marketing plan actually working?

Inference: In this case, you would consider data as a hypothesis and work your knowledge around it to come to a well-researched conclusion. Data-informed businesses pay heed to the curiosity that leads to questions, which further leads to meaningful insights that empower the decision-making process of the business. 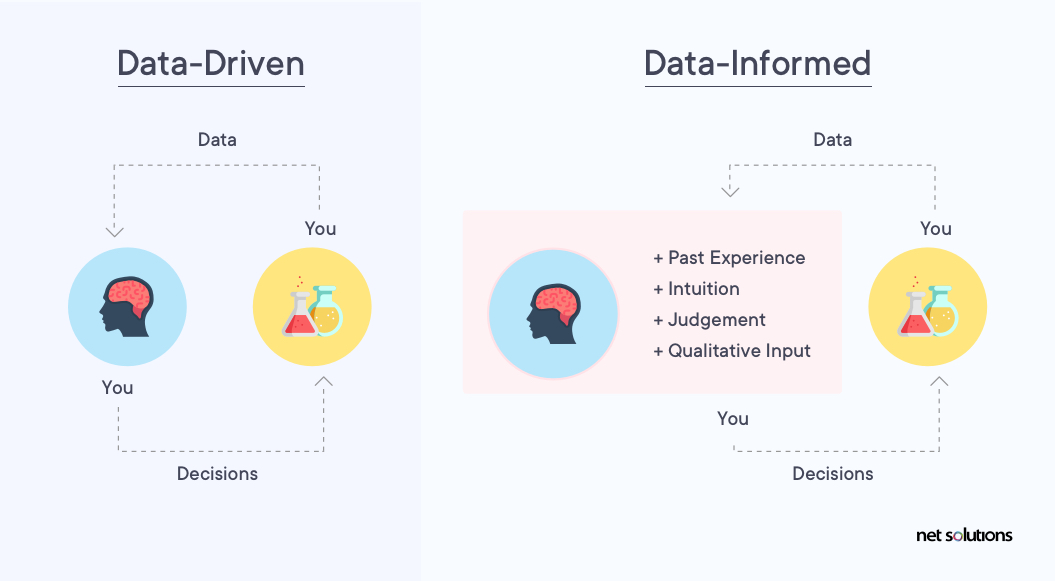 Key Takeaway: When it comes to data-driven vs. data-informed, the latter is a smarter choice for a business. When you choose questioning over going with the flow, nothing can stop your business from making progress. You could also try data science as a practice for making the transformation worth a million.

In a data-driven enterprise, data is the sole guide in making decisions! All the internal teams and stakeholders across the organization stay on the same page and there are no debates.

Thus the data-driven decision making is like a shining armor for fast-paced businesses as the human factor gets eliminated.

So, yes it looks more tempting to follow the footsteps of a data-driven company, as another study by Bain & Company points at the fact that data-driven businesses are five times more likely to make fast decisions.

However, that does not mean that data-driven culture takes all the brownie points as data has its limitations too. After all, data alone cannot make a product successful, but giving preference to the human mind can.

Example: When Amazon decided to launch “Amazon Prime,” no financially savvy person supported the idea. Even every source of data indicated that the venture would be a failure.

But, Amazon fended away analytics and considered other parameters too that made for a great business decision. And, look where they are today! 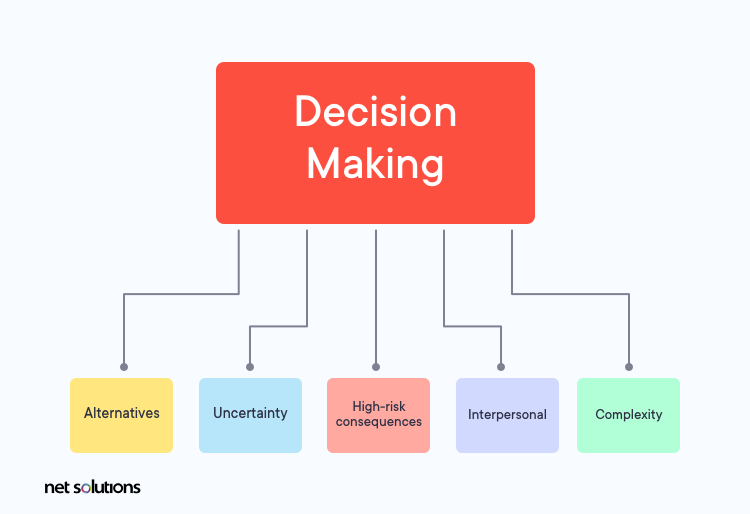 In the words of Jeff Bezos,

You collect as much data as you can. You immerse yourself in that data, and then make the decision with your heart.

Key Takeaway: Data-driven strategy proves to be a speedy decision-making process, which can be applied to reversible decisions or aptly where less risk is involved. But, where decisions are irreversible or tend to cost you much, following a data-informed approach is indeed a better strategy.

3. Combating the Data Inaccuracies is Essential

In this world, where 90% of the data was created in the last two years, which equates to 2.5 quintillion bytes of data each day, there is no proof as to how much of it is actually true.

Generally known as “bad data,” the inaccuracies in the data are common and are ruining customer experiences and sales. The problem lies in the business thinking here and the over-dependence on technology (that produces data) over their own wisdom.

Example: Hotjar, invested about 3500 developer hours and about $200,000 on creating its dedicated mobile app. This was because data said that about 51 percent of B2B queries come from mobile platforms.

This was when the team at Hotjar realized that they needed to look beyond the statistics. So, they applied knowledge, intuition, and the power of questioning to understand that the need was to improve their core functionalities and products first.

Here’s the kicker; you need to cultivate and encourage your gut feelings at the end of the day. And, that is what a data-informed approach strives for by fighting off inaccuracies by researching hard around the data available.

Example: Facebook used a “7 friends in 10 days” approach to retaining a user in its emerging phase. Initially, it was thought to be a data-driven approach, but it was rather a data-informed approach that relied on human instincts and research.

Facebook observed its users who stuck to them over time and how early friend acquisition led to their retention. Through analyzing this pattern, they came to the conclusion that users with many friends would feel the platform to be valuable. Now, this makes for the example of not blindly following the data.

So, what actually worked was data merged with Facebook’s young minds to foster a business that already enjoys 2.37 billion users worldwide. 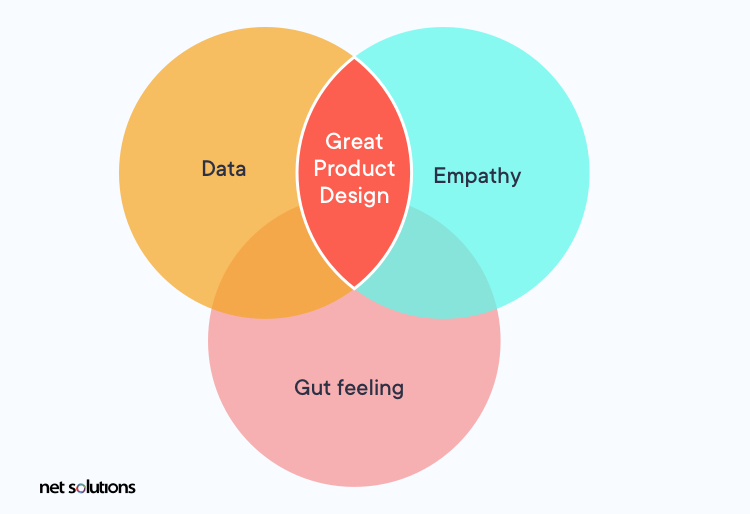 Key Takeaway: Data can be fatal sometimes, but it has its own significance. The need is to maintain a balance between data and knowledge. To be precise, your business decisions should be about 30 percent data and 70 percent gut feeling.

Data is abundantly available, but fetching value out of it is also equally important. The idea should be to analyze, share, and discuss data at hand. No progress lies in sitting and going by what the book says.

So who is the winner when it comes to data-driven vs. data-informed?

Start with breaking data silos across the departments, focus on relevant data and strive towards making your organization a data-informed business that is inspired by a data-driven model. You need not leave one behind to catch the other, rather, you need to strike a balance when it comes to data-driven vs. data-informed decisions.

We have given you the data, now it is your understanding as to how you make a well-informed decision that leads to business growth. Good Luck! 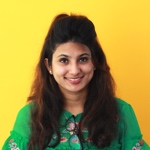 Divya is a Senior Business Analyst at Net Solutions. Her interest and experience lie in on-demand and digital education applications. The most crucial part of her work is managing key client relationships and consulting the prospects. She holds expertise in SDLC, Agile processes, user stories, creating prototypes, and testing end-to-end business flows.