5 Questions to Consider before Development of Mobile Apps for IoT

According to Gartner, IoT is a network of physical objects which contain embedded technology (such as intelligent sensors). These objects can interact, sense or communicate with internal or external systems.

According to Gartner, the total number of connected industrial, business and consumer ‘things’ is likely to reach 26bn units by 2020.

IoT devices include smart appliances that can be remotely controlled and accessed by consumers for preventive maintenance. IoT has become so pervasive that ABI Research expects that the number of IP-connected devices and sensors in the world will exceed 30 billion by 2020, thus impacting enterprise app development and development of mobile apps for ‘Internet of Things’.

There has been a consistent increase in the number of embedded devices small in size and connected to the internet in the recent past. A substantial number of IoT deployments is responsible for this, with apps such as home automation and industrial monitoring, among others. IoT may well be described as a new era in computing technology, leading unprecedented advancements in enterprise app development and development of mobile apps.

IoT is made up of billions of smart things connected with each other and can encompass all aspects of our lives, with its foundation being the intelligence that the embedded processing has to offer. In the IoT, smart machines communicate and interact with other machines, infrastructures, environments, and objects. The data generated as a result is processed into useful actions that control and command things to make our lives much safer and easier.

However, it is only after the development of mobile apps began to take off that the possibility of being able to send or receive IP-based data to devices that did not seem made for it began to take off. Such devices include toys, home appliances, cars, gas pumps, etc. It is only on that account that IoT has become the next big thing. According to Business Insider, the number of connected devices is expected to grow to 9 billion by 2018. One wonders what it could mean for enterprise app development?

In the case of enterprise apps, a facilities manager may, for example, use such apps for receiving real-time updates on conditions in a plant, which may include information received from sensors installed on equipment. The sensors may inform him about variances in temperature or vibration of machinery that may require preventive maintenance after further diagnosis. This entire scenario makes the presence of an effective enterprise app developer indispensable.

Mobile apps are heavily influencing the growth. The reasons include the following:

It is becoming clearer by the day that connectivity through mobile apps is becoming far greater than expected. Mobile apps are evolving further as more and more devices connect to the internet. As the environment becomes more connected, IoT brings with it new customized experiences and information from sensors connected to it.

For instance, there are Apple’s iBeacons, sensors connected to the internet that ties users’ physical presence in real time to the virtual world and leads to location data becoming actionable. A retailer may install iBeacons to prompt shoppers who are in his store to discover again digital coupons they may have saved earlier but forgotten.

While such iBeacon implementation is quite basic at present, in the future it could combine individualized information related to past purchasing behavior with sensor data. The retailer could match app usage analytics with data from location sensors to provide content that is even more personalized. That could include push notifications that are timed well and contain product recommendations based on the buying habits of users.

New types of experiences are also becoming a reality because of IoT. For example, smart homes are becoming possible on account of connected appliances such as the Nest thermostat. Development of Mobile Apps around a whole new device ecosystem as such experiences continue to give rise to new managed services.

There is a significant need for personalization of apps deployed for services related to smart homes. As new devices and features are added, there also is the need for rapid cycling through updates. It has become more important to have an effective strategy for management of the mobile app user experience, with IoT’s arrival, and this enhances the importance of a smart enterprise app development partner.

The world is preparing for the IoT ecosystem, as is visible from the rising number of Internet users and analysts, who are already scrutinizing the best strategies to build engaging and clever mobile apps for your smartly connected devices. However, if you haven’t given a rational deliberation to the important concerns related to building mobile apps for IoT, it is time you took the above-mentioned questions seriously or had an enterprise app development company answer them on your behalf.

Do you think the world is prepared to participate in the IoT environment? 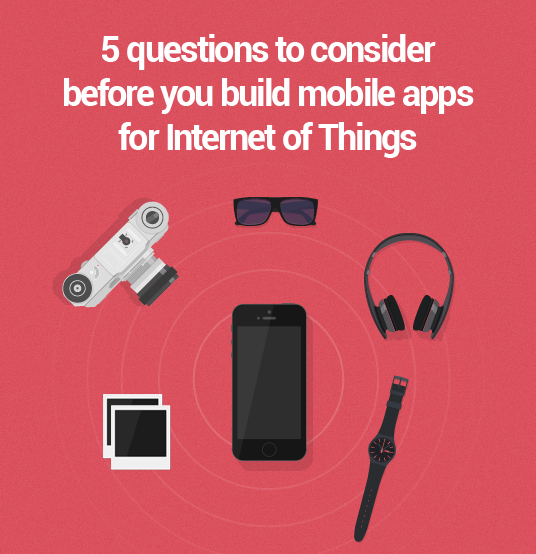