The world we live in is increasingly based on apps. Not only do we have apps on our phones, but we also have them in our cars and on our watches. Moreover, the best websites are adopting more and more features of apps.

Apps are the main way people use to interact with brands and to access information. As apps become an essential part of life, companies have to work on their strategies for mobile and apply new techniques and tactics accordingly to ensure their mobile apps don’t fail.

During 2013, the main focus of app makers and marketers was on acquiring more users. In 2014, as users spent most of their time on accessing media through apps, the focus shifted towards engagement and using data to make user interaction better. In this way, app makers and marketers have succeeded in making people spend more time using apps and improving app retention.

As 2014 comes to an end, developers and marketers aim to make the app experience even more personalized and to strengthen user engagement. If app makers tried to create apps for almost everything in 2014, they are likely to try to provide greater convenience through the apps in 2015.

Those who spend more time in an app the first time are more likely to quickly come back to an app and avoid the window for app churn.

According to a Nielsen report, the average smartphone has 41 apps installed on it and there are 1.2mn apps in the App Store.

1. Apps will have greater recognition as marketing channels and aid personalized marketing

Rich Mobile applications have gone far ahead of desktop internet usage in 2014.

The overall time in apps is expected to increase and smartphone penetration expected to reach 70% globally by 2017, according to an eMarketer report. This should lead to apps getting more recognition as marketing channels in 2015.

Companies will begin to look for ways to track users and engage with them through several channels. These include nuances related to apps and users, besides traditional channels such as web and email. Mobile leaders will differentiate themselves from those who lag behind through a holistic view of customers across several channels.

Companies will have to target users of apps just as they target people across other channels. App marketers should have the capability to export user data between channels if they are to be effective. They have to choose the best solutions available to meet their various requirements across email, the web and apps.

Besides acting as significant marketing channels, apps will let users personalize their app experiences to a greater extent. This will provide marketers the opportunity to create targeted content for users. For example, targeted push messages can increase app open rates, app conversion rates and app retention to a greater extent than generic messages.

Behavioral information, location and demographics are among the various types of data apps collect from users. With a wide range of data collected in this manner, 2015 will witness personalized marketing overtake generic app campaigns involving the same messages being sent to numerous users.

2. Predictive marketing through apps – ads will be based on your anticipated actions

You need powerful analytics if you are going to do smart marketing. Marketers collect huge amounts of data, but only action based upon it can impact the bottom line. They have to measure how their apps acquire, engage and retain users. In 2015, they will begin to predict what actions users are likely to take and act upon it.

The foundation is already in place for those who have invested well in mobile analytics. In 2015, they will create solutions leveraging analytics to create user segments. Once they put these solutions in place, they will automate marketing and retarget users who could churn or encourage those who seem likely to buy.

Predictive app marketing will help you understand and act upon what your users are likely to do before they do anything in 2015.

Google and Apple have prepared the ground for huge competition based on app ecosystems in 2015. This competition is likely to be based on app ecosystems for the home (Nest vs. Apple HomeKit), television (Apple TV vs. Android TV) and cars (Apple CarPlay vs. Android Auto). Whereas apps within ecosystems will work together, it might not be the case across ecosystems. Therefore, customers can be expected to choose either one ecosystem or the other. Other ecosystems for various devices, such as those by Amazon and Microsoft, could also emerge but not gain much success in 2015.

4. Decision making will be increasingly based on data from apps

You will begin to create and track more data than before with the increase in sophistication of mobile apps and growth in the market for wearables in 2015. Apps will begin to track not only your steps but also your breathing, your TV watching habits, your food intake and even your happiness. You will choose the data you want to track in this manner and make more decisions based on it than before.

As app makers will provide more actionable insights based on the new capabilities for collection of data, you will have better information and more success.

5. Apps will provide convergence and be cloud based

The significance of app integration across various devices will increase as the popularity of owning several devices such as laptops, smartphones, tablets and wearables increases. You will need apps to have your digital identity on a number of devices together and to synchronize them irrespective of different platforms.

Users will have to depend on the cloud even more for such integration of devices. That’s because their personal information and apps will live on the cloud rather than their own devices. This will also let you move better between your devices in accordance with your life and work demands. Every app will perform equally well on all platforms and you will not have to go to your desktop when you require full functionality. So, as you will be able to work on any device or platform, the importance of laptops and desktops will decrease.

6. Apps will be made using pre-existing components

When enterprise mobility was in its early days, developing basic app functionality was most important. However, the standards of mobile innovation have continued to rise, whereas delivery times have been decreasing. This is forcing app makers to move away from building everything in-house. So, in 2015, development teams will combine pre-existing components for the front end or build them if they aren’t in existence already.

7. Websites will become more app-like in terms of personalization and interactivity

In 2015, apps will not only cross over to other devices but also other forms such as websites. In 2014, websites increasingly began to acquire functionality similar to apps. To replicate the kind of experience that users of apps have begun to expect, creators of websites are including characteristics such as automatic updating, responsive design and two-way communication.

Since static web pages don’t work well with small screens, websites will have to meet the user experience and interactive standards of mobile apps. The disparity between the way information is displayed on mobile and the web will continue to decrease in 2015.

8. Mobile ad remarketing beyond apps – ads will appear even after you close the apps

In 2014, app marketers have seen that users acquired through mobile ads and users acquired organically perform equally well. In 2015, they will try to maximize the returns on ad spending even further. Using remarketing through mobile ads, they will be able to win back churned or indecisive customers. They will target the customers through ads outside the apps. Users who were quite close to an action desired by the marketers, but closed the app without taking action, will receive reminders outside the app.

In 2014, push and in-app messaging strengthened their places as means to encourage users to take certain actions. 2015 will witness the next step in user engagement, i.e., re-engaging users outside apps through personalized ads.

The hacking of digital platforms and information leaks in 2014 resulted in the theft of personal and financial information for thousands of people. Obviously, the security measures in place currently are not adequate.

In 2015, app makers will try to enhance security systems so that even the people concerned the most about privacy can share their photos, contact details and banking information with apps. Although the battle against hackers will remain in the news, you will have safer apps.

10. Apps will provide better UX and be more specialized

Instead of serving as tools with multiple functions, apps will focus on specific ones for specific users and, so, become more specialized. Your mobile devices will resemble toolboxes with specific tools for all jobs, instead of containing a few apps of your choice. There will not only be tools with a lot of variety, but particular versions of tools.

So, the importance of positive user experience will increase even further. Successful apps will be intuitive and have one-touch operation.

11. Apps will join the offline and online worlds

Leading restaurants have begun to provide mobile apps that let users order and pay from anywhere and then go to a restaurant to pick up their food. Both Amazon and Google are trying to make sure that you don’t have to go to a store, as they bring forth programs for same day delivery. At the forefront of the programs are their apps. Who gains supremacy could well be determined by whose mobile app is more user friendly.

In 2015, you can expect your life to become more convenient through apps that help you make payments, work out, get deliveries and order food.

In 2015, app makers and marketers will make your life easier and find more ways to reach you with personalized product and service offers.

Do you have additional predictions for mobile apps for 2015? If so, please share with us in the comments section. 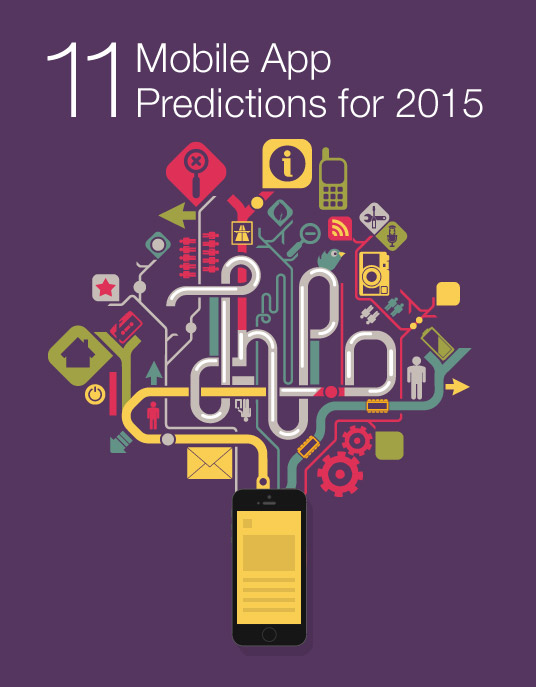